Mockingbirds are cool. We have a few at school, and one likes to play games with me. He’ll fly beside me and stop a short distance in front of me while I talk to him. When I get within four or five feet, he flies a little further. Never does he seem intimidated.

I did some research on mockingbirds and found that behavior to be typical. Mockingbirds are smart and have great memories. Like crows, they remember if someone has been aggressive toward them. I haven’t.

A few weekends ago I was working on the greenhouses and this mockingbird shadowed me. He shifted around a little but basically stayed in my vicinity even though I was using power tools. I soon noticed he didn’t have a constant call. He’d make a robin call and a cardinal call interspersed with others I didn’t recognize.

Mockingbirds get their name from mimicking the sounds of other creatures. They copy the calls of other birds to ward off predators, but I think they imitate mostly for the fun of it. That one stayed with me for a few hours while I talked to it and ran saws and drills the whole time.

I’ve read where people have been attacked by mockingbirds, but I’ve never witnessed anything like that. I’ve had swallows divebomb me before but never mockingbirds.

For those not familiar with them, mockingbirds are small to medium sized somewhat long-legged gray birds with white patches on their wings. The underbelly is lighter colored. Their wingspan is slightly over a foot long, and their beaks are pointed and nearly black.

Mockingbirds prefer to live in an edge type habitat, where there are some open places interspersed with trees and shrubs. They like to have a few high perches to choose from. Normally, they nest only a few feet off the ground, but sometimes they make their homes much higher.

Mockingbirds are monogamous. Often you see them in pairs, and they work hard to find a mate. During the spring mating season, they are especially noisy.

Unlike most birds, it is the male who does most of the nest building work. The outer part is constructed of twigs, but the eggs lay amidst finer delicate materials. Each nest takes a couple days to make.

These noisy birds don’t often reuse nests either. Some couples may raise several clutches each year and use a different nest each time.

Females lay three to five pale bluish-green eggs and they hatch in less than two weeks. Only females incubate eggs, but both parents feed the young for 10-12 days. The whole nest construction to fledging process takes less than four weeks. Then they start all over again.

Mockingbirds are not picky eaters. They eat insects when they are available. Beetles, wasps, ants and caterpillars are their favorite. When insects are scarce, they eat seeds and berries.

There are some mockingbirds that migrate southward for the winter and return to breed in northern climates. Around here, they’re year-round residents. Enjoy them, talk to them and they’ll talk back. 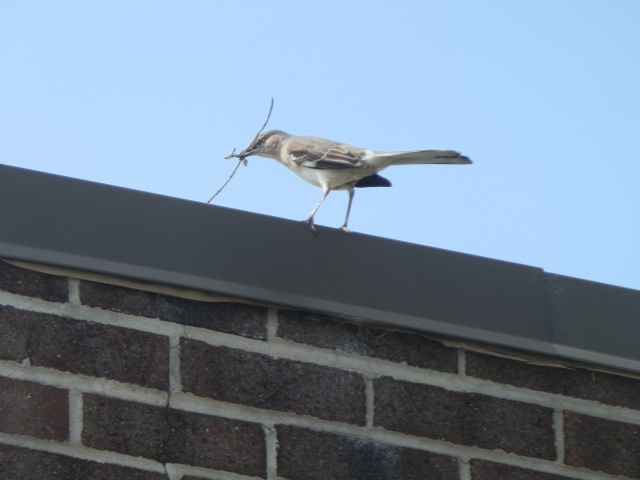 The male is busy with nest building duties. 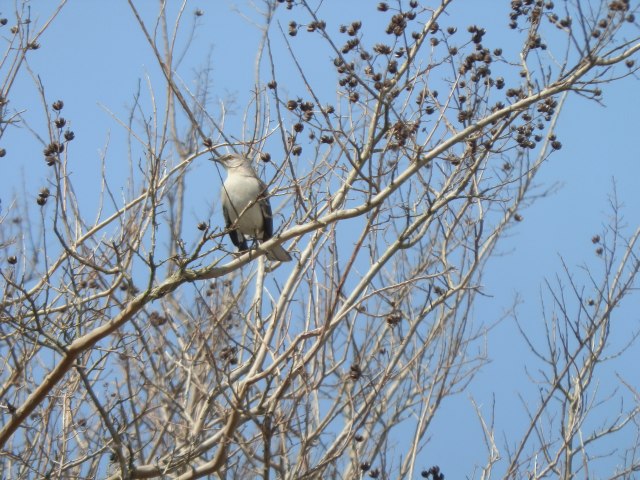 His mate waits patiently in the upper branches of a crape myrtle.

I grew up in Old Town Maine and got a B.S. at the University of Maine in Plant Sciences/ minor in Botany. From there I moved to West Virginia and earned a M.S. in Agronomy at WVU. I also met my wife there. She grew up in rural WV as the daughter of tenant farmers who raised cattle and hogs. Their lifestyle at times was one of subsistence and I learned a lot from them. I've always been a foraging buff, but combining my formal botanical knowledge with their practical 'Foxfire-type' background opened up my eyes a little more. I now teach agriculture to high school students at Northeastern High School in Elizabeth City, NC. My wife teaches with me and we make a great team. I also write a weekly nature/foraging column for the local paper (dailyadvance.com). I also have written several Christian nature/adventure novels that I plan to publish eventually. One is a five book family saga I call the 'Forgotten Virtues' series. In the first book, Never Alone, a young boy comes of age after his father dies in a plane crash, and he has to make it alone. Never Alone is now available in paperback, Kindle and Nook. The second book, Strange Courage, takes Carl from his High School graduation to his recovery from a nasty divorce. The third book, Second Chances, takes Carl from his ex-wife's death and the custody of his son to his heroic death at age 59. The fourth book, Promises Kept, depicts how his grandchildren react and adjust to his death. In the final book, Grandfather's Way, his youngest and most timid granddaughter emerges from the shadow of her overachieving family and accomplishes more in four months than most do in a lifetime. I use many foraging references with a lot of the plants I profile in these articles in those books.
View all posts by tedmanzer →
This entry was posted in Uncategorized and tagged dive-bomb intruders, edge-type habitat, high perches, intelligent birds, long-legged gray birds, mockingbirds, monogamous, noisy birds, territorial. Bookmark the permalink.