Florida Betony – If you can’t beat it, eat it

Sometimes the battle can seem hopeless.  Florida Betony (Stachys floridana) is a highly invasive cool season weed.  To make matters worse the square-stemmed devil is a member of the mint family, which causes most gardeners to draw a deep sigh.  Worse yet, it’s a perennial to boot.  Simply getting rid of the seed won’t save you when winter arrives.

It spreads by long rhizomes with white tubers on the end that look like rattlesnake rattles, hence the common name of rattlesnake weed.  These tubers can reach lengths of well over a foot long on sandy soils, but three to five inches is more common.  I’ve been able to control it with Round-up, but the process can take several applications.  The detached tubers aren’t affected by the herbicide and can sprout when conditions are right.  Also, Round-up is non-selective and will kill your ornamentals if the spray hits them.

If the problem is in your lawn there are broadleaf weed killers that are labeled to do the trick, but repeat applications are also necessary.  Even if used properly they are not always totally effective.  I have found formulations containing Mecoprop to be the most effective, but this chemical is also very effective at killing flowers and shrubbery.  For those who prefer not to use herbicides, be prepared for hours of hand weeding and I mean copious amounts.  You’ll still lose.

There is a silver lining though.  Those long slender tubers are not only edible, they’re quite good.  They have a pleasing crunchy texture. The flavor reminds me of a cross between a water chestnut and a very mild radish.  I like them raw or stir fried. There are only about 75 calories per hundred grams and virtually no fat.

They make a great crunchy addition to a salad and can be pickled using your favorite brine recipe.  My mother has a sweet one that calls for peeled ripe cucumbers without the seeds.  This recipe also makes great pickled cauliflower.

Scrub them with a stiff plastic bristled brush or rough wet cloth to remove any soil residue.  The skin is not objectionable.  The tubers may be sliced and used as a substitute for water chestnuts.  Likely none of your friends will even notice.  Those that do might think they are eating expensive French crosnes or Chinese Artichokes, close cousins (Stachys affinis.), which can sell for as much as $150.00 per pound.  Sometimes you hear them called chorogi in Asian recipes.

I was playing around on the internet recently and found a website selling Florida Betony tubers for $20 per pound.  On a few occasions I’ve discussed this weed with my friend, Tom Campbell, Horticulture Extension Agent for Pasquotank County.  I have no extra time to fool with marketing it and neither does he, but we’ve both speculated that some enterprising soul could take it and run with it.  I’d like to see more of that.  Collecting and selling Florida Betony might fill a niche market and make some ambitious gardener a little money.  Let’s hope so.

Scrub tubers and cut if necessary to fit into jars.  Mix in peppers and put into kettle with chopped onions and add vinegar to only 3/4 depth of vegetable(about 1 quart).  Mix sugar, turmeric, mustard seed, celery seed, and salt; add to contents of the kettle.  Mix well and cook slowly at simmering temperature until pieces are just tender and can be pierced with a fork.  Ladle into hot sterilized jars and seal. Recipe is great for ripe cucumbers or cauliflower. 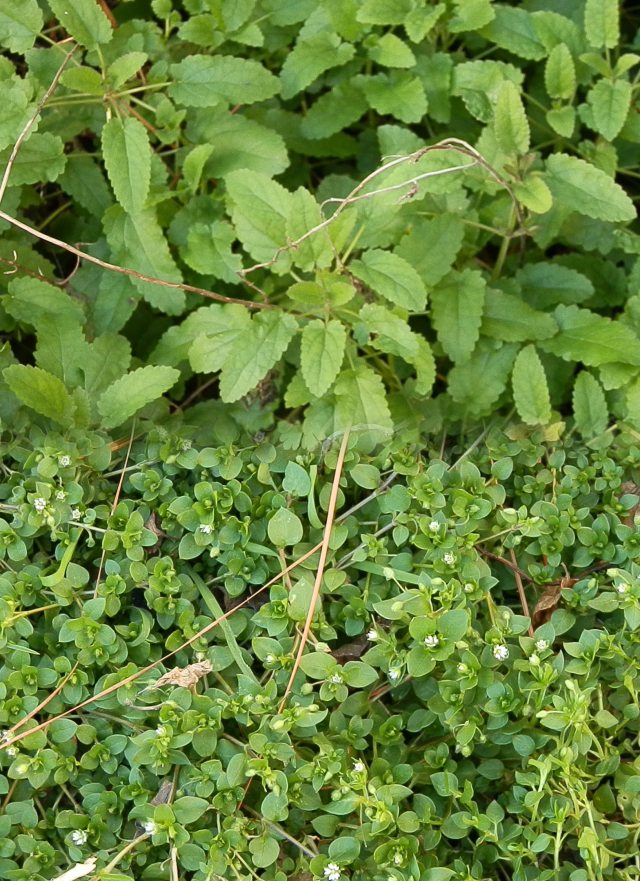 Florida betony above common chickweed below

I grew up in Old Town Maine and got a B.S. at the University of Maine in Plant Sciences/ minor in Botany. From there I moved to West Virginia and earned a M.S. in Agronomy at WVU. I also met my wife there. She grew up in rural WV as the daughter of tenant farmers who raised cattle and hogs. Their lifestyle at times was one of subsistence and I learned a lot from them. I've always been a foraging buff, but combining my formal botanical knowledge with their practical 'Foxfire-type' background opened up my eyes a little more. I now teach agriculture to high school students at Northeastern High School in Elizabeth City, NC. My wife teaches with me and we make a great team. I also write a weekly nature/foraging column for the local paper (dailyadvance.com). I also have written several Christian nature/adventure novels that I plan to publish eventually. One is a five book family saga I call the 'Forgotten Virtues' series. In the first book, Never Alone, a young boy comes of age after his father dies in a plane crash, and he has to make it alone. Never Alone is now available in paperback, Kindle and Nook. The second book, Strange Courage, takes Carl from his High School graduation to his recovery from a nasty divorce. The third book, Second Chances, takes Carl from his ex-wife's death and the custody of his son to his heroic death at age 59. The fourth book, Promises Kept, depicts how his grandchildren react and adjust to his death. In the final book, Grandfather's Way, his youngest and most timid granddaughter emerges from the shadow of her overachieving family and accomplishes more in four months than most do in a lifetime. I use many foraging references with a lot of the plants I profile in these articles in those books.
View all posts by tedmanzer →
This entry was posted in foraging and tagged edible tubers, Florida Betony, mint family, weed. Bookmark the permalink.