The name sounds a little imposing, but fear not. Prickly lettuce (Lactuca serriola) forms the backbone of a fine salad if collected when young. Older specimens can be bitter, particularly when they are flowering, so don’t eat them.

Prickly lettuce is a winter annual that thrives in cool weather. It tolerates a wide variety of soils, so it’s usually more adaptable than what you are trying to grow. Leaves emerge in basal rings and initially look like dandelions. This shouldn’t be a major surprise. Along with sow thistle they’re in the same family. Unlike dandelions, prickly lettuce sends out a tall stem and can get over five feet tall.

Modern domestic lettuce evolved from this Eurasian immigrant as well as a few other Lactuca relatives. Plants will hybridize with domestic lettuce, so there is great genetic variability in this species. It is an aggressive weed and makes its presence known in our soybean and wheat fields. This cosmopolitan invader can be found over most of North America.

Leaves have a row of weak spines along midrib on the underside. Sow thistles have spines along leaf margins, but not on the midrib. Neither has a roughness that is objectionable.

Flowers are yellow and dandelion-like. Upon maturity they turn to white down and blow away. Avoiding this phenomenon is helpful for homeowners. The prolific seed producer will find its way into places you don’t want it, like vegetable and flower gardens.

Should you decide to eat it, flavor is less bitter than dandelion but not quite as refreshing as sow thistle. In the rosette stage, flavor approaches most domestic lettuce. Eat it raw or lightly cooked, but I think its greatest asset is as a lettuce substitute or companion in a salad.

Some people develop an upset stomach if they go overboard and eat too much. I must have a strong digestive system as I’ve never noticed any ill effects. As with anything new, never eat too much the first few times until you know how your body reacts.

When consuming this weed avoid the milky juice that accumulates near the flowers. It contains lactucarium, which can be found in domestic lettuce in lower concentrations. Lactucarium has been used as a pain-reliever, sedative and diuretic, but don’t play doctor. Prickly lettuce juice should be used with caution and never without the supervision of a knowledgeable medical authority because of its mild narcotic properties. The bitter juice is more concentrated when plants are flowering. Even normal doses of lactucarium can cause drowsiness. Too much could cause restlessness and an overdose could cause death through cardiac arrest.

One of the best ways to eliminate prickly lettuce is cultivation. It has been a much greater problem for farmers since limited tillage cropping systems have become popular. Clean tilled crops rarely have much incidence of this weed. Several herbicides are effective at controlling it, but prickly lettuce has shown adaptability to develop resistance to some chemicals. Rotating chemicals is often helpful. Reducing the amount we must use is even better. 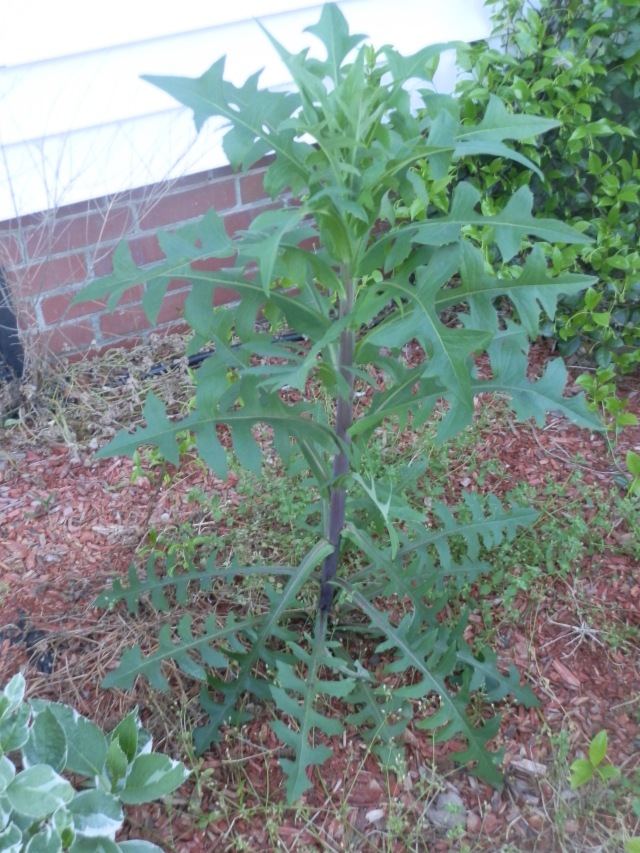 I grew up in Old Town Maine and got a B.S. at the University of Maine in Plant Sciences/ minor in Botany. From there I moved to West Virginia and earned a M.S. in Agronomy at WVU. I also met my wife there. She grew up in rural WV as the daughter of tenant farmers who raised cattle and hogs. Their lifestyle at times was one of subsistence and I learned a lot from them. I've always been a foraging buff, but combining my formal botanical knowledge with their practical 'Foxfire-type' background opened up my eyes a little more. I now teach agriculture to high school students at Northeastern High School in Elizabeth City, NC. My wife teaches with me and we make a great team. I also write a weekly nature/foraging column for the local paper (dailyadvance.com). I also have written several Christian nature/adventure novels that I plan to publish eventually. One is a five book family saga I call the 'Forgotten Virtues' series. In the first book, Never Alone, a young boy comes of age after his father dies in a plane crash, and he has to make it alone. Never Alone is now available in paperback, Kindle and Nook. The second book, Strange Courage, takes Carl from his High School graduation to his recovery from a nasty divorce. The third book, Second Chances, takes Carl from his ex-wife's death and the custody of his son to his heroic death at age 59. The fourth book, Promises Kept, depicts how his grandchildren react and adjust to his death. In the final book, Grandfather's Way, his youngest and most timid granddaughter emerges from the shadow of her overachieving family and accomplishes more in four months than most do in a lifetime. I use many foraging references with a lot of the plants I profile in these articles in those books.
View all posts by tedmanzer →
This entry was posted in foraging and tagged Lactuca serriola, nature, prickly lettuce, salad, tillage. Bookmark the permalink.