Take a walk along the edge of the woods right now and the delightful aroma of honeysuckle will hit you. You might not embrace the sight of those aggressive vines, but the white to yellowish pairs of flowers are striking and loaded with sugary juice. Honeysuckle fragrance is incorporated into perfumes and soaps, but there are many more uses for this unique flower.

Children everywhere have pulled off these delicate blooms and sucked the sweet nectar from them. Mothers need not worry. Those flowers are not poisonous. They make a fine herbal tea and can be used in cooking.

Collect the flowers and briefly boil or steam them. Puree the mixture and add it to your favorite sugar cookie recipe, remembering to reduce the liquid portion of the dough a little. The distinctive but delicate flavor makes a great change of pace.

I’ve seen recipes for frozen honeysuckle sorbet and honeysuckle pudding, but I’ve never tried them. There are several jelly recipes posted on the internet.

This vine will lure butterflies and hummingbirds to your yard. There is one problem though. This Asian introduction is one of the most prolific species anywhere. It is on the invasive species list for nearly every eastern state. There are native honeysuckles, but by far the most common species encountered in eastern North Carolina is the Japanese honeysuckle (Lonicera japonica). Don’t dig it up from the wild and transplant it in your yard. We don’t need to encourage it one bit. The birds spread enough seed around already.

This species is best left to the fringe places where forests and open areas meet. It provides cover and food to wildlife, though it also out-competes most of our native plants.

Vines can grow to the treetops and totally mask shrubbery. They climb on anything that will support them. Japanese honeysuckle is a perennial woody vine that spreads by seeds, underground rhizomes, and above ground runners. It has oval leaves that emerge from the stem in pairs. They are about three inches long and semi-evergreen to evergreen. Older stems have brownish bark that peels in long strips. Berry-like fruits are black when mature.

Avoid the seeds as there is mixed information concerning their toxicity. Some sources list them as quite poisonous. Foliage is questionable as well, though it is used in Asia extensively for medicinal purposes. Japanese honeysuckle has anti-inflammatory and diuretic properties.

Most homeowners would like to rid their properties of these pesky vines. Plants were introduced in the early 1800’s and they have all but assumed their victory over us. I’ve had the most success controlling honeysuckle by cutting it to the ground and spot-treating the freshly cut stumps with concentrated Round-up.

Use the kind that is at least 41 percent glyphosate. Two problems with this method are that you must be careful not to use too much chemical and you can’t hit any non-target plants. I shy away from foliar applications since it’s too easy to contact landscape flowers and shrubbery. The increased volume of spray makes it almost impossible to avoid desired plants. 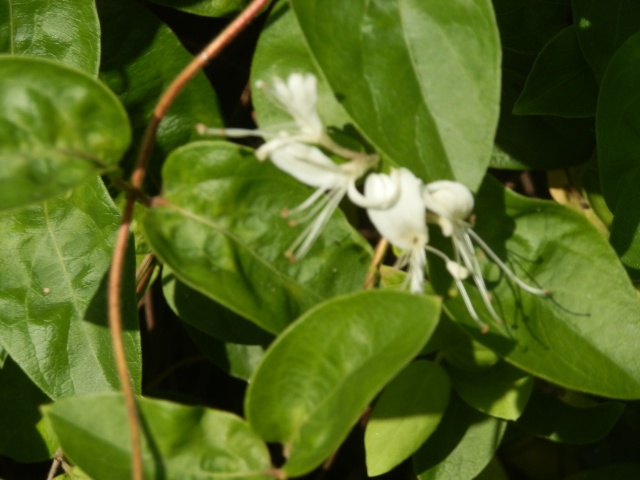 I grew up in Old Town Maine and got a B.S. at the University of Maine in Plant Sciences/ minor in Botany. From there I moved to West Virginia and earned a M.S. in Agronomy at WVU. I also met my wife there. She grew up in rural WV as the daughter of tenant farmers who raised cattle and hogs. Their lifestyle at times was one of subsistence and I learned a lot from them. I've always been a foraging buff, but combining my formal botanical knowledge with their practical 'Foxfire-type' background opened up my eyes a little more. I now teach agriculture to high school students at Northeastern High School in Elizabeth City, NC. My wife teaches with me and we make a great team. I also write a weekly nature/foraging column for the local paper (dailyadvance.com). I also have written several Christian nature/adventure novels that I plan to publish eventually. One is a five book family saga I call the 'Forgotten Virtues' series. In the first book, Never Alone, a young boy comes of age after his father dies in a plane crash, and he has to make it alone. Never Alone is now available in paperback, Kindle and Nook. The second book, Strange Courage, takes Carl from his High School graduation to his recovery from a nasty divorce. The third book, Second Chances, takes Carl from his ex-wife's death and the custody of his son to his heroic death at age 59. The fourth book, Promises Kept, depicts how his grandchildren react and adjust to his death. In the final book, Grandfather's Way, his youngest and most timid granddaughter emerges from the shadow of her overachieving family and accomplishes more in four months than most do in a lifetime. I use many foraging references with a lot of the plants I profile in these articles in those books.
View all posts by tedmanzer →
This entry was posted in foraging and tagged chemical control, invasive vine, Japanese honeysuckle, Lonicera japonica, nectar. Bookmark the permalink.