In late spring local strawberries are on the shelves of area grocery stores. Mine usually produce pretty well too. For small fruit lovers this is a great time of the year.

Strawberries aren’t really berries though. Berries have their seeds on the inside. These tasty red fruits are actually a multiple of achenes. The achene is the seed part recessed into the red receptacle.

Wild strawberries grow best in well drained soils. They also produce much better in full sun, although they may be found in shady places. They also tolerate drought well, unlike their domestic cousins.

. Birds and other animals also disseminate large quantities of seed. Anybody who has ever eaten wild strawberries can vouch for their incredible flavor. Those who have picked any quantity of them know how much work is involved in accumulating any volume.

Wild strawberries are much smaller than the domestic types, particularly some of the newer cultivars that can be almost as large as tennis balls. Often wild fruits are smaller than our fingernails. The concentration of flavor and sweetness in wild strawberries cannot be duplicated though.

These tasty morsels are rare in our coastal plain region. This is a shame. I can remember spending entire mornings picking quarts of them when I was growing up in Maine. Wild strawberry pie or shortcake was a treat I’ll always cherish.

Sometimes we’d stumble onto some strawberries that looked a little different. They were bright red, but their seeds weren’t recessed into the fruit. Flowers were also yellow and not white. They also had no taste. These were Indian strawberries, and they are quite common here. Some call them snake berries.

Many people think they are poisonous but they’re not. Some publications even list them that way, but there are no harmful compounds in them. In fact, they contain significant amounts of Vitamin C. Their problem is simply that they have virtually no flavor whatsoever. I have eaten gobs of them over my lifetime and have never had as much as a single ill symptom. Still, I don’t recommend eating any because they won’t satisfy your taste buds.

Another strawberry species that looks a little like the Indian strawberry does have good flavor. This white flowered one is called the woodland strawberry. It is found in western North Carolina and much of the country.

This little fruit has a simple genetic structure compared to domestic types. Because of this, researchers are working with it to develop new strawberry varieties with better flavor. Tastier shortcakes could be on the way soon. 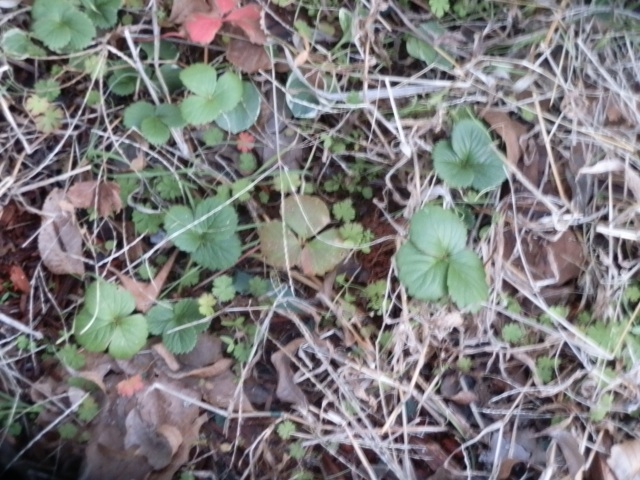 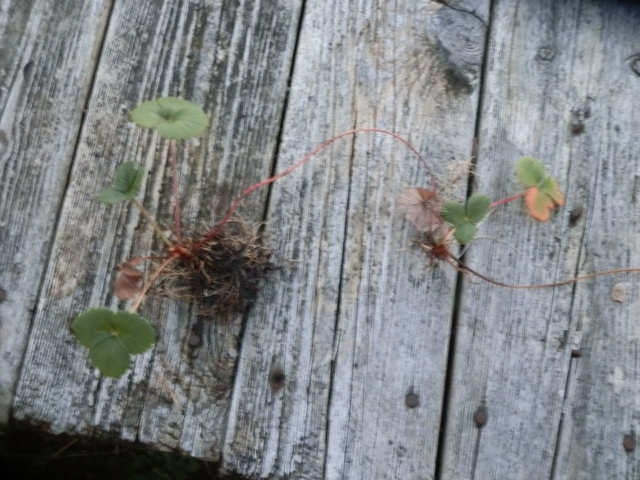 Wild strawberries dug up and ready for transplanting

I grew up in Old Town Maine and got a B.S. at the University of Maine in Plant Sciences/ minor in Botany. From there I moved to West Virginia and earned a M.S. in Agronomy at WVU. I also met my wife there. She grew up in rural WV as the daughter of tenant farmers who raised cattle and hogs. Their lifestyle at times was one of subsistence and I learned a lot from them. I've always been a foraging buff, but combining my formal botanical knowledge with their practical 'Foxfire-type' background opened up my eyes a little more. I now teach agriculture to high school students at Northeastern High School in Elizabeth City, NC. My wife teaches with me and we make a great team. I also write a weekly nature/foraging column for the local paper (dailyadvance.com). I also have written several Christian nature/adventure novels that I plan to publish eventually. One is a five book family saga I call the 'Forgotten Virtues' series. In the first book, Never Alone, a young boy comes of age after his father dies in a plane crash, and he has to make it alone. Never Alone is now available in paperback, Kindle and Nook. The second book, Strange Courage, takes Carl from his High School graduation to his recovery from a nasty divorce. The third book, Second Chances, takes Carl from his ex-wife's death and the custody of his son to his heroic death at age 59. The fourth book, Promises Kept, depicts how his grandchildren react and adjust to his death. In the final book, Grandfather's Way, his youngest and most timid granddaughter emerges from the shadow of her overachieving family and accomplishes more in four months than most do in a lifetime. I use many foraging references with a lot of the plants I profile in these articles in those books.
View all posts by tedmanzer →
This entry was posted in foraging and tagged achenes, incredible flavor, pseudocarp, rose-like flowers, stolons, Virginia strawberry. Bookmark the permalink.