That gold stuff is not Silly String – It’s Dodder

I once overheard somebody complain that some kids killed her tomatoes with silly string. It was none of my business so I didn’t butt in, but I knew that wasn’t the problem. Driving toward the beach recently I spotted several dense patches of the culprit that destroyed her tomatoes and it wasn’t any prank from a spray can.
Dodder (Cuscuta sp.)is a parasitic plant like mistletoe. It attaches itself to its host by modified roots called haustoria. Once connected, dodder extracts whatever nutrients it needs from its victim. Unlike mistletoe, dodder plants contain no chlorophyll and have nothing but tiny scales for leaves. Dodder must sponge nutrients and all its energy from host plants.
Most dodder is bright yellow to orange and can form dense patches. Not every plant is susceptible, however. Grasses including corn are immune as are most cool-season plants and vegetables. Dodder is rarely seen before soil temperatures are warm.
Tomatoes, potatoes, peppers, eggplant, melons, beets and carrots are prime targets. English ivy, mums, impatiens and petunias are vulnerable ornamentals. I’ve seen it on azalea too. In waste places I see it mostly on lambsquarter and redroot pigweed.
Sometimes dodder has been called vampire weed for the way it sucks the energy from its host. According to legend, garlic will repel vampires, but dodder is a tougher adversary. Garlic and onions are very dodder susceptible.
Dodder plants are usually hard to find when they haven’t attached to another plant. They spread by seed and seedlings can only live briefly without a host plant. That doesn’t sound very imposing. However, those seeds can remain dormant but viable for 50 years. Individual plants also can produce several thousand seeds.
I must admit that I have always been somewhat fascinated by it. Flowers are small, white and often barely noticeable. They look a little like tiny lily of the valley flowers. Fruits look like peas without the pods. When dodder grows it constantly reattaches itself to the host plant or surrounding ones creating a strangling mass of gold string.
As you might suspect, dodder can be difficult to control. It’s a good thing this unusual plant is not super common. Young crop seedlings are least able to overcome the parasite. Weakened plants are also more prone to diseases and insect damage. Furthermore, most chemicals that might kill dodder would also kill host plants.
Generally speaking, the best way to control dodder chemically is through the use of pre-emergent herbicides. They keep dodder seeds from germinating. They also keep crop seeds from germinating, but if crops are already growing that technique could work.
On small areas, continued hand removal helps, but debris should be destroyed. Catching it early before flowering is critical. Finding nearby infested areas and attacking it there can also be helpful.
I have never tried it, but unless dodder is parasitizing poisonous plants it’s edible. I suppose it could be boiled and used as a pasta substitute. I’m not interested. Numerous sources report its use medicinally to treat various internal ailments, but dodder is not a major player in herbal medicine.

A healthy stand of dodder along a ditch 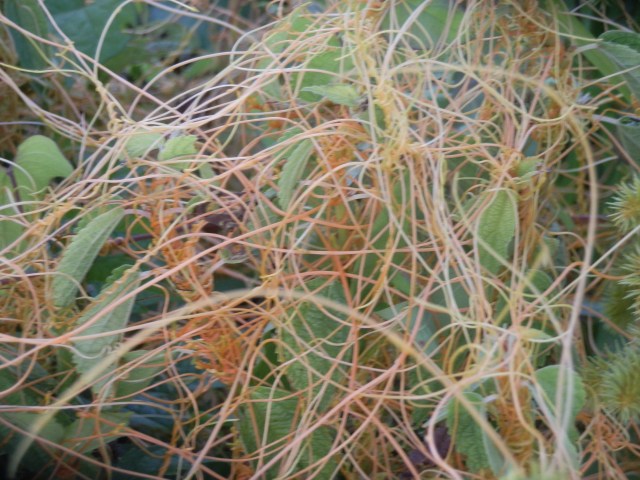 A closer view – the color is quite pretty

Another close-up of the strangling little devil

Which is worse, the dodder or the alligator weed it’s attacking?

I grew up in Old Town Maine and got a B.S. at the University of Maine in Plant Sciences/ minor in Botany. From there I moved to West Virginia and earned a M.S. in Agronomy at WVU. I also met my wife there. She grew up in rural WV as the daughter of tenant farmers who raised cattle and hogs. Their lifestyle at times was one of subsistence and I learned a lot from them. I've always been a foraging buff, but combining my formal botanical knowledge with their practical 'Foxfire-type' background opened up my eyes a little more. I now teach agriculture to high school students at Northeastern High School in Elizabeth City, NC. My wife teaches with me and we make a great team. I also write a weekly nature/foraging column for the local paper (dailyadvance.com). I also have written several Christian nature/adventure novels that I plan to publish eventually. One is a five book family saga I call the 'Forgotten Virtues' series. In the first book, Never Alone, a young boy comes of age after his father dies in a plane crash, and he has to make it alone. Never Alone is now available in paperback, Kindle and Nook. The second book, Strange Courage, takes Carl from his High School graduation to his recovery from a nasty divorce. The third book, Second Chances, takes Carl from his ex-wife's death and the custody of his son to his heroic death at age 59. The fourth book, Promises Kept, depicts how his grandchildren react and adjust to his death. In the final book, Grandfather's Way, his youngest and most timid granddaughter emerges from the shadow of her overachieving family and accomplishes more in four months than most do in a lifetime. I use many foraging references with a lot of the plants I profile in these articles in those books.
View all posts by tedmanzer →
This entry was posted in foraging and tagged bright yellow to orange, Cuscuta, dodder, dormant seeds, edible, hand removal, haustoria, herbal medicine, host plants, parasitic plant, pre-emergent herbicides, silly string, small white flowers. Bookmark the permalink.