River birch is another deciduous species with winter appeal

Last week I profiled winterberry holly and its landscape design value. A few other shrubs have special appeal in winter, but river birch (Betula nigra) is a tree that also fits the bill.  Its light papery bark develops a pleasing contrast to the other trees and shrubs in the yard.

River birch bark is not as striking from a color standpoint as the white birches that grow up north, but the salmon colored flakiness makes up for it. Pigmentation is somewhat muted as trees age, but larger specimens are eye-catching in and of themselves. Male flowers develop in fall and these worm-like catkins persist on the branches all winter.

Female flowers emerge in spring. They look like little cones. As they develop, the male 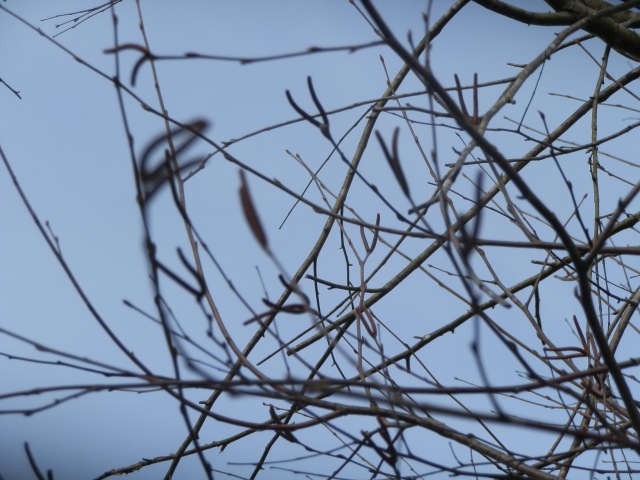 flowers begin to shed pollen and by fall a healthy population of seeds spreads throughout the landscape. Summer foliage is diamond-shaped and doubly serrated. This means leaf edges have big teeth with smaller ones in between them.

River birch eventually becomes a medium sized tree. I’ve seen some specimens 80 feet tall with a trunk diameter of about three feet, but that’s rare. Typical height is 40-50 feet with a canopy spread of nearly that on a sunny location.

A big advantage of this species over many other shade trees adapted to our area is that they grow in a wide variety of soil moisture and pH ranges. They thrive in wet places better than most landscape trees and once they become established they tolerate drought fairly well.

Iron chlorosis causes leaves to develop green and yellow striping. This deficiency symptom is common on soils with pH values nearing neutral. Iron chlorosis slows growth slightly and is easily controlled by applying iron to the soil or foliage.

River birch is resistant to bronze birch borer and Verticillium vascular wilt. Trees are quite susceptible to spiny hazelnut aphids though. These critters reside on leaf undersides and are readily detected as leaves develop ridges. Infestations usually take place early in the year and generally don’t affect the overall health of the tree.

River birches even have a fringe benefit. As spring approaches they develop sap much like maple trees do. This sap can be consumed directly and it is totally safe to drink without any treatment. Sap can also be boiled down into syrup. The flavor is a little different than maple or sweet birch syrup, but is quite rich and pleasing with a hint of wintergreen.

My only experience making birch syrup was mixed. Sugar content is not as high as sugar maple and the sap is more complex. Many other compounds are present besides sucrose. That gives it the rich taste. However, making the syrup requires more care. It burns more readily, so the heat must be lowered as the syrup nears its readiness.

Several herbal sources tout river birch as a medicinal plant. I have never used it for that purpose, but I’ve also never encountered any side-effects from consuming sap, syrup, or tea made from leaves or inner bark.

I grew up in Old Town Maine and got a B.S. at the University of Maine in Plant Sciences/ minor in Botany. From there I moved to West Virginia and earned a M.S. in Agronomy at WVU. I also met my wife there. She grew up in rural WV as the daughter of tenant farmers who raised cattle and hogs. Their lifestyle at times was one of subsistence and I learned a lot from them. I've always been a foraging buff, but combining my formal botanical knowledge with their practical 'Foxfire-type' background opened up my eyes a little more. I recently retired from teaching high school agriculture after 25 years teaching with my wife. Until recently I wrote a weekly nature/foraging column for the local paper (dailyadvance.com). I also have written several Christian nature/adventure novels that can be purchased on Amazon in Kindle format. One is a five book family saga I call the 'Forgotten Virtues' series. In the first book, Never Alone (presently out of print), a young boy comes of age after his father dies in a plane crash, and he has to make it alone. The second book, Strange Courage, takes Carl from his High School graduation to his recovery from a nasty divorce. The third book, Second Chances, takes Carl from his ex-wife's death and the custody of his son to his heroic death at age 59. The fourth book, Promises Kept, depicts how his grandchildren react and adjust to his death (this one is not yet published). In the final book, Grandfather's Way, his youngest and most timid granddaughter emerges from the shadow of her overachieving family and accomplishes more in four months than most do in a lifetime. I use many foraging references with a lot of the plants I profile in these articles in those books. I also wrote a romance novel titled Virginia. It is available on Amazon and is a different type of romance from a man's perspective.
View all posts by tedmanzer →
This entry was posted in Uncategorized and tagged aphids, Betula nigra, doubly serrated, eye-catching, iron chlorosis, River birch, salmon colored flakiness, spiny hazelnut aphid, syrup, thrive in wet places, worm-like catkins. Bookmark the permalink.