Even mean old roosters have a good use.

I know what you’re thinking. They can go in the stew pot. That’s true, but most of those bony old devils don’t even make good fricassee.  They’re great on a fishhook though.

When I was a teenager I was a serious fly-tyer. My grandfather got me started when I was seven and by the time I was in my mid-teens I was pretty good. I even kept a local sporting goods store stocked with a few of my favorite patterns for a while.

I always had my eye out for pretty roosters. I remember one time I was with my grandfather at his fishing buddy’s house. This guy had a mean old bright colored mixed breed rooster, and he was complaining about him. Normy asked me if I wanted him, and I told him that I very much would like the fowl.

Normy laughed at me but my grandfather didn’t. He knew exactly what my intensions were. I wanted those gorgeous neck and saddle hackles. I figured the best use for the meat for crabbing or maybe to catch a coon or two.

There’s a big difference between rooster and hen feathers. Hen hackle feathers have a degree of webbing to them and they are rounder and not as long. They’re fine for some wet fly patterns but are totally unacceptable for dry flies or tandem streamers.

Fly tying supplies are expensive. I was a cheapskate and scrounged for all the bargains I could find. A few years later I worked for a college professor who had a woodworking shop on the side. He also got his hands on about twenty big meat chickens. I helped feed them as well as work in the shop. They were major feed burners and grew like weeds.

One evening a fox or a dog slipped through a hole in the coop and killed every one. I carried them two by two to a big hole I dug next to his garden and buried them. However, before I interned their carcasses I skinned out several satisfactory white rooster necks and backs. That evening I toted home a sack full of white feathers.

My mother helped me dye them different colors. We mixed dyes together to achieve the proper hues and I tied flies with these feathers for several years. They weren’t of the same quality of a good old bright colored rooster, but they caught fish.

Since my youth, those hackles are the first thing I notice when I see a rooster. I don’t have time to tie flies like I once did, but I always see value in an old rooster. When they decide to spur me I just admire their feathers a little more. I need to get back into fly tying. 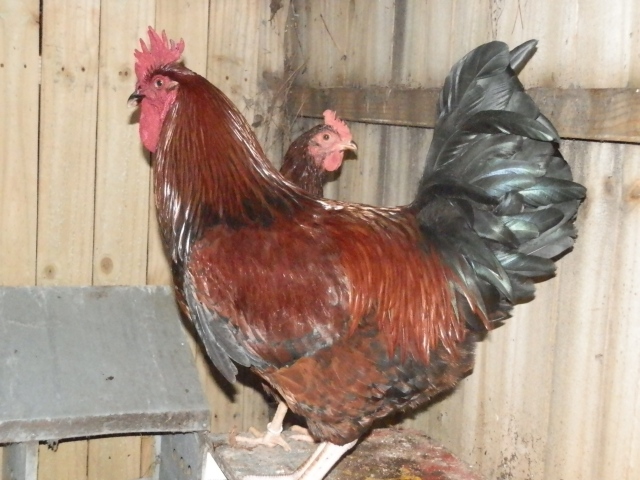 He’s young but he has potential

I grew up in Old Town Maine and got a B.S. at the University of Maine in Plant Sciences/ minor in Botany. From there I moved to West Virginia and earned a M.S. in Agronomy at WVU. I also met my wife there. She grew up in rural WV as the daughter of tenant farmers who raised cattle and hogs. Their lifestyle at times was one of subsistence and I learned a lot from them. I've always been a foraging buff, but combining my formal botanical knowledge with their practical 'Foxfire-type' background opened up my eyes a little more. I now teach agriculture to high school students at Northeastern High School in Elizabeth City, NC. My wife teaches with me and we make a great team. I also write a weekly nature/foraging column for the local paper (dailyadvance.com). I also have written several Christian nature/adventure novels that I plan to publish eventually. One is a five book family saga I call the 'Forgotten Virtues' series. In the first book, Never Alone, a young boy comes of age after his father dies in a plane crash, and he has to make it alone. Never Alone is now available in paperback, Kindle and Nook. The second book, Strange Courage, takes Carl from his High School graduation to his recovery from a nasty divorce. The third book, Second Chances, takes Carl from his ex-wife's death and the custody of his son to his heroic death at age 59. The fourth book, Promises Kept, depicts how his grandchildren react and adjust to his death. In the final book, Grandfather's Way, his youngest and most timid granddaughter emerges from the shadow of her overachieving family and accomplishes more in four months than most do in a lifetime. I use many foraging references with a lot of the plants I profile in these articles in those books.
View all posts by tedmanzer →
This entry was posted in foraging and tagged dry flies, fly tying, landlocked salmon, neck hackles, old roosters, Queen Bee, saddle hackles, streamer flies, tandem streamers, wet flies. Bookmark the permalink.