Confessions of a potato snob

My father was a plant pathologist specializing with potatoes. He was a private pilot and one of the pioneers at using aerial infrared photography to detect late blight in potatoes. Some cultivars were more susceptible than others.

Since potatoes paid the bills at our house, we ate a lot of them. As a result, I could not help becoming somewhat of a connoisseur. All potatoes are not the same and I learned that at an early age.

I just assumed everyone knew that. There were certain varieties, such as ‘Red Pontiac’ and ‘Katahdin’ that were great for boiling and making potato salad. They weren’t worth a thing for baking, at least in my eyes. I like a dry mealy baked potato that soaks up the butter and sour cream. I don’t like foil on them either. Crunchy skins are my favorite.

On the other hand, other cultivars like ‘Belrus’ and ‘Russet Burbank’ made the fluffiest baked potatoes imaginable. They were totally unacceptable for potato salad. When boiled, they turned to mush. A few were fine in soup because they thickened it. ‘Kennebec’ was fairly versatile and could be used for either. ‘Atlantic’ chips well, but storage is problematic.

To a large extent specific gravity levels are genetic. That’s why specific varieties are grown. However, certain growing and management conditions can raise or lower starch to water content. Farmers who grow and sell to chip processers are acutely aware of this.

When I moved to West Virginia for graduate school I reunited with an old friend and colleague of my dad’s. The late Dr. Bob Young was also a potato man and he furnished me with experimental potato clones to test. I enjoyed that and it helped with my grocery bill.

Some types didn’t convert sugars completely to starches. That ruined their frying quality as they caramelized too much. Unfortunately, some of my favorites never made it past the experimental number stage.

When developing new cultivars, often cooking qualities take a back seat to yield, skin quality and disease resistance. I guess the general public isn’t as discriminating as this potato snob. Most people blame the cook if the product is subpar. I sit in the restaurant and ask myself why they chose to bake a variety not bred for that purpose.

I still remember questioning my then girlfriend as to why she chose to bake Pontiacs when she fixed supper. She said they were unblemished and pretty. I told her they’d be soggy. They were, but she married me anyway. Life is good. 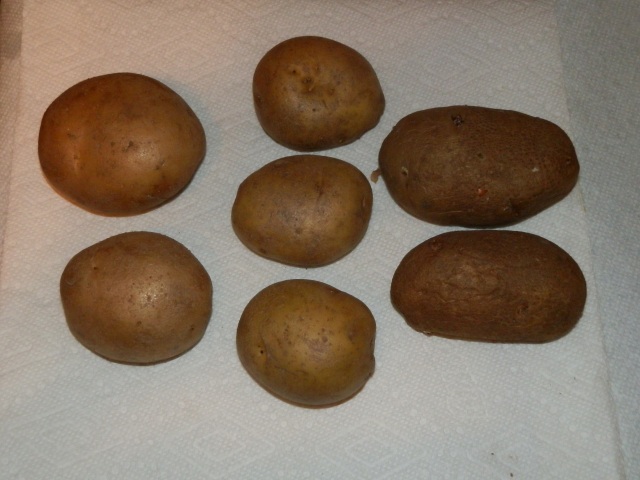 Visually, sometimes it’s hard to tell – to the left are boilers. Bakers are center and right.

I grew up in Old Town Maine and got a B.S. at the University of Maine in Plant Sciences/ minor in Botany. From there I moved to West Virginia and earned a M.S. in Agronomy at WVU. I also met my wife there. She grew up in rural WV as the daughter of tenant farmers who raised cattle and hogs. Their lifestyle at times was one of subsistence and I learned a lot from them. I've always been a foraging buff, but combining my formal botanical knowledge with their practical 'Foxfire-type' background opened up my eyes a little more. I now teach agriculture to high school students at Northeastern High School in Elizabeth City, NC. My wife teaches with me and we make a great team. I also write a weekly nature/foraging column for the local paper (dailyadvance.com). I also have written several Christian nature/adventure novels that I plan to publish eventually. One is a five book family saga I call the 'Forgotten Virtues' series. In the first book, Never Alone, a young boy comes of age after his father dies in a plane crash, and he has to make it alone. Never Alone is now available in paperback, Kindle and Nook. The second book, Strange Courage, takes Carl from his High School graduation to his recovery from a nasty divorce. The third book, Second Chances, takes Carl from his ex-wife's death and the custody of his son to his heroic death at age 59. The fourth book, Promises Kept, depicts how his grandchildren react and adjust to his death. In the final book, Grandfather's Way, his youngest and most timid granddaughter emerges from the shadow of her overachieving family and accomplishes more in four months than most do in a lifetime. I use many foraging references with a lot of the plants I profile in these articles in those books.
View all posts by tedmanzer →
This entry was posted in foraging and tagged Atlantic, baking, Belrus, boiling, chipping, convert sugars to starches, cooking qualities, experimental potato clones, Katahdin, Kennebec, potatoes, red Pontiac, Russet Burbank, specific gravity. Bookmark the permalink.