Evergreen bagworms are a major problem in our landscapes

A short time ago I received an email encouraging me to write about bagworms. I haven’t written about them here and they are quite evident now so I’ll gladly address the subject.

There are numerous types of bagworms, but the one of greatest importance to our area is the evergreen bagworm. This is somewhat of a confusion to many. Evergreen bagworms prefer coniferous evergreens like junipers, arborvitae and Leyland cypress, but they also attack broadleaf evergreens and even deciduous trees and shrubs.

These insects are more likely to cause lasting injury or even death to coniferous species though. Bagworm larvae attack branch tips first.  As larvae grow larger, feeding damage becomes more noticeable. Severe infestation can kill host plants, especially evergreen species because their leaves do not sprout and replenish as readily as those of deciduous species.

Despite the name, bagworms are not worms at all. They are moths. The larval stage is wormlike, so that’s where the name originates. The bagworm lives its entire life inside the security of its bag, which it constructs with its own generated silk and interwoven bits of foliage.

When the hatchling larvae emerge from their cocoons, they spin a strand of silk that catches the wind and drift to another place. Then they begin work on their protective cocoon. They weave foliage fragments into the silk they produce. The result is what we call the bags.

These voracious insects are often hard to spot until they have caused substantial damage, especially on conifers. The little camouflaged bags appear at branch tips. These structures look a little like buds or cones until we scrutinize them. Once the bags begin to turn brown and nod downward they are much easier to spot. However, at that point major damage could already have occurred.

Only the adult male moth leaves the security of the bag when it is ready to mate. Adult males are black with roughly clear wings. Length and wingspan are each about an inch long. Neither the male nor the female adult feeds. Females live a week or two while males emerge, find a bag with a female, breed and are dead within two days.

Females produce a pheromone to attract males or this process would be far less efficient. When females are finished laying their eggs they either mummify around them or exit the bag and die. Either way the eggs rest safely in these bags and each bag could contain up to 1000 eggs.

Bagworms do have enemies. Several species of parasitic wasps can help control them. Many birds also like them, but usually they don’t eat sufficient amounts early enough to prevent damage.

Several insecticides are effective at killing bagworms but early treatment is necessary. Biological insecticides, such as those containing the bacteria Bacillus thuringiensis can be effective too, but early treatment is still necessary. Once bags develop major damage has occurred. Inspect plants early in the growing season and hand pick and destroy bags whenever you see them. It’s a challenge. 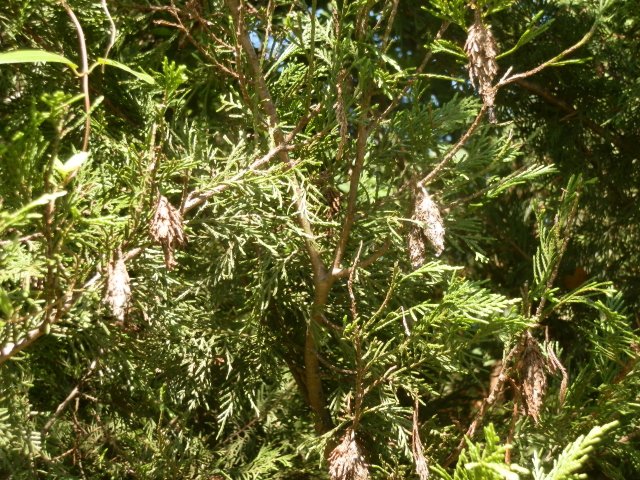 I grew up in Old Town Maine and got a B.S. at the University of Maine in Plant Sciences/ minor in Botany. From there I moved to West Virginia and earned a M.S. in Agronomy at WVU. I also met my wife there. She grew up in rural WV as the daughter of tenant farmers who raised cattle and hogs. Their lifestyle at times was one of subsistence and I learned a lot from them. I've always been a foraging buff, but combining my formal botanical knowledge with their practical 'Foxfire-type' background opened up my eyes a little more. I now teach agriculture to high school students at Northeastern High School in Elizabeth City, NC. My wife teaches with me and we make a great team. I also write a weekly nature/foraging column for the local paper (dailyadvance.com). I also have written several Christian nature/adventure novels that I plan to publish eventually. One is a five book family saga I call the 'Forgotten Virtues' series. In the first book, Never Alone, a young boy comes of age after his father dies in a plane crash, and he has to make it alone. Never Alone is now available in paperback, Kindle and Nook. The second book, Strange Courage, takes Carl from his High School graduation to his recovery from a nasty divorce. The third book, Second Chances, takes Carl from his ex-wife's death and the custody of his son to his heroic death at age 59. The fourth book, Promises Kept, depicts how his grandchildren react and adjust to his death. In the final book, Grandfather's Way, his youngest and most timid granddaughter emerges from the shadow of her overachieving family and accomplishes more in four months than most do in a lifetime. I use many foraging references with a lot of the plants I profile in these articles in those books.
View all posts by tedmanzer →
This entry was posted in Uncategorized and tagged arborvitae, biological insecticides, camouflaged bags, cedars, evergreen bagworm, junipers, larvae, Leyland Cypress, moths, parasitic wasps, severe infestation. Bookmark the permalink.