Last week I wrote about scouring rush which isn’t really a rush at all. Common rush (Juncus effusus) is a native plant that graces our ditches and pond edges. Ornamental versions have also found their way into our perennial gardens and flower pots.

Sometimes called soft rush, this plant is characterized by its medium green round spear-like leafless stems. These rushes actually have leaves, but they are reduced to sheaths along the stem bases. From a distance, these plants strongly resemble chives.

In the wild common rush is most visible in wet places. Plants can live semi-submerged for long periods. However, they thrive in dry sites as well, and plants are very tolerant of acid soil. They aren’t heavy fertilizer users either.

Livestock and most wildlife usually leave rushes alone, although muskrats will eat young growing stems. They also dig out the roots and eat them. Many songbirds enjoy the abundant seeds.

Rushes spread by underground stems and they usually form dense clumps. These underground stems, or rhizomes, help make this species a great conservation plant as they trap soil sediments before they can enter the water. Removing potential pollutants from our waterways is a valuable commodity in a plant.

In recent years different ecotypes of common rush have been selected for their spiraling growth habit. Wild types don’t often display it, but selections have been bred for this unique twisting. All of a sudden they have become popular for ornamental use.

These ornamental soft rushes are hardy as far north as Zone five. Some cultivars rarely get taller than eight inches, while others can be as tall as three feet. Their most promising use is with water gardens but they add contrast and curiosity to drier places. They even grow well in pots. Best of all, they have few insect or disease enemies.

Once established, plants require practically no maintenance. The only complaint I’ve heard is that on some sites they can become invasive. High seed yields are likely responsible for this.

Invasiveness need not be a problem. These twisted stems are great in floral arrangements, both fresh and dried. Native Americans used the wild version of this plant to make high quality baskets. Common rush has also been used to make rope and paper.

As you might suspect, this species has also been used medicinally. This plant contains compounds that are fairly strong diuretics so they aid in ridding the body of excess water. Preparations from stem pith have been used to treat sore throats, jaundice, and urinary tract infections.

Since I’m not an herbalist this is one plant I won’t be ingesting. Many sources list it as possibly toxic. A bigger problem is that as of yet I haven’t been able to determine specific responsible chemicals. There are so many proven safe herbs out there that I’m not interested in trying a mystery. 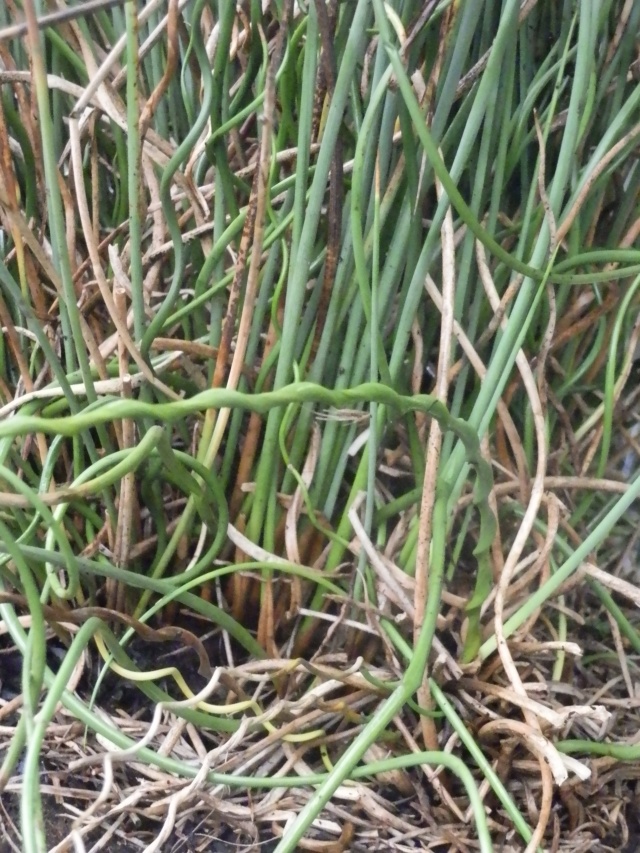 I grew up in Old Town Maine and got a B.S. at the University of Maine in Plant Sciences/ minor in Botany. From there I moved to West Virginia and earned a M.S. in Agronomy at WVU. I also met my wife there. She grew up in rural WV as the daughter of tenant farmers who raised cattle and hogs. Their lifestyle at times was one of subsistence and I learned a lot from them. I've always been a foraging buff, but combining my formal botanical knowledge with their practical 'Foxfire-type' background opened up my eyes a little more. I recently retired from teaching high school agriculture after 25 years teaching with my wife. Until recently I wrote a weekly nature/foraging column for the local paper (dailyadvance.com). I also have written several Christian nature/adventure novels that can be purchased on Amazon in Kindle format. One is a five book family saga I call the 'Forgotten Virtues' series. In the first book, Never Alone (presently out of print), a young boy comes of age after his father dies in a plane crash, and he has to make it alone. The second book, Strange Courage, takes Carl from his High School graduation to his recovery from a nasty divorce. The third book, Second Chances, takes Carl from his ex-wife's death and the custody of his son to his heroic death at age 59. The fourth book, Promises Kept, depicts how his grandchildren react and adjust to his death (this one is not yet published). In the final book, Grandfather's Way, his youngest and most timid granddaughter emerges from the shadow of her overachieving family and accomplishes more in four months than most do in a lifetime. I use many foraging references with a lot of the plants I profile in these articles in those books. I also wrote a romance novel titled Virginia. It is available on Amazon and is a different type of romance from a man's perspective.
View all posts by tedmanzer →
This entry was posted in foraging and tagged common rush, ditches, few insect or disease enemies, high quality baskets, Juncus effusus, large seed crops, no maintenance, pond edges, resemble chives, soft rush, water gardens. Bookmark the permalink.

2 Responses to Common rush is a useful native wetland plant