Blueberries come in many types

In Maine, when one mentions blueberries tiny lowbush ones are the subject. These plants usually grow shorter than 12 inches. They occur naturally and are harvested by raking and winnowing the fruit.

Farmers employ weed, insect and disease control measures. They also mechanically prune or burn the fields, but they don’t tear up and replant. Lowbush are the hardiest blueberries.

All other blueberry types are much taller. Some require two different varieties for cross pollination. Common types are northern highbush, half highs, southern highbush and rabbiteye blueberries. All blueberries belong to the genus Vaccinium.

As one might expect half high types were crosses of lowbush and highbush types. They stand about four feet tall and are also very hardy. Snow usually protects most of the plant in a typical northern winter. This type isn’t adaptable to our hot summers.

Northern highbush types were collected from the wild and bred for fruit quality and fruiting season. While mainly considered northern blueberries, some common cultivars adapted to this area are: Blue Jay, Blue Ray, Patriot, Chandler and Darrow. Their advantage is that they don’t require cross-pollination. As one would expect from the name, a disadvantage is that our summers are sometimes a bit hot for optimal production. Plants might be stressed.

Southern highbush blueberries might be a better choice. They are generally self-fertile but almost always benefit from cross-pollination. Plant at least two different varieties. Another thing to consider is that the blueberry cultivars flower at the same time. Many don’t. O’Neal, Blue Ridge, New Hanover, Croatan and Bounty are cultivars adapted to coastal North Carolina.

Rabbiteye blueberries also will grow well here. They are nearly self-sterile, meaning cross-pollination is necessary. These are primarily grown in the Piedmont region as they are well adapted to upland clay soils.

Rabbiteye types tolerate hot weather better than any other blueberry. Thay also are the least winter hardy. Usually this isn’t a problem for our area, but this past winter might have generated a little winter kill on some rabbiteye blueberries here.

All blueberries require soils with acid pH and high organic matter. Soil pH 4.5 to 5 is best. Plants require moist soils, but poorly drained ones should be raised, amended in some way or avoided. Blueberries are not heavy fertilizer users, so more is not better. Also, for best results, any nitrogen should be in the ammonium not the nitrate form

It’s difficult for some folks to remove fruit, but for best long-term results flowers and fruit should be removed in the establishment year. If plants become well established, they should begin to fruit heavily by their third year.

Plants should be pruned in the dormant season. Remove old and weak canes and generally shape the plants. Don’t be afraid to remove some fruit buds as fewer flowers generally means larger fruit. Another thing to consider is to always encourage pollinators. 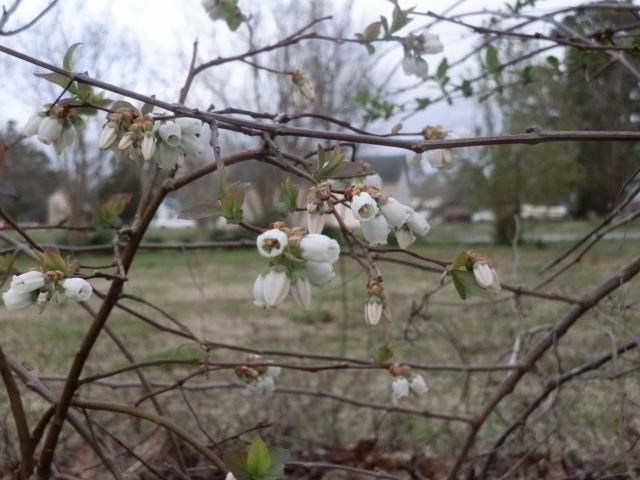 I grew up in Old Town Maine and got a B.S. at the University of Maine in Plant Sciences/ minor in Botany. From there I moved to West Virginia and earned a M.S. in Agronomy at WVU. I also met my wife there. She grew up in rural WV as the daughter of tenant farmers who raised cattle and hogs. Their lifestyle at times was one of subsistence and I learned a lot from them. I've always been a foraging buff, but combining my formal botanical knowledge with their practical 'Foxfire-type' background opened up my eyes a little more. I now teach agriculture to high school students at Northeastern High School in Elizabeth City, NC. My wife teaches with me and we make a great team. I also write a weekly nature/foraging column for the local paper (dailyadvance.com). I also have written several Christian nature/adventure novels that I plan to publish eventually. One is a five book family saga I call the 'Forgotten Virtues' series. In the first book, Never Alone, a young boy comes of age after his father dies in a plane crash, and he has to make it alone. Never Alone is now available in paperback, Kindle and Nook. The second book, Strange Courage, takes Carl from his High School graduation to his recovery from a nasty divorce. The third book, Second Chances, takes Carl from his ex-wife's death and the custody of his son to his heroic death at age 59. The fourth book, Promises Kept, depicts how his grandchildren react and adjust to his death. In the final book, Grandfather's Way, his youngest and most timid granddaughter emerges from the shadow of her overachieving family and accomplishes more in four months than most do in a lifetime. I use many foraging references with a lot of the plants I profile in these articles in those books.
View all posts by tedmanzer →
This entry was posted in foraging and tagged acid soil, blueberry, half-high blueberry, lowbush blueberry, moist soil, northern Highbush blueberry, rabbiteye blueberry, self-sterile, southern highbush blueberry, Vaccinium. Bookmark the permalink.

3 Responses to Blueberries come in many types