Last week I profiled trumpet vine, a ridiculously aggressive woody vine. This week belongs to another nemesis, and it’s also marketed as an ornamental.

Virginia creeper (Parthenocissus quinquefolia) is that vine many people confuse with poison ivy. It has leaves with five leaflets instead of three. Berries are purple instead of white. It also doesn’t have the same hairiness on the stems. This material is root tissue that clings to things. Correctly they are referred to as adventitious aerial roots.

Unlike poison ivy, Virginia creeper doesn’t contain urushiol, which causes the running sores resulting from poison ivy exposure. Some folks to experience a minor and short-term irritation from it. In addition, it is far more aggressive than poison ivy and covers landscaping and buildings in a fraction of the time.

Virginia creeper doesn’t climb exclusively by adventitious roots. It has tendrils like grape vines do. One would expect this, as it is in the grape family. These woody vines can grow to the tops of most trees and up and down utility poles.

Virginia creeper produces fruits that look like miniature grapes. However, they are poisonous in large quantities. These berries don’t taste very good, so children likely won’t eat enough to cause serious problems. Birds and squirrels will eat these fruits though and spread the seeds everywhere. Pretty soon, you will find seedlings all over your yard.

Sometimes pets will eat these vines and results are variable. Plants contain oxalate compounds which can lead to kidney problems or mouth irritations. Usually large quantities must be eaten.

For those who want native landscaping, this one fits the bill. However, its aggressiveness will frustrate you. It thrives in sun or shade. Technically, it’s not considered invasive, since it’s native. That’s just semantics. This is not a plant to encourage. You won’t be able to contain it.

I admit it has beautiful red foliage in the fall, but so does poison ivy. I can tolerate wisteria. It has beautiful fragrant flowers, and it doesn’t spread as fast from seeds.

Round-up is effective for killing Virginia creeper. Unfortunately, it kills whatever it hits, so you must pull the vines off the plants first. Round-up also kills grass, so laying vines on your lawn to be sprayed isn’t the answer either. Cutting the vines down and treating freshly cut stumps with concentrated Round-up is the best solution.

Vines encroaching onto the lawn can be controlled by broadleaf herbicides like 2,4-D, dicamba, or mecaprop. A combination of the three works well too. These chemicals are effective for lawn use only. They will kill most flowers, shrubs and trees.

The important thing to remember is to not let this plant get ahead of you. It’s a fast grower and can destroy landscaping quickly. It also will ruin siding.

Also, don’t assume you’ve solved the problem after your initial treatment. Several applications are usually necessary to get it all. Seeds can also remain dormant and new plants can pop up at any time. Don’t get talked into planting this one. The longer you have it the more you will hate it. 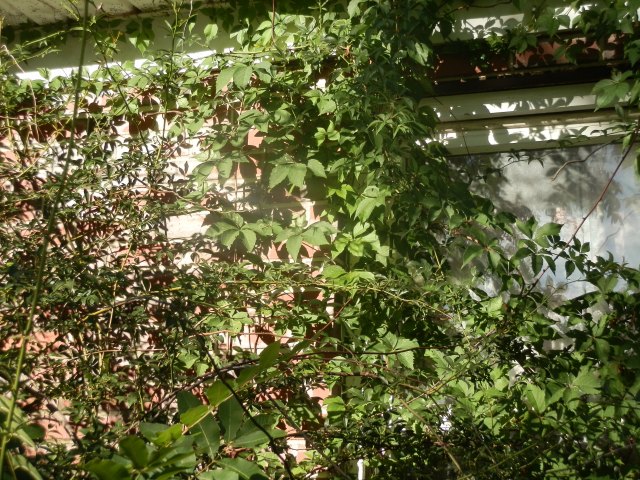 Virginia creeper is taking over my Lady Banks Rose 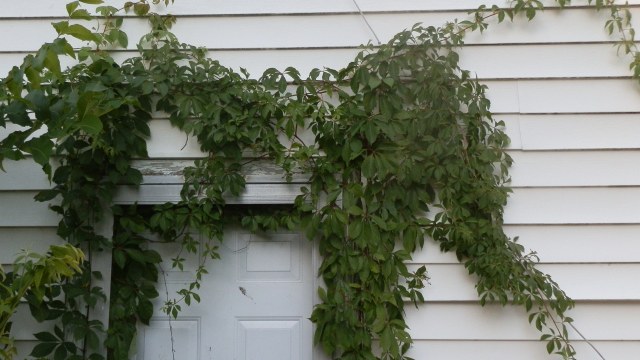 Virginia creeper is taking over this doorway

I grew up in Old Town Maine and got a B.S. at the University of Maine in Plant Sciences/ minor in Botany. From there I moved to West Virginia and earned a M.S. in Agronomy at WVU. I also met my wife there. She grew up in rural WV as the daughter of tenant farmers who raised cattle and hogs. Their lifestyle at times was one of subsistence and I learned a lot from them. I've always been a foraging buff, but combining my formal botanical knowledge with their practical 'Foxfire-type' background opened up my eyes a little more. I now teach agriculture to high school students at Northeastern High School in Elizabeth City, NC. My wife teaches with me and we make a great team. I also write a weekly nature/foraging column for the local paper (dailyadvance.com). I also have written several Christian nature/adventure novels that I plan to publish eventually. One is a five book family saga I call the 'Forgotten Virtues' series. In the first book, Never Alone, a young boy comes of age after his father dies in a plane crash, and he has to make it alone. Never Alone is now available in paperback, Kindle and Nook. The second book, Strange Courage, takes Carl from his High School graduation to his recovery from a nasty divorce. The third book, Second Chances, takes Carl from his ex-wife's death and the custody of his son to his heroic death at age 59. The fourth book, Promises Kept, depicts how his grandchildren react and adjust to his death. In the final book, Grandfather's Way, his youngest and most timid granddaughter emerges from the shadow of her overachieving family and accomplishes more in four months than most do in a lifetime. I use many foraging references with a lot of the plants I profile in these articles in those books.
View all posts by tedmanzer →
This entry was posted in general nature and tagged five leaflets, grape family, oxalate compounds, Parthenocissus, poison ivy lookalike, red fall foliage, seeds remain dormant, tendrils, Virginia Creeper. Bookmark the permalink.

9 Responses to Virginia creeper is another aggressive native vine