It’s October, and while summer temperatures keep holding on fall weather is inevitable. Pumpkins are also on display. They are major decorative symbols of both Halloween and Thanksgiving.

Pumpkins find their way on nearly every porch in the fall. Some are carved. Some are painted. Some become the heads for scarecrows and such. Some just stand alone.

They also are a big attraction for our State Fair. I always look forward to seeing the biggest pumpkin. Often, they can be over a thousand pounds.

When I was a kid we raised a lot of pumpkins. Our summers in Maine were perfect. We never grew any that big, but we occasionally had them approach a hundred pounds. I was raised by depression era parents, so our biggest use for pumpkins was for food.

Decorative value was a distant second. Larger fruits never seemed to have the same cooking qualities, so we only planted a few of the large fruited types. I think my parents only grew them for us kids.

The growing season was too short for sweet potatoes, so pumpkins and squashes had to satisfy our taste for traditional holiday pies. We tried growing sweet potatoes a few times, but we didn’t have enough hot days to develop husky roots. We could grow pumpkins like crazy, and we ate a lot of pumpkin and squash pie.

All our pumpkins and squash were kept in the basement. It was heated, but much cooler than the rest of the house. We also kept a dehumidifier down there, so storage conditions for these fruits were pretty good. Pumpkins should be stored at about fifty to sixty degrees and moderate humidity. Extremely low humidity is not good, either.

We also saved some of our garden seeds, and we had an unusual breeding program for pumpkins and winter squash. As pumpkins and squash began to degrade we cut off bad spots and used the rest. We never wasted anything.

If more fruits got rotten places on them, we canned or froze the excess. We also cleaned up the seeds and roasted them in the oven. They make a tasty nutritious snack.

Eventually, we were left with only the soundest fruits. These were the ones we used as our seed for the following year. I know this isn’t a controlled experiment, but I believe over the years we improved the keeping ability of our pumpkins and winter squashes. We threw

very few of them away.

Modern day varieties are hybrids and not the open pollinated types of fifty years ago, so this technique would not be appropriate. Saving seeds is not practiced much anymore. Some people save heirloom tomatoes, peppers, beans and other fruits, but in general most people buy their garden seeds and plants, even heirloom ones.

As I drive down the road and observe all the pumpkins I can rest assured that cooler temperatures are on their way. I’m not saying setting pumpkins on your porch will hasten fall, but it can at least get us in the mood. The heat has got to break soon. 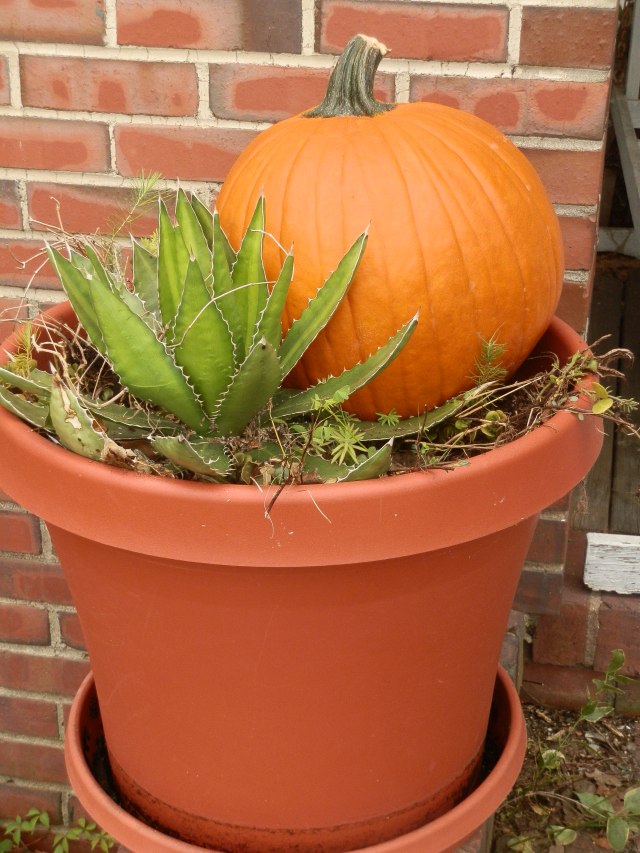 Plump pumpkin chilling with an agave

I grew up in Old Town Maine and got a B.S. at the University of Maine in Plant Sciences/ minor in Botany. From there I moved to West Virginia and earned a M.S. in Agronomy at WVU. I also met my wife there. She grew up in rural WV as the daughter of tenant farmers who raised cattle and hogs. Their lifestyle at times was one of subsistence and I learned a lot from them. I've always been a foraging buff, but combining my formal botanical knowledge with their practical 'Foxfire-type' background opened up my eyes a little more. I now teach agriculture to high school students at Northeastern High School in Elizabeth City, NC. My wife teaches with me and we make a great team. I also write a weekly nature/foraging column for the local paper (dailyadvance.com). I also have written several Christian nature/adventure novels that I plan to publish eventually. One is a five book family saga I call the 'Forgotten Virtues' series. In the first book, Never Alone, a young boy comes of age after his father dies in a plane crash, and he has to make it alone. Never Alone is now available in paperback, Kindle and Nook. The second book, Strange Courage, takes Carl from his High School graduation to his recovery from a nasty divorce. The third book, Second Chances, takes Carl from his ex-wife's death and the custody of his son to his heroic death at age 59. The fourth book, Promises Kept, depicts how his grandchildren react and adjust to his death. In the final book, Grandfather's Way, his youngest and most timid granddaughter emerges from the shadow of her overachieving family and accomplishes more in four months than most do in a lifetime. I use many foraging references with a lot of the plants I profile in these articles in those books.
View all posts by tedmanzer →
This entry was posted in foraging and tagged fifty to sixy degrees, heirloom vegetables, moderate humidity, pumpkin, sweet potatoes, symbol of fall. Bookmark the permalink.