Agaves can be dual purpose succulents

It’s nice to be able to go on vacation and not worry about houseplants or flower gardens. There are two ways to accomplish this. The first is to set up an automatic watering system. The second is to choose plants that use little water.

Xeriscaping is becoming increasingly popular. Indoor succulents are also a hot commodity. Aloe, jade plant and ghost plant (Graptopetalum) are consistent sellers in our interior market. Hens and chicks, Sedums, prickly pears and ice plant tend to be the mainstays for exterior use.

Many agave cultivars are adapted to our climate. Still others will thrive indoors if given plenty of light. Some prosper in both environments. Often, people call them century plants.

Some folks might be familiar with agave as the source of tequila. The only agave I know of that is commercially used for tequila is the blue agave, and it isn’t hardy here. Agave syrup can be found in specialty stores, but it’s not a common sweetener used around here.

Agave plants basically have no stem until they bloom. Then, some varieties might shoot out a flower stalk more than 30 feet tall. Plants often don’t flower until they are decades old, hence the name century plant. Many folks have seen different agaves but didn’t know what they were.

Thick succulent leaves emerge to form a basal rosette. These plants may be variegated or any solid color ranging from green to grayish pink to blue. They look a little like Aloe vera or thick-leaved yucca plants.

Most agave are hardy to zone 9. Many are hardy to zone 7. My experience is that wet soils are a greater deterrent to survival than pure temperature. Last winter all my agave plants in pots survived, while my two planted in the ground perished. It was a wet winter as well as a cold one.

These succulents are great in decorative clay pots, and they perform well in raised sand mounded rock gardens. Their texture is conversational. In addition, many color patterns are available for this area. The best thing about them is that they require little care.

A problem could be that they don’t mix well with perennials typically used in our region. Too much water can be a major problem. Excellent soil drainage is a must.

On the culinary side, roasted agave hearts, leaves and stalks can often be found in authentic Mexican food stores, particularly in the southwest. They are frequently on the menu in restaurants there too.

Medicinally, agave has been used to treat many ailments. Constipation, jaundice, dysentery, scalp infections, and toothaches are just a few of the maladies that herbalists treat with agave. Sap and other preparations from both the roots and leaves can be used internally and topically.

Agave has anti-inflammatory and antiseptic properties. Hence it is often used to heal wounds, burns, and skin irritations. Native Americans in the southwestern states and in Mexico used agave root preparations to treat snakebites.

Agave sap can be a skin irritant to some people, much like that from mangoes. Most folks aren’t affected and there don’t appear to be any drug interaction problems with agave. 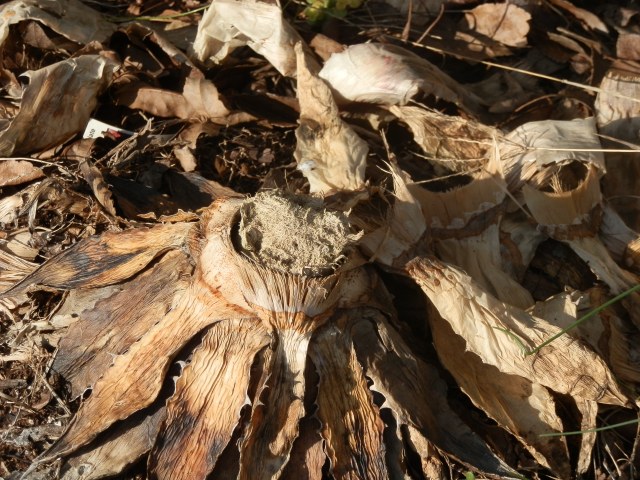 This oe planted in the ground didn’t fare so well.

They make great house plants too

I grew up in Old Town Maine and got a B.S. at the University of Maine in Plant Sciences/ minor in Botany. From there I moved to West Virginia and earned a M.S. in Agronomy at WVU. I also met my wife there. She grew up in rural WV as the daughter of tenant farmers who raised cattle and hogs. Their lifestyle at times was one of subsistence and I learned a lot from them. I've always been a foraging buff, but combining my formal botanical knowledge with their practical 'Foxfire-type' background opened up my eyes a little more. I now teach agriculture to high school students at Northeastern High School in Elizabeth City, NC. My wife teaches with me and we make a great team. I also write a weekly nature/foraging column for the local paper (dailyadvance.com). I also have written several Christian nature/adventure novels that I plan to publish eventually. One is a five book family saga I call the 'Forgotten Virtues' series. In the first book, Never Alone, a young boy comes of age after his father dies in a plane crash, and he has to make it alone. Never Alone is now available in paperback, Kindle and Nook. The second book, Strange Courage, takes Carl from his High School graduation to his recovery from a nasty divorce. The third book, Second Chances, takes Carl from his ex-wife's death and the custody of his son to his heroic death at age 59. The fourth book, Promises Kept, depicts how his grandchildren react and adjust to his death. In the final book, Grandfather's Way, his youngest and most timid granddaughter emerges from the shadow of her overachieving family and accomplishes more in four months than most do in a lifetime. I use many foraging references with a lot of the plants I profile in these articles in those books.
View all posts by tedmanzer →
This entry was posted in general nature and tagged agave, basal rosette, century plant, culinary uses, medicinal herb, require little care, succulent, well drained soil, xeriscaping. Bookmark the permalink.

3 Responses to Agaves can be dual purpose succulents