This time of year, along the highway in full sun we see a tan upright grass with thick feathery tops. When other vegetation is growing, we rarely notice it. Until seed heads develop, this grass is easily ignored.

It’s called bushy bluestem (Andropogon glomeratus) and it’s one of the native warm-season grasses that grows around here. In fact, it grows all over the eastern US. It’s even common in the southwestern states. Other common names are bushy beardgrass, lowland broomsedge and bushy broom grass.

Bushy bluestem is a bunch-type grass that forms upright clumps from two to six feet tall. Summer foliage is a blue-green color, while persistent upright stalks are copper colored in winter.

Economically, it has no major value. As a forage grass, its nutritive value and palatability are low. It’s important from a conservation standpoint in that it can grow in wet places where many plants struggle. Most of its close relatives grow better on drier sites.

Wildlife, especially birds, use it for cover and to make nests. Songbirds eat the seeds in the late fall and winter. It occasionally becomes food for deer when snow covers the ground, but it’s not one of their preferred foods.

Bushy bluestem is a great choice for naturalizing in wet areas. It requires very little care and it’s not necessary to add additional fertilizer. Mowing bushy bluestem makes it grow thicker, but it detracts from the upright ornamental effect.

While this prairie grass is a plant that often grows in waste places, I think it has a place in the ornamental landscape. Its upright stiff growth habit makes an interesting contrast to most flowerbed residents. The flower stalks are showy throughout winter until spring, far more than those of broomsedge and other Andropogon species.

This plant is not even remotely approaching threatened status, so I would have few reservations transplanting it from the wild. Proper permission from the landowner would be my biggest concern. It is a heavy seed producer, so if anything, harvesting some from the wild might reduce its natural spreading.

The stiff flower stalks make great filler material to stretch out dried or fresh cut flower arrangements. Floral paint adheres well too. I wouldn’t think it would be difficult to get permission to cut some stems along rural roadsides.

This grass also has another use. The dry stems and flowerheads make great tinder for starting campfires. In areas where snow is more prevalent, these clumps emerge above the white stuff and tinder can be collected with ease. Starting fires with this material is easy, even for amateurs. When hiking or enjoying any outdoor winter activity, a good fire can make the experience safer and more pleasurable.

This grass has no food foraging value. Modern use as a medicinal herb is limited, too. At one time native Americans made an infusion from the roots to treat poison ivy, but it’s not used anymore to any degree. 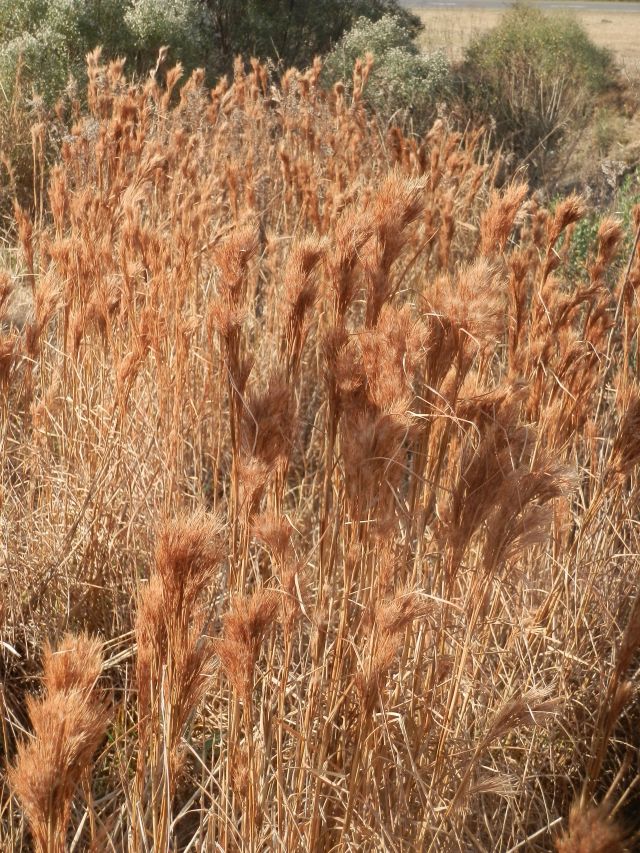 Close-up of a seed head

Another close-up of a bushy bluestem seed head

I grew up in Old Town Maine and got a B.S. at the University of Maine in Plant Sciences/ minor in Botany. From there I moved to West Virginia and earned a M.S. in Agronomy at WVU. I also met my wife there. She grew up in rural WV as the daughter of tenant farmers who raised cattle and hogs. Their lifestyle at times was one of subsistence and I learned a lot from them. I've always been a foraging buff, but combining my formal botanical knowledge with their practical 'Foxfire-type' background opened up my eyes a little more. I now teach agriculture to high school students at Northeastern High School in Elizabeth City, NC. My wife teaches with me and we make a great team. I also write a weekly nature/foraging column for the local paper (dailyadvance.com). I also have written several Christian nature/adventure novels that I plan to publish eventually. One is a five book family saga I call the 'Forgotten Virtues' series. In the first book, Never Alone, a young boy comes of age after his father dies in a plane crash, and he has to make it alone. Never Alone is now available in paperback, Kindle and Nook. The second book, Strange Courage, takes Carl from his High School graduation to his recovery from a nasty divorce. The third book, Second Chances, takes Carl from his ex-wife's death and the custody of his son to his heroic death at age 59. The fourth book, Promises Kept, depicts how his grandchildren react and adjust to his death. In the final book, Grandfather's Way, his youngest and most timid granddaughter emerges from the shadow of her overachieving family and accomplishes more in four months than most do in a lifetime. I use many foraging references with a lot of the plants I profile in these articles in those books.
View all posts by tedmanzer →
This entry was posted in general nature and tagged Andropogon glomeratus, bunch-type grass, bushy bluestem, conservation grass, feathery tops, floral design, floral design use, heavy seed producer, landscape potential, pest resistant, prairie grass, requires little care, warm-season grass. Bookmark the permalink.

2 Responses to Bushy bluestem is a native prairie grass