Some wild birds rely on people

There are over three dozen species of sparrows and roughly 75 percent of them can be found in North Carolina. Most inhabit open areas with a few trees. Some have distinctive calls. However, there is one sparrow never found truly in the wild, and that’s the house sparrow, commonly called the English sparrow.

House sparrows originated from the middle east. From there, they moved to Europe and Asia. Eventually, many stowed away on boats to the Americas, Australia and many other places.

House sparrows only live in places inhabited by people. Be it in cities, suburbs or farms, there is always one constant. People are nearby. Humans give them protection without realizing it.

Most bird watchers or casual feeders of birds don’t particularly like these squatters eating the feed meant for other songbirds. However, people don’t often hunt sparrows down and kill them either. Consequently, over hundreds of years, these birds have lost most of their fear of humans and are comfortable within a few yards of them.

That’s not true of many predators of these house sparrows. Hawks, foxes and other predators will not often venture that close to humans, so essentially sparrows use people as a shield from predators. Some will fall prey to cats, but there are still far fewer predators for them to worry about. Even feral cats usually won’t venture as close to people as sparrows will.

In town, sparrows eat discarded food, birdseed and pet food, but they also eat weed seeds and insects. They will even follow lawnmowers to get bugs stirred up by them. On farms they eat grain, livestock feed, flies on and around livestock and various weed seeds.

As these birds gain familiarity with individual people, they often can be trained to eat out of one’s hand. This is especially true in winter when food is scarce. When I was growing up, I remember several times after big snowstorms I could entice them to perch on my finger. I was sitting in the driveway grilling trout and eating crackers one summer evening, and I coaxed one to perch on my finger. I think I still have some pictures of that.

House sparrows prefer to build their nests in human-constructed structures with openings they can pass through. Streetlights, roof overhangs and vines growing on buildings make great nesting sites. Sometimes they build nests in shade trees or shrubbery near homes. They usually recycle their nests, too.

They are prolific breeders. Females lay up to eight eggs per clutch, and they often raise four broods per year. Eggs take a little less than two weeks to hatch.

Like chickens, sparrows develop a pecking order and are quite territorial. I was waiting at a local fast-food drive-through and watched several sparrows scavenge for scraps. It was obvious which ones were dominant and which ones had to wait their turn. The darker colored birds appeared to be the most aggressive.

Except for domesticated animals, we don’t always think about how one species relies on another. People generally don’t purposely feed sparrows, nor do we want them nesting in or near our homes. Still, they do it anyway and aren’t overly obnoxious, so they get away with it. 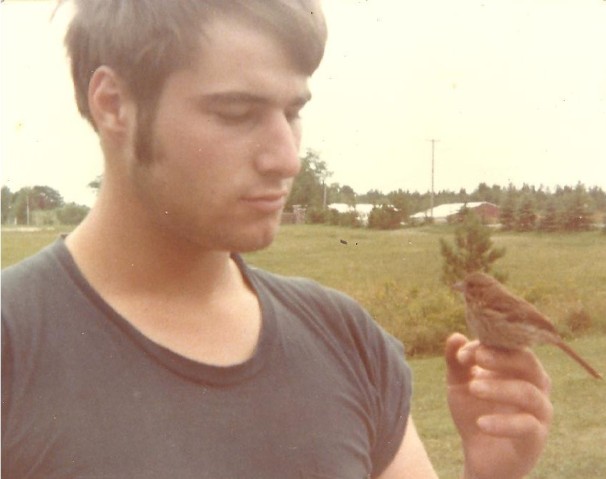 This little bird was hungry and trusting.

I grew up in Old Town Maine and got a B.S. at the University of Maine in Plant Sciences/ minor in Botany. From there I moved to West Virginia and earned a M.S. in Agronomy at WVU. I also met my wife there. She grew up in rural WV as the daughter of tenant farmers who raised cattle and hogs. Their lifestyle at times was one of subsistence and I learned a lot from them. I've always been a foraging buff, but combining my formal botanical knowledge with their practical 'Foxfire-type' background opened up my eyes a little more. I now teach agriculture to high school students at Northeastern High School in Elizabeth City, NC. My wife teaches with me and we make a great team. I also write a weekly nature/foraging column for the local paper (dailyadvance.com). I also have written several Christian nature/adventure novels that I plan to publish eventually. One is a five book family saga I call the 'Forgotten Virtues' series. In the first book, Never Alone, a young boy comes of age after his father dies in a plane crash, and he has to make it alone. Never Alone is now available in paperback, Kindle and Nook. The second book, Strange Courage, takes Carl from his High School graduation to his recovery from a nasty divorce. The third book, Second Chances, takes Carl from his ex-wife's death and the custody of his son to his heroic death at age 59. The fourth book, Promises Kept, depicts how his grandchildren react and adjust to his death. In the final book, Grandfather's Way, his youngest and most timid granddaughter emerges from the shadow of her overachieving family and accomplishes more in four months than most do in a lifetime. I use many foraging references with a lot of the plants I profile in these articles in those books.
View all posts by tedmanzer →
This entry was posted in general nature and tagged eight eggs per clutch, four broods per year, House sparrow, human constructed structures, live near people, recycle nests. Bookmark the permalink.

4 Responses to Some wild birds rely on people