Waiting for the kids and thinking of my mother

Christmastime is a great time for reflection. I’m waiting for my kids to come, and I remember when each arrived for the first time. When Daniel was born, we were new to the whole thing. We got in a hurry. At the hospital, one of the nurses broke Roberta’s water, so they kept her. Otherwise, they likely would have sent us home. More than twenty-four hours later the doctor made the decision to take him by C-section. It was probably a good thing as he had the cord wrapped around his neck twice.

Oliver was a little simpler in a way. The hardest part was convincing the doctor to let Bert try to have the baby normally. Labor took much less time, but the delivery wasn’t without its uniqueness either. Shortly after midnight, it became obvious Oliver was coming into this world normally, but it was less clear that he was going to be born without hitting the floor. The doctor juggled him twice before finally catching him. My hands were right below his and just above floor level, in case Dr. Kerr juggled Oliver again.

By the time we were ready for Grace to come, we thought we had this whole baby thing figured out. However, every time we thought it was time, the labor would slow down. I bet we walked close to ten miles that early April day. Finally, at about five in the afternoon, we headed for the hospital. She was born before six.

Since then, we have realized that all our children are different. Daniel never shut up, Oliver never talked, and Grace was somewhere in between. They’re still a lot like that.

It makes me think back to my youth. My siblings and I are all unique. I’m sure you can also recount stories from the arrival of each of us like it just happened. I often struggle remembering things that just happened, but things about the coming of your children are memories that are retained forever with such vividness that makes one wonder why we can’t remember everything like that.

I remember back in 2015, when Roberta, Grace, and I took a surprise trip up to Maine for Christmas. There was no snow, and the lakes weren’t even frozen. After considerable scouring of the local woods, we cut a fir tree and set it in the front yard of the cabin. Shortly afterward, the three of us began decorating. We strung popcorn, and I collected lichens, cones, and other natural items for decoration until we had a beautiful Christmas tree.

After that, we drove back to Old Town to surprise Mom and Dad on Christmas eve. Of all the gifts I have given in my life, I think that one was the biggest surprise. In an age of the internet, gift cards and the like, that was an experience I won’t soon forget. I hope you don’t either. Merry Christmas Mom. Maybe in the future, Roberta and I might be able to equal that one.

I’ll always remember scrounging the woods or out by the airport in search of the perfect Christmas tree. I also remember how they were always ‘the prettiest tree we ever had’. Dad would put the lights on, and I’ll never forget those big multicolored bulbs. Some of them blinked and others did not. Once the lights and tree topper were on, Dad would hang that deer ornament. After that, his duties were concluded and the rest of us finished up. In the afternoon, we would head to Gray to do Christmas again at the farm.

During Christmas break, if there was enough snow, Jim and I would take turns on our bobsled run behind the house. One year when there was plenty of ice but not much snow, we even built an iceboat with a cedar mast and a piece of thick plastic for a sail. That thing would fly.

Every family has unique memories of Christmas. I’m sure my children and grandchildren will cherish different things than I do be they foods or activities. That’s what makes it so special. 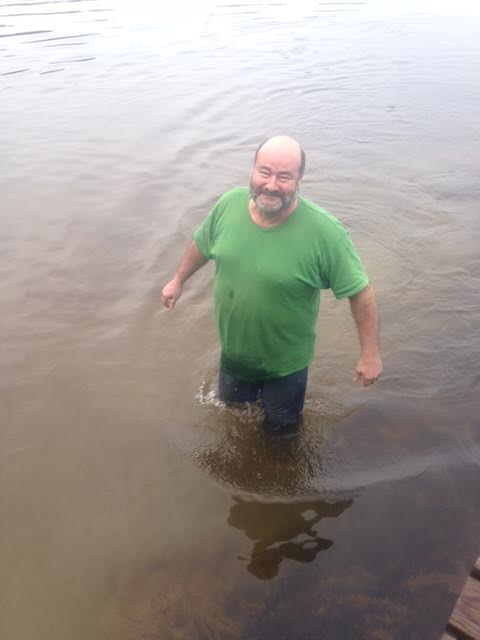 My only Christmas swimming experience in Maine (2015) 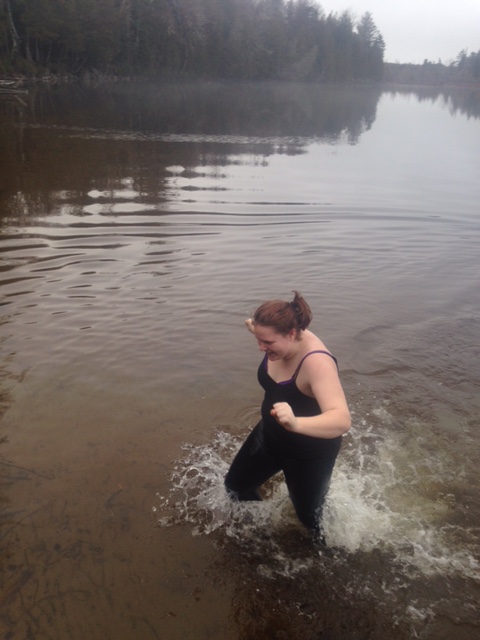 I grew up in Old Town Maine and got a B.S. at the University of Maine in Plant Sciences/ minor in Botany. From there I moved to West Virginia and earned a M.S. in Agronomy at WVU. I also met my wife there. She grew up in rural WV as the daughter of tenant farmers who raised cattle and hogs. Their lifestyle at times was one of subsistence and I learned a lot from them. I've always been a foraging buff, but combining my formal botanical knowledge with their practical 'Foxfire-type' background opened up my eyes a little more. I now teach agriculture to high school students at Northeastern High School in Elizabeth City, NC. My wife teaches with me and we make a great team. I also write a weekly nature/foraging column for the local paper (dailyadvance.com). I also have written several Christian nature/adventure novels that I plan to publish eventually. One is a five book family saga I call the 'Forgotten Virtues' series. In the first book, Never Alone, a young boy comes of age after his father dies in a plane crash, and he has to make it alone. Never Alone is now available in paperback, Kindle and Nook. The second book, Strange Courage, takes Carl from his High School graduation to his recovery from a nasty divorce. The third book, Second Chances, takes Carl from his ex-wife's death and the custody of his son to his heroic death at age 59. The fourth book, Promises Kept, depicts how his grandchildren react and adjust to his death. In the final book, Grandfather's Way, his youngest and most timid granddaughter emerges from the shadow of her overachieving family and accomplishes more in four months than most do in a lifetime. I use many foraging references with a lot of the plants I profile in these articles in those books.
View all posts by tedmanzer →
This entry was posted in Uncategorized and tagged Christmas, decoration, fir, snow, traditions. Bookmark the permalink.