When the topic of survival food comes up, acorns can’t be far behind. Unfortunately, not all are created equal. Oaks are divided into two groups, white oaks and red oaks. The acorns of red oak species like water, willow, scarlet, black, and Southern red oak are high in tannins and very bitter. These acorns also take two seasons to mature. White oak species like white, post, chestnut and swamp chestnut oaks have less bitter acorns, which mature in one year.

Another species is a bit enigmatic. Live oak (Quercus virginiana) has leaves without lobes that are evergreen. Wood grain is similar to red oaks, but acorns mature in one season and are generally sweet, although some individual trees produce less palatable nuts. Botanists have been confused on how to classify this species. Some call them white oaks, some a red, and some put live oak in its own group.

Live oaks produce long narrow shiny dark-colored fruits in clusters of three to five. Live oak is also one of our historically more valuable trees. They have curved spreading branches that were once used in shipbuilding. The wood is very dense and very hard. The frame of the famed USS Constitution and many other ships of that era were made from it. Wheel hubs and machine cogs were also carved from this dense wood. Heating value is high, so it is mostly used for firewood now.

In earlier days the acorns were used for making flour like many acorns were. Usually nuts must be soaked in water to leach out the bitter tannins. Floating acorns are discarded as they either contain insect larvae or have not developed properly. After several rinses the nutmeats can be dried and ground into a flour that has a nutty flavor and contains no gluten.

Acorn flour is available at certain natural food stores and outlets online, but it is pricy. The extensive leaching process makes it that way. That is why I like the live oak. Two advantages are that nut set is usually prolific and tannin content is low, meaning less leaching or none at all.

I have found that there is tremendous variation in nut sweetness among live oaks. Some trees produce nuts that are nearly as mild as pecans and others are too bitter to eat without some preparation.

I always sample a few before I pick very many. It is the only oak species I collect around here. White oaks have mild nutmeats, but trees aren’t used in landscaping very much. In the woods, wildlife usually clean them up fairly quickly.

Live oaks, on the other hand are used much more ornamentally. Their broad crowns throw tremendous shade and curb the wind. Some beautiful specimens are at Albemarle Hospital and the College of the Albemarle. Seed set wasn’t too good this year, so I didn’t forage any acorns. I always admire these trees though. They are a symbol of the south and one of our most important soil conservation trees on the outer banks. Ocracoke Island is covered with them. 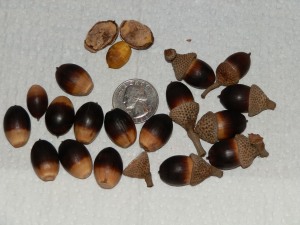 I grew up in Old Town Maine and got a B.S. at the University of Maine in Plant Sciences/ minor in Botany. From there I moved to West Virginia and earned a M.S. in Agronomy at WVU. I also met my wife there. She grew up in rural WV as the daughter of tenant farmers who raised cattle and hogs. Their lifestyle at times was one of subsistence and I learned a lot from them. I've always been a foraging buff, but combining my formal botanical knowledge with their practical 'Foxfire-type' background opened up my eyes a little more. I now teach agriculture to high school students at Northeastern High School in Elizabeth City, NC. My wife teaches with me and we make a great team. I also write a weekly nature/foraging column for the local paper (dailyadvance.com). I also have written several Christian nature/adventure novels that I plan to publish eventually. One is a five book family saga I call the 'Forgotten Virtues' series. In the first book, Never Alone, a young boy comes of age after his father dies in a plane crash, and he has to make it alone. Never Alone is now available in paperback, Kindle and Nook. The second book, Strange Courage, takes Carl from his High School graduation to his recovery from a nasty divorce. The third book, Second Chances, takes Carl from his ex-wife's death and the custody of his son to his heroic death at age 59. The fourth book, Promises Kept, depicts how his grandchildren react and adjust to his death. In the final book, Grandfather's Way, his youngest and most timid granddaughter emerges from the shadow of her overachieving family and accomplishes more in four months than most do in a lifetime. I use many foraging references with a lot of the plants I profile in these articles in those books.
View all posts by tedmanzer →
This entry was posted in foraging and tagged "live oak", "Quercus virginiana", "soil conservation", acorns, mild, nature, palatable. Bookmark the permalink.