These warm spring evenings bring out familiar sounds. The most distinctive one is the call of the male spring peeper, which reminds some of crickets chirping. At less than an inch and a half long, spring peepers are the tiniest frogs in North America. They can be tan, gray or dark brown, but all have a dark “X” on their backs. These amphibians also have toe pads that grip like suction cups for climbing.

Abundant in our swamps and other wet wooded areas, these critters are rarely seen. Many of you have steamrolled them with your vehicles on rainy evenings, but other than that you might not have noticed them. They’re nocturnal and pretty well camouflaged. They eat mostly insects and spiders, which I’m sure is fine with most people. It’s a shame so many wind up under our tires.

The American toad is another amphibian that rings in spring. The call of these rough-skinned creatures is a high pitched trill. Each blast sometimes lasts a half minute. Toads can occasionally weigh over a pound and have been known to live for thirty years. Females are usually much larger than males.

They are insect eating machines, feasting on mosquito larvae and other insects. They also eat earthworms, snails, slugs, fish and just about anything else that fits into their mouths. Since toads are slower than most of their jumping relatives, one might expect them to be easy prey for other animals. Generally they are not. Toads have special structures called paratoid glands, which produce a foul-smelling, toxic chemical. For this reason it’s wise not to pick them up, but don’t worry. Toads don’t give you warts.

Many consider toads welcome guests to their gardens. This is generally true, but I once had a swimming pool and they would breed and fill the water with ropes of eggs that hatched into tadpoles. If their breeding season were later in the year the warty devils likely would have chosen a different spot, but an unopened pool doesn’t have the deterrent of strong chlorine. For a month or two out of the year they were not my friends, but that doesn’t mean I avoided all amphibians.

The bullfrog is the largest frog in North America. Bullfrogs are solitary and very territorial. They rarely meet, except to fight over territory or mate. Their distinctive croaking is music to my ears.

Bullfrogs have voracious appetites. They eat insects, crayfish, earthworms, fish, other frogs (especially leopard frogs, but even other bullfrogs), small turtles, snakes, baby birds, mice and voles. They are most active at night. Their skin contains glands which secrete substances that render them unpalatable to predators, so most mammals leave them alone.

Remove the skin and their legs are a delicacy. The pale pink flesh is similar to chicken tenderloins, but clean them up thoroughly or they have a bitter fishy flavor. Whether you like yours fried with breading and Cajun spices or grilled with a little lemon, butter and garlic they are truly a spring treat which lasts through summer. 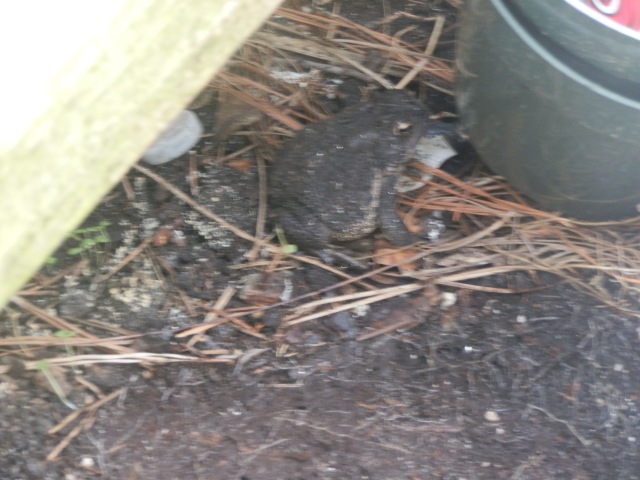 Lethargic bullfrog on a cold morning

I grew up in Old Town Maine and got a B.S. at the University of Maine in Plant Sciences/ minor in Botany. From there I moved to West Virginia and earned a M.S. in Agronomy at WVU. I also met my wife there. She grew up in rural WV as the daughter of tenant farmers who raised cattle and hogs. Their lifestyle at times was one of subsistence and I learned a lot from them. I've always been a foraging buff, but combining my formal botanical knowledge with their practical 'Foxfire-type' background opened up my eyes a little more. I now teach agriculture to high school students at Northeastern High School in Elizabeth City, NC. My wife teaches with me and we make a great team. I also write a weekly nature/foraging column for the local paper (dailyadvance.com). I also have written several Christian nature/adventure novels that I plan to publish eventually. One is a five book family saga I call the 'Forgotten Virtues' series. In the first book, Never Alone, a young boy comes of age after his father dies in a plane crash, and he has to make it alone. Never Alone is now available in paperback, Kindle and Nook. The second book, Strange Courage, takes Carl from his High School graduation to his recovery from a nasty divorce. The third book, Second Chances, takes Carl from his ex-wife's death and the custody of his son to his heroic death at age 59. The fourth book, Promises Kept, depicts how his grandchildren react and adjust to his death. In the final book, Grandfather's Way, his youngest and most timid granddaughter emerges from the shadow of her overachieving family and accomplishes more in four months than most do in a lifetime. I use many foraging references with a lot of the plants I profile in these articles in those books.
View all posts by tedmanzer →
This entry was posted in foraging and tagged american toad, amphibians, bullfrog, nature, spring peeper. Bookmark the permalink.

4 Responses to Sounds of Spring