Callie was a part of our family for nearly 11 years. She was a hound shepherd mix and as stubborn as they come. There were times she’d simply exasperate me. She knew not to chase, but she loved it too much. She knew I’d punish her and put her on the cable run, but she did it anyway. Still I loved her and I know she loved all of us.

We found her dead in the yard two days after her eleventh birthday. She had no injuries we could detect, and she hadn’t been sick, though she didn’t eat anything that morning. In fact, she was in incredible shape for her age, lean and muscular; she still had blazing speed and the energy of a puppy. I thought about autopsying her, but since I couldn’t bring her back, what did it really matter what the cause of death was. I couldn’t do that to her.

We picked her up at an animal shelter in Calais, Maine in July of 2001. We have a cabin on Big Lake in Princeton about 25 miles away. Since we got her in Calais it was only natural to name her Callie. Callie loved the lake. There was always so much to do and so many things to chase. Our cats never liked that game and simply laid down and didn’t play along. They tolerated but tired of her and she with them. Callie was at home in the water. She also loved the boat. I’ll always remember her in her favorite spot, right up on the bow regardless of how fast we were going. I loved that dog!

This isn’t my typical post, but I just had to vent. Here are a few pictures of her. 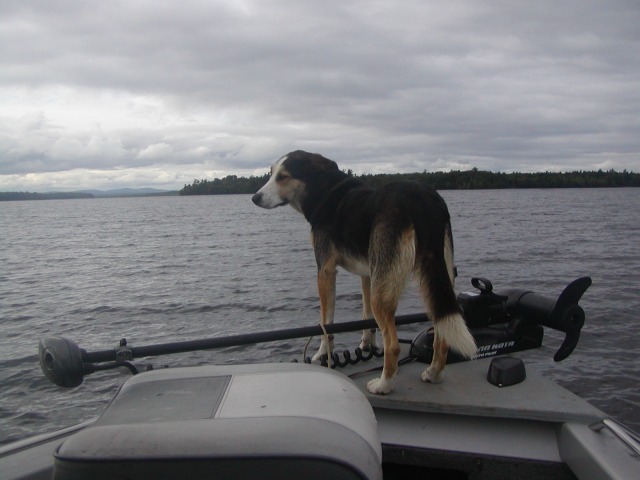 Callie in HER spot

I grew up in Old Town Maine and got a B.S. at the University of Maine in Plant Sciences/ minor in Botany. From there I moved to West Virginia and earned a M.S. in Agronomy at WVU. I also met my wife there. She grew up in rural WV as the daughter of tenant farmers who raised cattle and hogs. Their lifestyle at times was one of subsistence and I learned a lot from them. I've always been a foraging buff, but combining my formal botanical knowledge with their practical 'Foxfire-type' background opened up my eyes a little more. I now teach agriculture to high school students at Northeastern High School in Elizabeth City, NC. My wife teaches with me and we make a great team. I also write a weekly nature/foraging column for the local paper (dailyadvance.com). I also have written several Christian nature/adventure novels that I plan to publish eventually. One is a five book family saga I call the 'Forgotten Virtues' series. In the first book, Never Alone, a young boy comes of age after his father dies in a plane crash, and he has to make it alone. Never Alone is now available in paperback, Kindle and Nook. The second book, Strange Courage, takes Carl from his High School graduation to his recovery from a nasty divorce. The third book, Second Chances, takes Carl from his ex-wife's death and the custody of his son to his heroic death at age 59. The fourth book, Promises Kept, depicts how his grandchildren react and adjust to his death. In the final book, Grandfather's Way, his youngest and most timid granddaughter emerges from the shadow of her overachieving family and accomplishes more in four months than most do in a lifetime. I use many foraging references with a lot of the plants I profile in these articles in those books.
View all posts by tedmanzer →
This entry was posted in Uncategorized and tagged dog, family, Pets. Bookmark the permalink.