Few homeowners know this plant’s name, but many have cursed it. I’ve heard people describe it as that vine with the baby watermelons. Creeping cucumber or Guadeloupe cucumber are two of its most common names.

This delicate-looking vine (Melothria pendula) is far from timid. It has a growth rate almost comparable to kudzu. I’ve even had people bring it to me asking if it was kudzu. Some have inquired as to its edibility.

That’s a loaded question. According to the state of North Carolina it is poisonous, but many sources list it as edible. I’ve eaten a lot of it, so it can’t be but so poisonous.

There is one rule of thumb foragers should not ignore. Only eat small quantities initially. In this case make sure fruits are young and firm. They taste like cucumbers and can be eaten raw like berries. They’re great in salads. Vines are aggressive, so short supply is seldom a concern.

Older fruits will taste somewhat bitter, so you likely wouldn’t eat many anyway. Upon making the decision to ignore that advice you wouldn’t have to worry about irregularity for a while. Other than diarrhea I can find no other toxicity symptoms, but that alone can be sufficient to discourage most people. I have also found no sources that can pinpoint the toxicity to any compounds. Alkaloids and saponic glycosides are sometimes mentioned as being present but never implicated as dangerous.

The seedy fruits turn yellow and then nearly black upon maturity. Once they reach this stage they are extremely bitter, so toxicity shouldn’t be a problem for sane people. If they taste bitter spit them out. I suppose strong vinaigrette dressing and other flavors of a salad could complicate this.

Creeping cucumber is a perennial vine so it is important to identify individual plants for eradication. That sounds simple but it also spreads profusely by seed. Birds love the tiny fruits even when they are totally unpalatable to humans.

Delicate stems and soft English ivy-shaped leaves with tendrils can envelop shrubs in short order. Tiny yellow flowers look like cucumber or watermelon blooms and it’s easy to tell which are male and which are female just as it is on domestic types.

Those who have it want desperately to rid themselves of this uninvited guest. It covers anything, from vines to vinyl siding. It even grows underneath the siding. It can slither through any imaginable crack or crevasse.

We can’t blame this one on the Europeans or the Asians. This little devil is native. Control is difficult. Chemicals such as Round-up are effective early, but once this vine grows on your plants the only recourse is hand weeding.

The real funny, or from my perspective, tragic part of the story is that some nurseries and seed companies actually sell this plant as an ornamental. People flock to buy it just as they do trumpet vine, ironweed, ornamental deadnettle and Bradford pears. The next thing you know someone will develop ornamental dandelions or market spur weed as a ground cover. 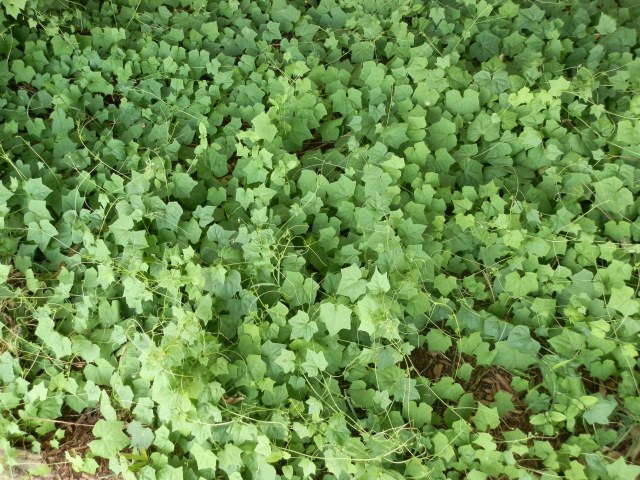 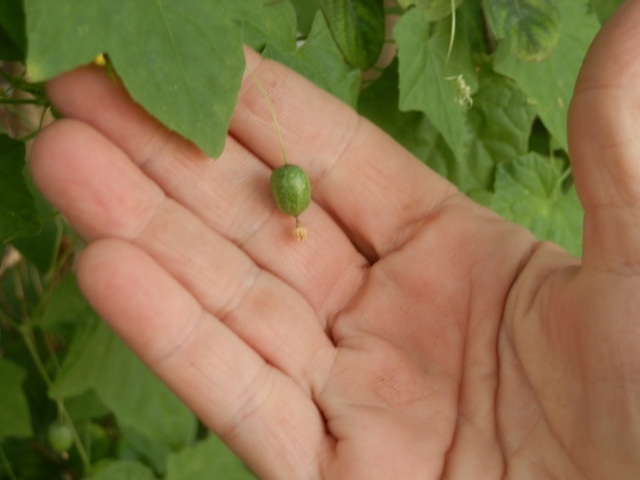 I grew up in Old Town Maine and got a B.S. at the University of Maine in Plant Sciences/ minor in Botany. From there I moved to West Virginia and earned a M.S. in Agronomy at WVU. I also met my wife there. She grew up in rural WV as the daughter of tenant farmers who raised cattle and hogs. Their lifestyle at times was one of subsistence and I learned a lot from them. I've always been a foraging buff, but combining my formal botanical knowledge with their practical 'Foxfire-type' background opened up my eyes a little more. I now teach agriculture to high school students at Northeastern High School in Elizabeth City, NC. My wife teaches with me and we make a great team. I also write a weekly nature/foraging column for the local paper (dailyadvance.com). I also have written several Christian nature/adventure novels that I plan to publish eventually. One is a five book family saga I call the 'Forgotten Virtues' series. In the first book, Never Alone, a young boy comes of age after his father dies in a plane crash, and he has to make it alone. Never Alone is now available in paperback, Kindle and Nook. The second book, Strange Courage, takes Carl from his High School graduation to his recovery from a nasty divorce. The third book, Second Chances, takes Carl from his ex-wife's death and the custody of his son to his heroic death at age 59. The fourth book, Promises Kept, depicts how his grandchildren react and adjust to his death. In the final book, Grandfather's Way, his youngest and most timid granddaughter emerges from the shadow of her overachieving family and accomplishes more in four months than most do in a lifetime. I use many foraging references with a lot of the plants I profile in these articles in those books.
View all posts by tedmanzer →
This entry was posted in foraging and tagged creeping cucumber, edible, foraging, herbaceous vine, invasive weed, little watermelons. Bookmark the permalink.