Sweet nectar from the southern swamps

Some time ago I wrote about black gum (Nyssa sylvatica). This week I’d like to elaborate a little about its swamp dwelling cousin, the water tupelo (Nyssa Aquatica). Along with the bald cypress, it comprises a large volume of the standing timber raised in our coastal plain swampland.

Tupelo is an easy tree to identify. The base of the trunk is greatly swelled as is the bald cypress. However, cypress trees are fluted near the ground while tupelo gums taper smoothly to a wider base.

Large broad pointed leaves are often eight or more inches long and emerge singly on the stems. Leaf edges are basically smooth with the occasional serration. Unlike black gum, the fall color is less than spectacular. Leaves turn yellow and do not persist long once they do. They also don’t all turn at once, so their impact is less.

Generally, water tupelo occurs in pure stands of roughly even aged trees. The main reason is that tupelo is what foresters call an intolerant tree. Young seedlings can’t develop under a canopy of dense shade, so unless taller trees are removed younger ones can’t grow. Many species share this trait.

Tupelo is a heavy seed producer. In mid to late fall a deluge of grape-sized green oblong berry-like fruits fall from the branches. Each contains a single large seed. In fact, the fleshy part comprises far less of these drupes than the pits. Most people call them berries, but since each one contains a single seed they more properly called drupes.

Numerous wildlife species eat them. Thousands of fruits collect and float around in the swamp water, settling in large masses. A local forester I know collects them behind the high for school and can scoop out a whole truckload with ease to use for conservation purposes.

This fruit is edible and not as astringent as sour gum, but I regard them as strictly a survival food. Furthermore, when one considers the swamp environment and that these drupes can only be collected once they fall, cleaning them up enough to make them sanitary might be difficult. I have no desire to deliberately subject myself to giardia or any other waterborne parasite or pathogen.

I will partake in the honey though. As I wrote earlier, black gum makes a fine honey, but that made from the water tupelo is truly Cadillac. Color is light and resistance to crystallizing is incredible. From what I’ve read, honey from the white tupelo in Florida is even better.

Not all trees will produce fruit. Likewise, nectar can’t be obtained from them all either. This is another of those dioecious trees. Some are male and some are female.

Some specimens are even what botanists call polygamodioecious, meaning that certain individual flowers can have both male and female parts. This explains why some trees have a sparse fruit set while another growing nearby is loaded with fruit.

Male trees can produce so much pollen that people with pollen allergies can have major flare-ups without knowing the source of their discomfort. Flowers are high in the trees and inconspicuous. Leave it to those males to be an irritation. 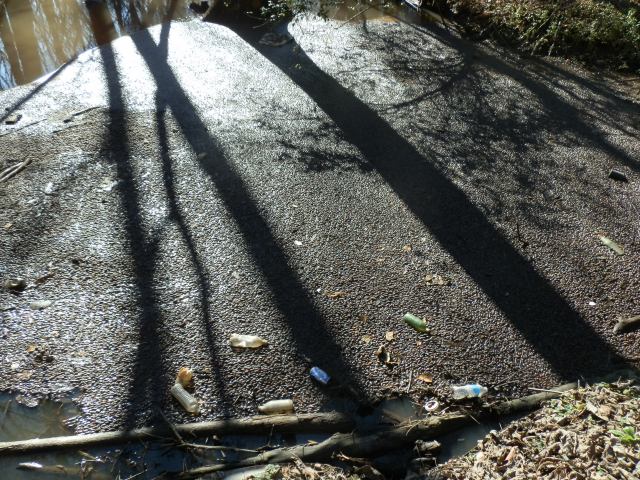 Close-up of the berry-like drupes

I grew up in Old Town Maine and got a B.S. at the University of Maine in Plant Sciences/ minor in Botany. From there I moved to West Virginia and earned a M.S. in Agronomy at WVU. I also met my wife there. She grew up in rural WV as the daughter of tenant farmers who raised cattle and hogs. Their lifestyle at times was one of subsistence and I learned a lot from them. I've always been a foraging buff, but combining my formal botanical knowledge with their practical 'Foxfire-type' background opened up my eyes a little more. I now teach agriculture to high school students at Northeastern High School in Elizabeth City, NC. My wife teaches with me and we make a great team. I also write a weekly nature/foraging column for the local paper (dailyadvance.com). I also have written several Christian nature/adventure novels that I plan to publish eventually. One is a five book family saga I call the 'Forgotten Virtues' series. In the first book, Never Alone, a young boy comes of age after his father dies in a plane crash, and he has to make it alone. Never Alone is now available in paperback, Kindle and Nook. The second book, Strange Courage, takes Carl from his High School graduation to his recovery from a nasty divorce. The third book, Second Chances, takes Carl from his ex-wife's death and the custody of his son to his heroic death at age 59. The fourth book, Promises Kept, depicts how his grandchildren react and adjust to his death. In the final book, Grandfather's Way, his youngest and most timid granddaughter emerges from the shadow of her overachieving family and accomplishes more in four months than most do in a lifetime. I use many foraging references with a lot of the plants I profile in these articles in those books.
View all posts by tedmanzer →
This entry was posted in foraging and tagged bald cypress, berry-like drupe, cypress trees, honey, nature, Nyssa, Nyssa Aquatica, polygamodioecious, swamp, Water tupelo. Bookmark the permalink.