Too often people choose not to include shrubs that lose their leaves when landscaping their homes. They want their grounds to be green all year. I agree that landscaping should enhance property during all seasons, but there are some deciduous plants that fit in quite nicely.

I drove up to Maine at Christmastime and noticed a wild shrub at the peak of its attractiveness. It had no leaves at all. That same shrub grows well in eastern North Carolina and is native, albeit uncommon. It’s called winterberry holly. The wild version is often called possumhaw.

Winterberry holly is a medium sized to large shrub. Like other hollies it is dioecious, meaning that male and female flowers generally reside in different plants. Actually, most hollies aren’t truly dioecious. More properly they are polygamodioecious, meaning some plants are mostly male or mostly female but have a few hermaphroditic flowers as well. Flowers containing both male and female parts are called perfect flowers.

To achieve maximum fruit set, plants from both sexes must be present. However that doesn’t necessarily mean you have to plant male shrubs in your landscape. Hollies break a lot of botanical rules. They can be polygamodioecious and they can cross with other holly species. American holly is one example with compatible pollen and there are wild American hollies everywhere. Generally, one male for every five to ten females is sufficient for adequate pollination.

At any rate, female winterberries are striking when the foliage drops. Usually one hard frost is enough to accomplish this. If you observe them before leaf fall you will notice they are covered with bright red berries. However, since holly berries are poisonous to humans and most wildlife except birds they remain on the plants all winter. Color is a coveted commodity during winter and winterberry holly is a tough and tolerant species.

Like most hollies, winterberries are adapted to sunny places. When I drove northward I consistently saw them on the sunny side of the highway but rarely on the shady side. Also, they were growing on wet and I assume acidic soils. Does that sound familiar?

Winterberry hollies work well as foundation plants. They are most effective mixed in on the east, south or west sides of a building. Avoid them on the north-facing side. They also naturalize well around the edges of properties.

These deciduous shrubs have few insect or disease problems. Other than scale and sooty mold there are few pest issues. However, these are two prevalent obstacles in this locale. One notable point is that scale damage normally occurs later in the year and sooty mold follows scale infestations. Depending upon the first hard frost this problem might last only a few weeks.

A few weeks ago I wrote about yaupon holly and its uses in the landscape and for tea. Yaupon holly tea is rich in caffeine. Winterberry tea is also made from the leaves and has similar flavor but contains no caffeine. Fruit from either species is toxic so let the birds have the berries. They’re bitter anyway. 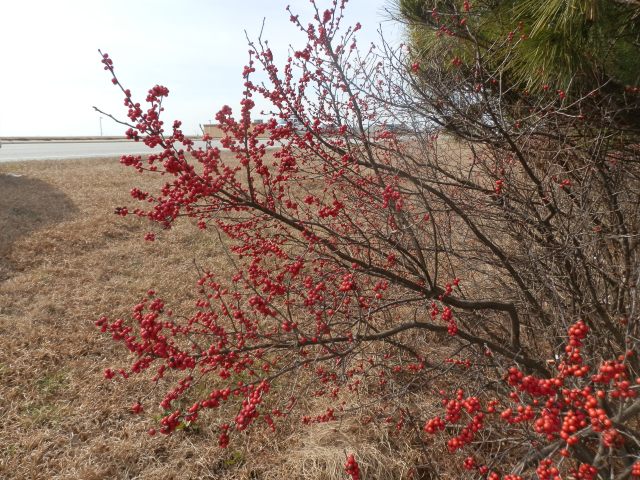 winterberry holly bush being taken over by pine trees 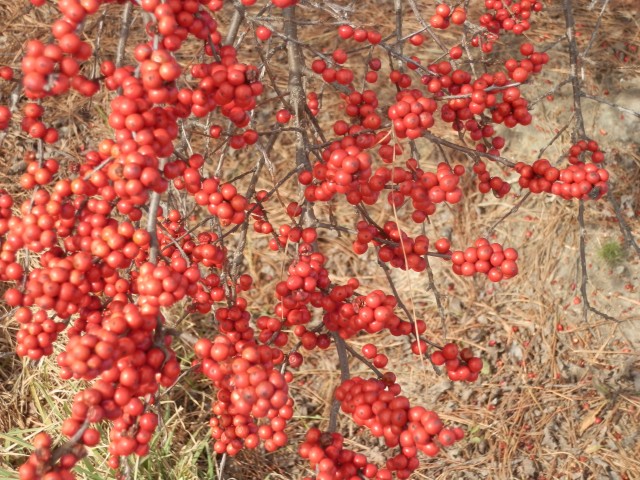 I grew up in Old Town Maine and got a B.S. at the University of Maine in Plant Sciences/ minor in Botany. From there I moved to West Virginia and earned a M.S. in Agronomy at WVU. I also met my wife there. She grew up in rural WV as the daughter of tenant farmers who raised cattle and hogs. Their lifestyle at times was one of subsistence and I learned a lot from them. I've always been a foraging buff, but combining my formal botanical knowledge with their practical 'Foxfire-type' background opened up my eyes a little more. I now teach agriculture to high school students at Northeastern High School in Elizabeth City, NC. My wife teaches with me and we make a great team. I also write a weekly nature/foraging column for the local paper (dailyadvance.com). I also have written several Christian nature/adventure novels that I plan to publish eventually. One is a five book family saga I call the 'Forgotten Virtues' series. In the first book, Never Alone, a young boy comes of age after his father dies in a plane crash, and he has to make it alone. Never Alone is now available in paperback, Kindle and Nook. The second book, Strange Courage, takes Carl from his High School graduation to his recovery from a nasty divorce. The third book, Second Chances, takes Carl from his ex-wife's death and the custody of his son to his heroic death at age 59. The fourth book, Promises Kept, depicts how his grandchildren react and adjust to his death. In the final book, Grandfather's Way, his youngest and most timid granddaughter emerges from the shadow of her overachieving family and accomplishes more in four months than most do in a lifetime. I use many foraging references with a lot of the plants I profile in these articles in those books.
View all posts by tedmanzer →
This entry was posted in Uncategorized and tagged bright red berries, deciduous holly, dioecious, hermaphroditic flowers, poisonous berries, polygamodioecious, possumhaw, scale, shrub, sooty mold, sunny places, winterberry holly. Bookmark the permalink.