It pays to condition your houseplants before bringing them inside

Cooler weather is approaching and it’s time to think about preparing your houseplants for their return to the inside. Tropical plants thrive outdoors during summer. Sometimes they get too accustomed to those conditions. When that happens they struggle when brought back indoors.

We need to prepare them for an environment with less light and less humidity. These two factors will stress plants. Stress affects their ability to produce sugars for growth and maintenance. It also makes them more susceptible to pests and diseases.

Therefore, we must gradually get plants accustomed to conditions that more closely resemble an interior environment. Ficus trees, for example will drop leaves like crazy if we take them directly from a sunny place to an indoor spot. Even if we place them in a south facing window they’ll still drop at least half of their leaves. If we don’t adjust their water to account for less photosynthesis they might lose even more. With proper conditioning you can still expect to lose about 25 percent of them.

It usually takes five or six weeks to completely acclimatize these trees to handle drastically lower light levels of the interior environment. We’re probably a little past that as I plan to move mine indoors in mid-November, weather permitting. Some more tender plants I’ll move sooner.

Before moving houseplants indoors we must also make sure they are free of pest and disease infestations. Insects are much easier to control outdoors. They become a much greater problem when plants become stressed from reduced light.

Mealybugs, scale, aphids and spider mites are common houseplant pests. They rob plants of energy and make them more prone to diseases. These little parasites also interact with the plants to produce a sticky substance called honeydew. This honeydew gets on carpet, walls, furniture and just about anything else in your house.

Pruning is something else to consider. I like to do it gradually and not too much immediately before moving plants indoors. Pruning encourages growth and we don’t want to do that with winter approaching. We want healthy plants, but we want their growth to slow down. For this reason fertilization going into winter is generally not desirable.

We also need to monitor soil moisture levels. When plants get less light they don’t use as much water. Excessive water means less oxygen to plant roots, which leads to root rot. Some plants, like jade plants, are especially susceptible. They can tolerate being slightly overwatered if they are outside. Indoors they aren’t as forgiving.

I admit I’m generalizing a little. Some plants don’t require as much light and must be kept in dense shade outdoors anyway. Their only adjustment is to the change in humidity. Philodendrons, pothos, African violets and peace lilies don’t require much conditioning.

Keeping houseplants on the porch or patio during the summer is something many folks enjoy. However, due to some of the necessary conditioning involved with moving them out in the spring and inside in fall some people don’t bother. I don’t know how many times I’ve heard people say that every time they move a plant it dies.

Bringing houseplants outside in spring isn’t necessary. Improved growing conditions do rejuvenate them though. Often by the time spring arrives some are pretty spindly. That’s usually an easy fix.

When we bring plants indoors we are generally slowing their growth rate down. There’s no harm in that. All we need to do is not give them mixed signals. Pruning and fertilizing encourage growth. Insufficient light means less energy will be produced to accommodate that. It’s a balance. 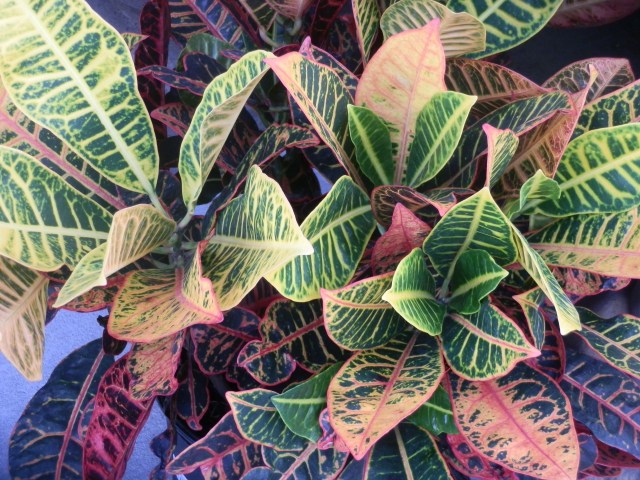 This croton has been conditioned and is ready to go inside.

I grew up in Old Town Maine and got a B.S. at the University of Maine in Plant Sciences/ minor in Botany. From there I moved to West Virginia and earned a M.S. in Agronomy at WVU. I also met my wife there. She grew up in rural WV as the daughter of tenant farmers who raised cattle and hogs. Their lifestyle at times was one of subsistence and I learned a lot from them. I've always been a foraging buff, but combining my formal botanical knowledge with their practical 'Foxfire-type' background opened up my eyes a little more. I recently retired from teaching high school agriculture after 25 years teaching with my wife. Until recently I wrote a weekly nature/foraging column for the local paper (dailyadvance.com). I also have written several Christian nature/adventure novels that can be purchased on Amazon in Kindle format. One is a five book family saga I call the 'Forgotten Virtues' series. In the first book, Never Alone (presently out of print), a young boy comes of age after his father dies in a plane crash, and he has to make it alone. The second book, Strange Courage, takes Carl from his High School graduation to his recovery from a nasty divorce. The third book, Second Chances, takes Carl from his ex-wife's death and the custody of his son to his heroic death at age 59. The fourth book, Promises Kept, depicts how his grandchildren react and adjust to his death (this one is not yet published). In the final book, Grandfather's Way, his youngest and most timid granddaughter emerges from the shadow of her overachieving family and accomplishes more in four months than most do in a lifetime. I use many foraging references with a lot of the plants I profile in these articles in those books. I also wrote a romance novel titled Virginia. It is available on Amazon and is a different type of romance from a man's perspective.
View all posts by tedmanzer →
This entry was posted in general nature and tagged acclimatize, aphids, conditioning houseplants, ficus trees, honeydew, less humidity, lower light levels, mealybugs, pest and disease infestations, root rot, scale, spider mites, tropical plants. Bookmark the permalink.