Aronia is a native super-fruit

A few years ago I wrote a column about chokeberries. They were common in the places I picked blueberries in Maine. Huckleberries were too, and they’re great, so maybe they can be a future column.

The Genus name for chokeberry is Aronia. I guess that sounds more appetizing than chokeberry. Maybe that’s why nutritionists and landscapers are pushing it.

Three native species exist in the eastern US. Red chokeberry (Aronia arbutifolia) has smaller fruits and is quite sour. Black has larger fruit, similar in size to most highbush blueberry cultivars. There is also a purple berry species (Aronia floribunda), intermediate in size, color and taste. The red type grows in our area but it’s not overly common.

I remember collecting the black ones (Aronia melanocarpa) and using them for jelly. As far as fresh market goes, these fruits are a little leathery and quite tart. My dad said they weren’t poisonous, so I ate them. With a little sugar, their pleasant taste is realized. Rhubarb lovers know what that’s like.

Recently, someone emailed me about growing them as they are one of the latest in a line of promoted super-fruits. I’m not sure how they’d perform in the coastal plain. They’re adapted to less brutally hot summers. Travel to the Carolina Mountains, and you will find all three species of Aronia growing wild.

I’ve often thought about trying to raise some because the dried fruits remind be of currants. Currants are illegal to grow in North Carolina and many other states. Gooseberries and currants are alternate hosts to the white pine blister rust fungus that at one time put the white pine timber industry in jeopardy. Consequently, it’s often hard to find currants, and they are an essential ingredient to authentic mincemeat, a favorite of mine.

So why do people consider Aronia a super-fruit. Remember the buzzword, antioxidants. Antioxidants help keep our bodies running efficiently. The black ones have more than the red, so they would have greater potential as a fruit crop.

However, all types have beautiful clusters of white flowers and would make attractive landscape shrubs. Bees love these flowers almost as much as they love Abelia blooms. Fall color reminds me a lot of winged euonymus. It’s bright red.

That’s where I see Aronia’s greatest potential. It would make a great naturalizing shrub, particularly if deer damage isn’t a concern. Deer like them. Rabbits do too. Both eat the fruit and use the deciduous branches for winter browse.

In the northern states and eastern Canada, Aronia grow best in full sun and likely fruit yields would be much higher there. Here in the southeast, we would have to plant them in similar locations as we plant lilac or rhododendron. They need sun to flower, but too much will lead to their downfall.

Aronia performs best in well-drained soil. That said, it’s not especially tolerant of drought. That can be a problem in the coastal plain, so be prepared to water them if rain is absent for a prolonged period. Our climate might be a stretch for this shrub, but challenges are fun. 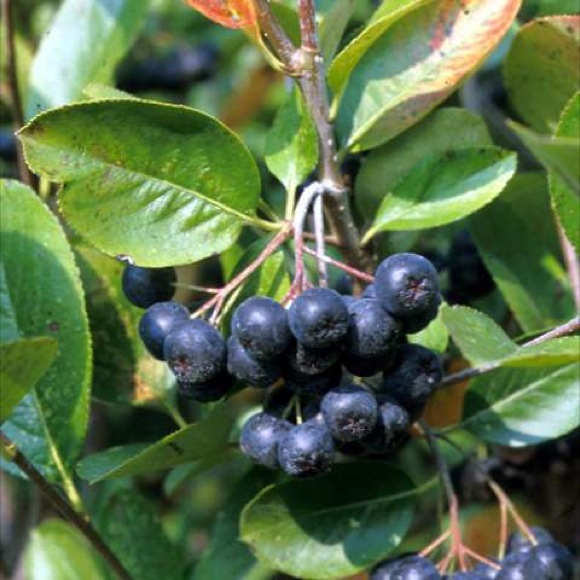 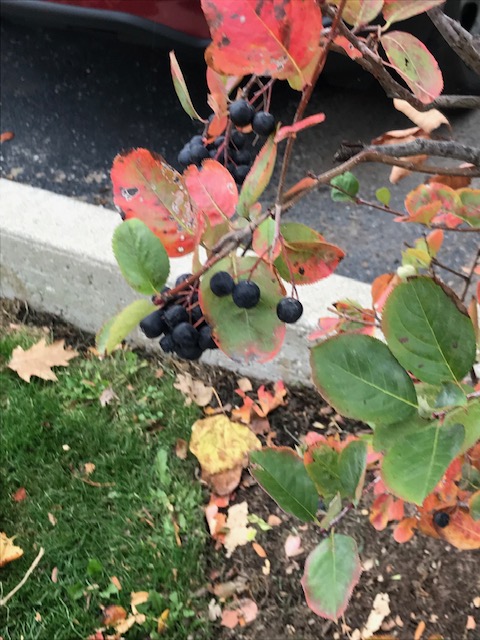 I found this in a landscape planting in Indianapolis recently.

I grew up in Old Town Maine and got a B.S. at the University of Maine in Plant Sciences/ minor in Botany. From there I moved to West Virginia and earned a M.S. in Agronomy at WVU. I also met my wife there. She grew up in rural WV as the daughter of tenant farmers who raised cattle and hogs. Their lifestyle at times was one of subsistence and I learned a lot from them. I've always been a foraging buff, but combining my formal botanical knowledge with their practical 'Foxfire-type' background opened up my eyes a little more. I recently retired from teaching high school agriculture after 25 years teaching with my wife. Until recently I wrote a weekly nature/foraging column for the local paper (dailyadvance.com). I also have written several Christian nature/adventure novels that can be purchased on Amazon in Kindle format. One is a five book family saga I call the 'Forgotten Virtues' series. In the first book, Never Alone (presently out of print), a young boy comes of age after his father dies in a plane crash, and he has to make it alone. The second book, Strange Courage, takes Carl from his High School graduation to his recovery from a nasty divorce. The third book, Second Chances, takes Carl from his ex-wife's death and the custody of his son to his heroic death at age 59. The fourth book, Promises Kept, depicts how his grandchildren react and adjust to his death (this one is not yet published). In the final book, Grandfather's Way, his youngest and most timid granddaughter emerges from the shadow of her overachieving family and accomplishes more in four months than most do in a lifetime. I use many foraging references with a lot of the plants I profile in these articles in those books. I also wrote a romance novel titled Virginia. It is available on Amazon and is a different type of romance from a man's perspective.
View all posts by tedmanzer →
This entry was posted in foraging and tagged Aronia, Aronia arbutifolia, Aronia floribunda, Aronia melanocarpa, bees, chokeberry, currant-like, deer food, jelly, landscape shrubs, super-fruit. Bookmark the permalink.