Much of our landscaping has been hit hard by cold weather

Ever since the first of the year we’ve experienced strange weather in eastern North Carolina. A few days have been warm. We’ve even seen temperatures in the 70s, but most of it has been cold. Many folks have experienced frozen water lines. Landscaping has been hit hard too.

We’ve had two significant snowstorms already this year. People from Great Lake or New England areas might not consider these snowstorms major, but here in eastern North Carolina it’s a big deal.

It’s not just the snow. Single digit temperatures have been commonplace since the year began. One night it was around zero. Some people don’t realize it, but having snow on the ground actually might have helped us. The insulation provided by a few inches of snow might have saved a few pipes and plants.

Snow can make some plant problems worse, however. It’s more difficult for animals to find food. Mice, deer and rabbits can eat the bark and buds. That can kill trees and shrubs.

At this point there’s really nothing we can do about our plants but wait until spring. Damage has been done. Problems will only be compounded by dealing with them now. That includes trying to repair trees that have been split carrying the weight of snow and ice.

Many evergreens have a lot of bronze colored leaves. They might come out of it, but I’m skeptical. Osmanthus and Indian hawthorn have been particularly hard hit. Many hollies in the area show signs of winter damage. However, damage will only be exacerbated if we try to treat the shrubbery now.

Some large shrubs like wax myrtle can show bronzing and have many broken branches from snow load. The good thing here is that they will not only tolerate, they will thrive from severe pruning in spring. Other shrubs will die if pruned severely.

Most conifers won’t tolerate renewal pruning. Leyland cypress, Cryptomeria, arborvitae and all the pines will not grow back when severely pruned. If they have been severely damaged they need to be removed.

Even deciduous plants should not be pruned now, especially spring blooming ones. Trimming them back into shape will only serve to limit their flowering. Let them flower and then shape them. This also is true for fruit trees.

I think most of our winter damaged plants will recover. However, many of us try to stretch the hardiness zone a little and this year we’re likely to get burned. It’s fun to grow plants like Eucalyptus, banana, and some of the palms, but eventually a winter like this one comes along and plants get damaged.

The main thing to remember is that what’s done is done. Now is not the time to try to doctor those plants. Wait until spring when it’s more comfortable. We’re getting close here. 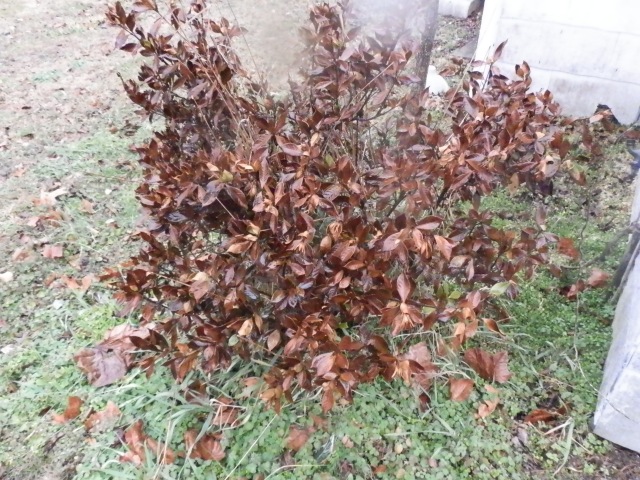 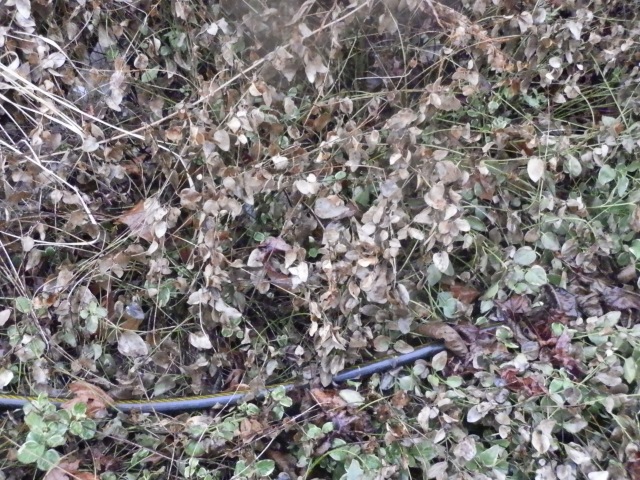 I’ve never seen Vinca major with this much winter damage this far south. 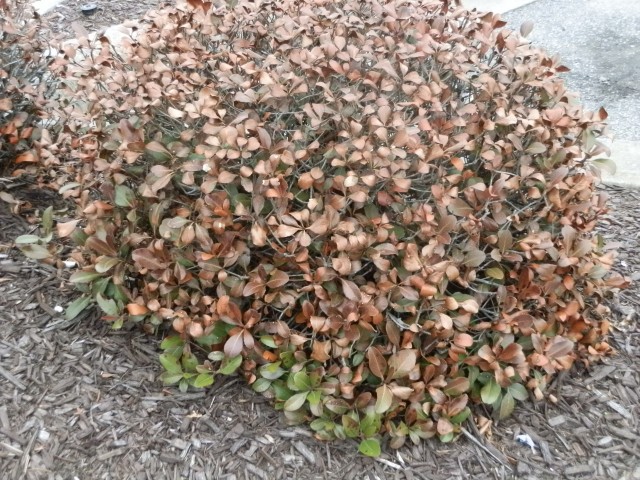 Snow may have saved the base of this Indian Hawthorn.

I grew up in Old Town Maine and got a B.S. at the University of Maine in Plant Sciences/ minor in Botany. From there I moved to West Virginia and earned a M.S. in Agronomy at WVU. I also met my wife there. She grew up in rural WV as the daughter of tenant farmers who raised cattle and hogs. Their lifestyle at times was one of subsistence and I learned a lot from them. I've always been a foraging buff, but combining my formal botanical knowledge with their practical 'Foxfire-type' background opened up my eyes a little more. I recently retired from teaching high school agriculture after 25 years teaching with my wife. Until recently I wrote a weekly nature/foraging column for the local paper (dailyadvance.com). I also have written several Christian nature/adventure novels that can be purchased on Amazon in Kindle format. One is a five book family saga I call the 'Forgotten Virtues' series. In the first book, Never Alone (presently out of print), a young boy comes of age after his father dies in a plane crash, and he has to make it alone. The second book, Strange Courage, takes Carl from his High School graduation to his recovery from a nasty divorce. The third book, Second Chances, takes Carl from his ex-wife's death and the custody of his son to his heroic death at age 59. The fourth book, Promises Kept, depicts how his grandchildren react and adjust to his death (this one is not yet published). In the final book, Grandfather's Way, his youngest and most timid granddaughter emerges from the shadow of her overachieving family and accomplishes more in four months than most do in a lifetime. I use many foraging references with a lot of the plants I profile in these articles in those books. I also wrote a romance novel titled Virginia. It is available on Amazon and is a different type of romance from a man's perspective.
View all posts by tedmanzer →
This entry was posted in general nature and tagged bronze colored leaves, Cold temperature damage, deer, gardenia, hollies, Indian Hawthorn, mice, Osmanthus, rabbits, snow damage, snow insulation. Bookmark the permalink.