What a difference a month makes – and then another two weeks

The first five days of 2018 saw low temperatures in the teens in Elizabeth City. Night temperatures hovered in the single digits the next three nights, one of them around zero. During that stretch daytime temperatures remained in the 20s. Mercury reached into the 70s four days later.

Weather fluctuated for a while until about the tenth of February when things turned warm again. We had no frosts until March 5th and daytime temperatures frequently topped 70 degrees. It’s natural to ask if this means anything and if so what are the implications?

Judging from all the flowers one might think it was late March or early April. Pears, saucer magnolias and forsythia have been in full bloom since mid-February. Mild nights are likely more responsible than anything. However, when daytime temperatures consistently flirt with the 80s and root zones warm, dormancy ends.

In most years plants break dormancy gradually. Take sugar maple for example. I used to make maple syrup and collected sap well before any visible signs of bud swell. Were there any sugar maples around here, this spring would have been lousy for syrup yields.

This is the part that concerns me. It’s early March and we could yet have some very cold temperatures. The further plants progress into active growth, even a light frost could injure them. Should temperatures suddenly dip into the mid-twenties all foliage could be killed and plants would have to form new buds and start again. If fruit buds die trees would be barren this year.

Because of the mild February many folks have the itch to plant gardens and flowerbeds. My advice is, unless one is prepared for poor stands and stunted plants, waiting a few weeks is the best option. Raised beds, plastic mulches, row covers, cloches and even space heaters can provide extra insurance toward success. It’s still a gamble.

It might sound like I’m being negative about this mild weather. I’m not. We had some harsh weather in late December and early January and evidence of winter injury is everywhere. All foliage is dead on my big eucalyptus, and I’m not sure if the inner bark is damaged on the main trunk. I’ll have to wait and see if buds develop. My loquat got hammered too.

This unseasonable weather hastens determining winter injury to landscape plants. Bud swell means plants aren’t dead. If no buds have begun to grow people can check for live bark trees and shrubs by scraping small sections and hoping to see green. Cut back to the green and hope. As far as planting goes, be patient.

Here comes the update. As for the temperatures since March 5th, things have been different. We’ve avoided severe cold temperatures but have had several freezes, none severe, and daytime temperatures have been cool. This has ruined some of the beautiful flowers but it has also slowed growth and that has been a good thing. Everything is so wet  that gardeners have been slowed too. 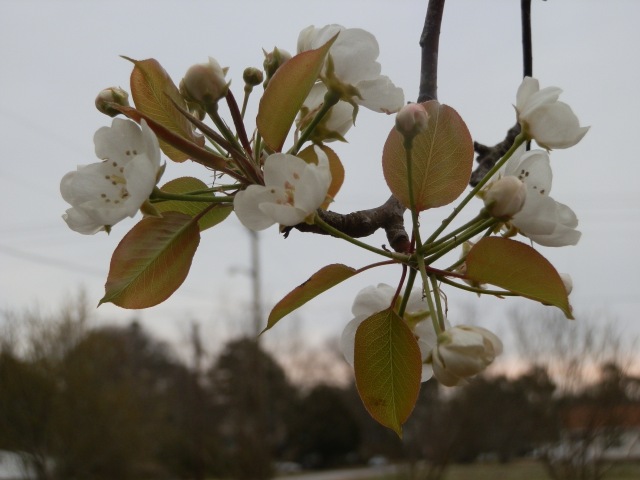 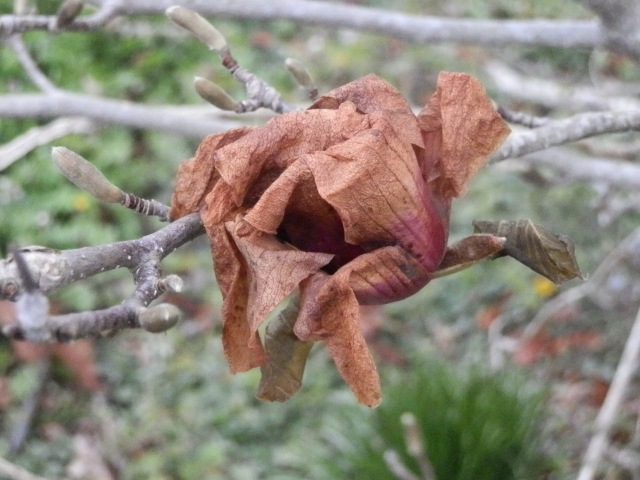 This picture of a saucer magnolia flower was taken on March 10th after a few frosts.

I grew up in Old Town Maine and got a B.S. at the University of Maine in Plant Sciences/ minor in Botany. From there I moved to West Virginia and earned a M.S. in Agronomy at WVU. I also met my wife there. She grew up in rural WV as the daughter of tenant farmers who raised cattle and hogs. Their lifestyle at times was one of subsistence and I learned a lot from them. I've always been a foraging buff, but combining my formal botanical knowledge with their practical 'Foxfire-type' background opened up my eyes a little more. I now teach agriculture to high school students at Northeastern High School in Elizabeth City, NC. My wife teaches with me and we make a great team. I also write a weekly nature/foraging column for the local paper (dailyadvance.com). I also have written several Christian nature/adventure novels that I plan to publish eventually. One is a five book family saga I call the 'Forgotten Virtues' series. In the first book, Never Alone, a young boy comes of age after his father dies in a plane crash, and he has to make it alone. Never Alone is now available in paperback, Kindle and Nook. The second book, Strange Courage, takes Carl from his High School graduation to his recovery from a nasty divorce. The third book, Second Chances, takes Carl from his ex-wife's death and the custody of his son to his heroic death at age 59. The fourth book, Promises Kept, depicts how his grandchildren react and adjust to his death. In the final book, Grandfather's Way, his youngest and most timid granddaughter emerges from the shadow of her overachieving family and accomplishes more in four months than most do in a lifetime. I use many foraging references with a lot of the plants I profile in these articles in those books.
View all posts by tedmanzer →
This entry was posted in general nature and tagged active growth, Eucalyptus, frost injury, loquat, warm February, weird weather. Bookmark the permalink.