Clary Sage is an important crop in northeast North Carolina

Most folks have seen it from their vehicles.  Few likely know what it is or why it’s grown. Some might say that the flowers look like those of salvia. They’d be right.

The plant in question is clary sage (Salvia sclarea). Take a drive down Route 17 into Bertie County and you’ll see a lot of it. You might even be tempted to cut a bunch for a flower arrangement. I strongly advise against that.

Not only is that stealing, but you’ll regret being a plant thief. Plants are beautiful in the field. However, their aroma will likely force you to heave your bouquet out the window within a few miles.

The big surprise is that the major use of that crop resides in its ability to make pleasant aromas linger. It might not smell very sweet, but it contains a chemical called sclareol that is used in soaps, perfumes, deodorants and the like. It enhances their fragrance and duration.

Clary sage is a biennial plant. That means it produces only foliage in its first year. Plants flower and complete their life cycle during the second season.

Farmers trick the plant and can make fields flower every year. They do this by planting seeds in late summer or fall and letting plants go through a winter. The following year clary sage flowers and is harvested.

Though a true biennial, many folks consider clary sage to be a short-lived perennial. When planted in flower gardens it often persists for several years. It’s also hardy to zone five. I have not spoken to any farmers to see if they have had much success carrying fields over from year to year, but I understand it can be done.

This plant grows best on sandy soils with good drainage. We have plenty of those in eastern North Carolina. Clary sage tolerates drought but not wet soil, especially in winter. Full sun is necessary for optimal growth.

Pollinators love the stuff. When in bloom I’ve noticed gobs of bees and other insects working the flowers.

From a distance fields appear lavender when in bloom. However, individual flowers run from off-white to pink to purple.

Clary sage is a large plant, sometimes reaching heights of more than five feet. Typical size is probably more like two thirds of that.

Due to its aggressive nature, some environmentalists are concerned that clary sage might become invasive. It’s classified as a noxious weed in some states. So far, North Carolina is not one of them and planted acres continue to increase.

In recent years this salvia has exploded in popularity. It has long been used as a medicinal herb. Uses and claims are numerous and varied. The most common uses are for stomach and kidney problems and to cleanse and soothe the eyes.

Clary sage has contributed greatly to the whole science of aromatherapy. Sometimes it’s used by itself. Generally, it enhances other fragrances.

The greatest importance of clary sage is how it affects other things. It might not smell or taste appetizing in and of itself, but it makes other products smell and taste better. 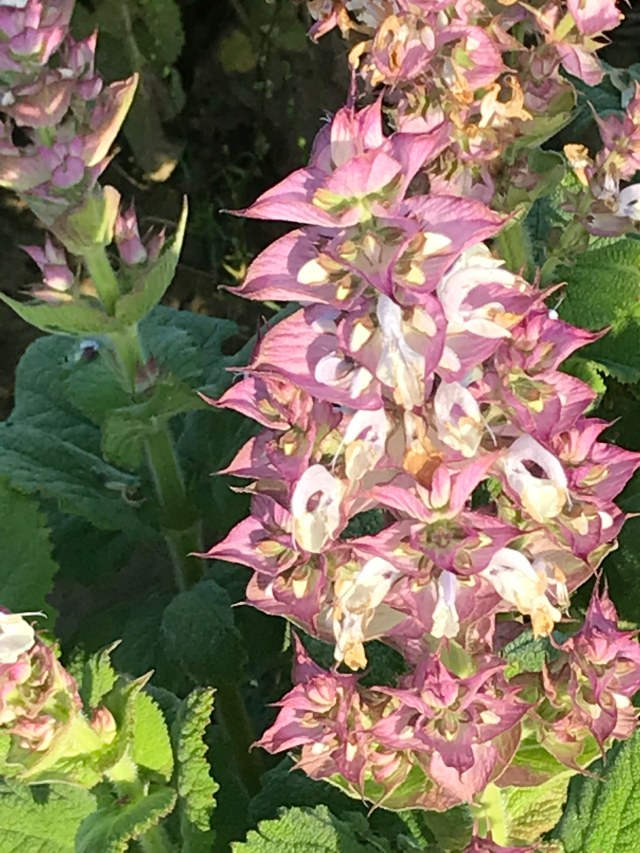 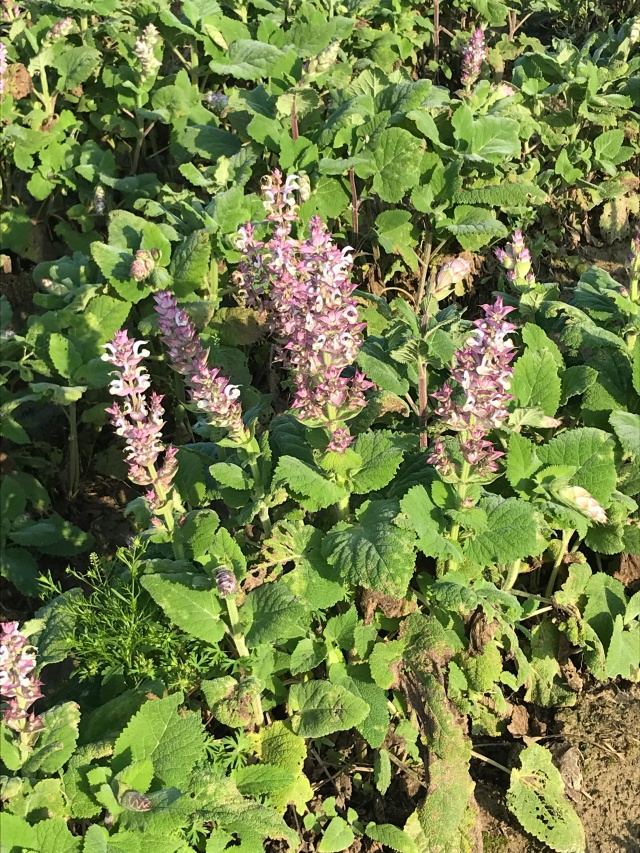 I grew up in Old Town Maine and got a B.S. at the University of Maine in Plant Sciences/ minor in Botany. From there I moved to West Virginia and earned a M.S. in Agronomy at WVU. I also met my wife there. She grew up in rural WV as the daughter of tenant farmers who raised cattle and hogs. Their lifestyle at times was one of subsistence and I learned a lot from them. I've always been a foraging buff, but combining my formal botanical knowledge with their practical 'Foxfire-type' background opened up my eyes a little more. I recently retired from teaching high school agriculture after 25 years teaching with my wife. Until recently I wrote a weekly nature/foraging column for the local paper (dailyadvance.com). I also have written several Christian nature/adventure novels that can be purchased on Amazon in Kindle format. One is a five book family saga I call the 'Forgotten Virtues' series. In the first book, Never Alone (presently out of print), a young boy comes of age after his father dies in a plane crash, and he has to make it alone. The second book, Strange Courage, takes Carl from his High School graduation to his recovery from a nasty divorce. The third book, Second Chances, takes Carl from his ex-wife's death and the custody of his son to his heroic death at age 59. The fourth book, Promises Kept, depicts how his grandchildren react and adjust to his death (this one is not yet published). In the final book, Grandfather's Way, his youngest and most timid granddaughter emerges from the shadow of her overachieving family and accomplishes more in four months than most do in a lifetime. I use many foraging references with a lot of the plants I profile in these articles in those books. I also wrote a romance novel titled Virginia. It is available on Amazon and is a different type of romance from a man's perspective.
View all posts by tedmanzer →
This entry was posted in foraging and tagged aroma enhancer, aromatherapy, biennial, clary sage, flavor enhancer, good drainage, medicinal herb, pink to purple blooms, Salvia sclarea, sandy soils, slareol, tolerates drought. Bookmark the permalink.