Homemade sauerkraut is hard to beat

Local cabbage fields are nearing harvest or have already been cut. Many would have been harvested sooner  if fields hadn’t been so wet. I always look forward to fresh cabbage. It’s so versatile.

One of my favorite cabbage dishes is sauerkraut. My mother-in-law made the best I’ve ever tasted. Elloise Minney passed nine years ago, but I can still taste her kraut. She used an old-fashioned wood framed kraut cutter to slice it just the right thickness.

Sauerkraut is easy to make. I’ve made it myself, but there was always something special about hers. Maybe it was her crock, the coarseness of the cut or the temperature of her cellar. I don’t know, but her kraut was spectacular.

She used a large stone crock, stuffed it with sliced cabbage, salted it by layers and mixed it thoroughly. She inserted a large thoroughly washed smooth stone to pack the cabbage down and keep it submerged. Then she placed a board on the crock with another stone to hold it down.

Eventually, she packed it into jars and stored it in her cellar house. She always seemed to know precisely how long to wait before storing it in jars, and she made sure the jars were not sealed. This would have been difficult anyway, as gas is produced that would break the seal. Somehow, she could tell when it was ready by consistency alone.

This cabbage delight cures by a process called lactofermentation. Lactobacillus bacteria, the same or very similar ones contained in milk and yogurt, convert natural sugars into lactic acid. Lactic acid is the substance that keeps the stuff from spoiling. It also helps give it its incredible tart flavor.

Elloise was always careful to keep all her equipment clean. This keeps competing bacteria and fungi from entering the mix. She didn’t use gloves, but she always was careful to wash her hands thoroughly. Other than that, the fermentation process is simple.

No other ingredients need to be added other than the pickling salt, which contains no iodine. The salt draws moisture from the cabbage. No water or vinegar is usually required for the fermentation process.

If cabbage has dried some it’s sometimes necessary to add salted water to the mix, but this is rarely necessary. Usually the cabbage is reconstituted in the washing process.

I think what made her kraut so good was that it wasn’t processed. Some folks can their kraut after it has fermented, thinking it will last longer. It might, but the final product loses flavor and the texture isn’t as crisp.

Sauerkraut not only tastes good, it’s good for you. A cup has less than 30 calories. Product that has not been processed contains probiotics that promote healthy digestion. Beneficial bacteria can also help us if we must use certain antibiotics to treat infection. Probiotic bacteria in kraut re-establish in our digestive systems.

Kielbasa and kraut is a delicacy I often crave. Unfortunately, it’s just not the same when using store-bought kraut. This cabbage delicacy is also great on hot dogs, brats or eastern barbecue. Don’t knock it until you’ve tried it. 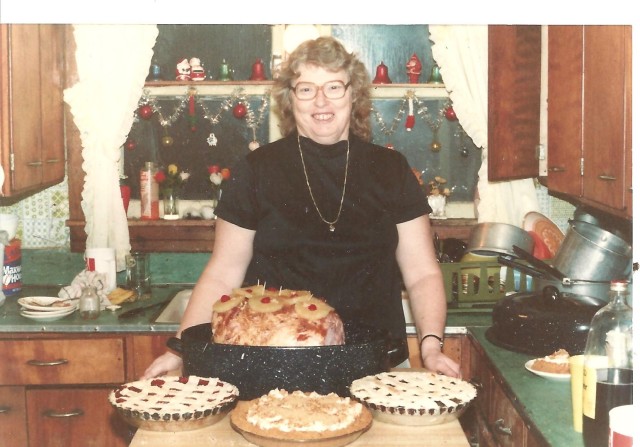 Elloise Minney in her kitchen 34 years ago

I grew up in Old Town Maine and got a B.S. at the University of Maine in Plant Sciences/ minor in Botany. From there I moved to West Virginia and earned a M.S. in Agronomy at WVU. I also met my wife there. She grew up in rural WV as the daughter of tenant farmers who raised cattle and hogs. Their lifestyle at times was one of subsistence and I learned a lot from them. I've always been a foraging buff, but combining my formal botanical knowledge with their practical 'Foxfire-type' background opened up my eyes a little more. I recently retired from teaching high school agriculture after 25 years teaching with my wife. Until recently I wrote a weekly nature/foraging column for the local paper (dailyadvance.com). I also have written several Christian nature/adventure novels that can be purchased on Amazon in Kindle format. One is a five book family saga I call the 'Forgotten Virtues' series. In the first book, Never Alone (presently out of print), a young boy comes of age after his father dies in a plane crash, and he has to make it alone. The second book, Strange Courage, takes Carl from his High School graduation to his recovery from a nasty divorce. The third book, Second Chances, takes Carl from his ex-wife's death and the custody of his son to his heroic death at age 59. The fourth book, Promises Kept, depicts how his grandchildren react and adjust to his death (this one is not yet published). In the final book, Grandfather's Way, his youngest and most timid granddaughter emerges from the shadow of her overachieving family and accomplishes more in four months than most do in a lifetime. I use many foraging references with a lot of the plants I profile in these articles in those books. I also wrote a romance novel titled Virginia. It is available on Amazon and is a different type of romance from a man's perspective.
View all posts by tedmanzer →
This entry was posted in general nature and tagged cabbage, cellarhouse, lactic acid, lactofermentation, pickling salt, sauerkraut, stone crock, washed smooth stone. Bookmark the permalink.

1 Response to Homemade sauerkraut is hard to beat