Oyster mushrooms are a common fungus on deciduous trees

A friend of mine brought in a mushroom sample recently for me to identify. I smiled when I saw it. When I was a teenager, it was one of my favorites to collect. My dad and I usually found it on dead or dying elm trees.

It’s called oyster mushroom (Pleurotus ostreastus) and it’s one of the most abundant in North America. These mushrooms are tree rotting fungi, but they don’t kill healthy trees. Usually trees are already stressed and dying before oyster mushroom spores invade them.

These fungi are saprophytic. That means they break down tissue that is already dead. Parasitic species attack living tissue.

I have been hesitant to write about collecting wild mushrooms for fear I might encourage someone to partake some without proper training. Many edible species are abundant, but so are many questionable ones. One mistake is all it takes to stumble into a disaster.

Even this oyster mushroom has one lookalike that could pose a problem for mycological newbies. It’s called the angel wing mushroom (Pleurocybella porrigens) and it grows strictly on pines and related conifers. Both these mushrooms have a clam-shell appearance. Angel wing fruiting bodies are white with a white spore print. Oyster mushrooms are cream colored to tan, also with a white spore print.

Angel wing fungi have much thinner flesh than oyster mushrooms do. They also have very little odor. Some mycologists describe oyster mushroom scent as anise-like. I think they have a seafood smell when raw. That’s why I always thought they were called oyster mushrooms. Most literature reports their overall physical appearance to be oyster-like, and that’s the reason for the name.

Oyster mushrooms and angel wing mushrooms both have what we call gills (lamellae) on their lower sides. Gills are parallel slits on the undersides of the fleshy caps. Both also don’t have a true stem-like structure called a stipe. Parallel gills run the entire length of the cap on both.

I like to collect oyster mushrooms for several reasons. Usually they can be found in great abundance. A bushel or more on a single tree is not uncommon. They have nice flavor and freeze and can well. I think they are too thick fleshed to make good drying mushrooms. My experience is that once dried they become leathery.

They are best if cooked. Raw ones are too chewy. I sauté them in butter or olive oil and season them with a little salt and garlic. According to many sources they are a rich source of antioxidants and even contain chemicals that reduce bad blood cholesterol. Research also indicates blood glucose levels can be reduced by this fungus.

Except for the angel wing mushroom, I can’t think of anything else that resembles oyster mushrooms. Oysters only grow on deciduous trees. Around here we find them mostly on beech, cottonwood and sweetgum. They are sometimes spotted on oak, hickory and other hardwoods.

As with any type of food, even if you trust the source don’t ever eat much the first time. Some people have no reaction while others could get quite sick. Mushrooms especially are nothing to play with. Always confirm the identification with an expert or maybe two. 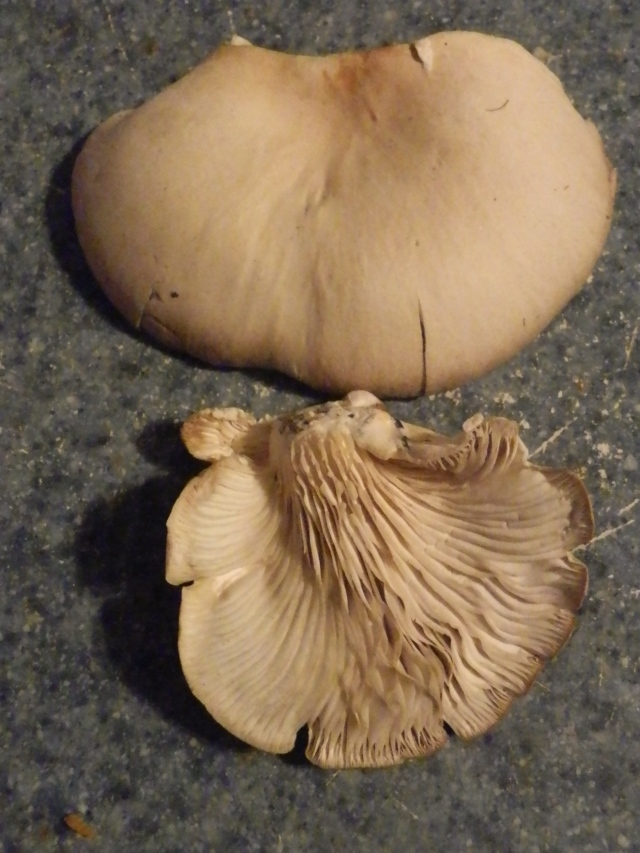 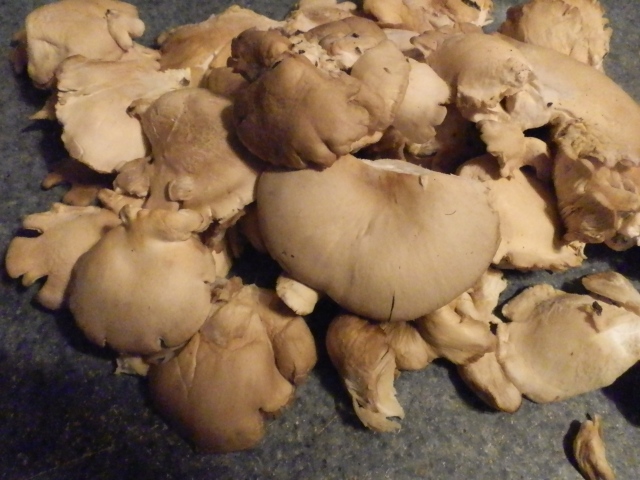 A nice mess of oyster mushrooms 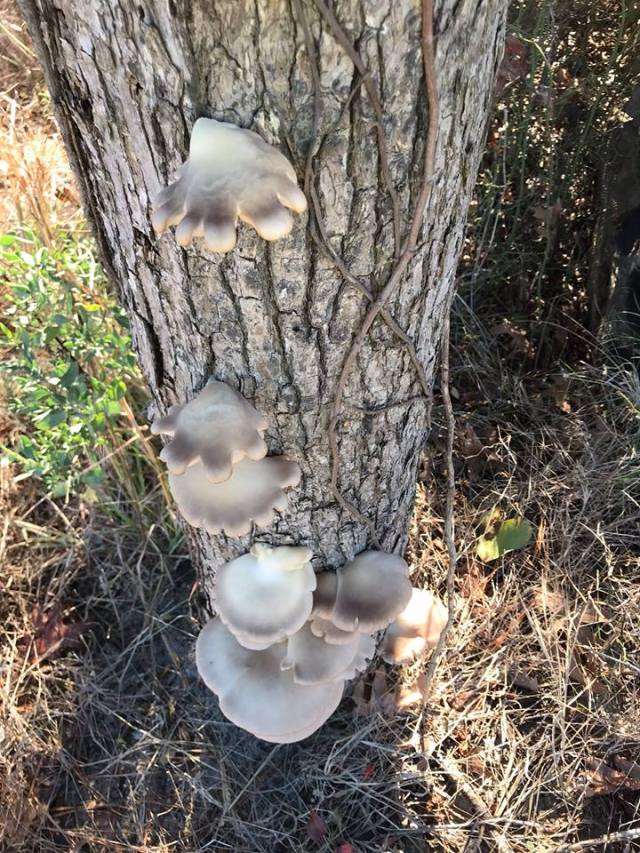 I grew up in Old Town Maine and got a B.S. at the University of Maine in Plant Sciences/ minor in Botany. From there I moved to West Virginia and earned a M.S. in Agronomy at WVU. I also met my wife there. She grew up in rural WV as the daughter of tenant farmers who raised cattle and hogs. Their lifestyle at times was one of subsistence and I learned a lot from them. I've always been a foraging buff, but combining my formal botanical knowledge with their practical 'Foxfire-type' background opened up my eyes a little more. I recently retired from teaching high school agriculture after 25 years teaching with my wife. Until recently I wrote a weekly nature/foraging column for the local paper (dailyadvance.com). I also have written several Christian nature/adventure novels that can be purchased on Amazon in Kindle format. One is a five book family saga I call the 'Forgotten Virtues' series. In the first book, Never Alone (presently out of print), a young boy comes of age after his father dies in a plane crash, and he has to make it alone. The second book, Strange Courage, takes Carl from his High School graduation to his recovery from a nasty divorce. The third book, Second Chances, takes Carl from his ex-wife's death and the custody of his son to his heroic death at age 59. The fourth book, Promises Kept, depicts how his grandchildren react and adjust to his death (this one is not yet published). In the final book, Grandfather's Way, his youngest and most timid granddaughter emerges from the shadow of her overachieving family and accomplishes more in four months than most do in a lifetime. I use many foraging references with a lot of the plants I profile in these articles in those books. I also wrote a romance novel titled Virginia. It is available on Amazon and is a different type of romance from a man's perspective.
View all posts by tedmanzer →
This entry was posted in foraging and tagged angel wing mushroom, dead or dying hardwoods, edible, mycology, no stipe, oyster mushroom, parallel gills, Pleurocybella porrigens, Pleurotus ostreatus, prolific, questionable fungus, white spore print. Bookmark the permalink.