I wish I had more time to spend on and around the water. I love to watch the ospreys patrol the skies in search of fish. Some people call them sea-eagles or sea-hawks. In many places, ospreys can only be observed during certain parts of the year, but here in eastern North Carolina they live here year-round.

Forty years ago, sighting an osprey was rare. They faced the same decline as the bald eagle and many other predatory birds. Certain pesticides didn’t break down in the environment very fast. DDT is the one everyone talks about, but there were others.

These chemicals accumulated in the bodies of animals. Those at the top of the food chain became the most contaminated because of a phenomenon called biomagnification. Plants and insects were sprayed and whatever ate them also absorbed the poison. Animals couldn’t rid themselves of these toxins, which became more concentrated. The same thing happened with mercury levels of swordfish and other apex predators in the ocean.

Since about 1970 we have done a much better job reducing chemical contamination of our environment. Eliminating lead in gasoline means there is now far less lead in our air and waterways.

Pesticides and other chemicals never really killed many ospreys. They caused females to lay eggs with thinner eggshells, and the birds were unable to roll and incubate the eggs without breaking them. Therefore, reproduction suffered greatly.

I’m glad their populations have recovered. It’s fun to watch them. These raptors can fly at speeds as fast as 80 miles per hour. They wait until all odds are in their favor. Then they do their thing.

Ospreys are efficient fishermen. Ask any aquaculture farmer and they will tell you that ospreys can steal profits in a hurry. Killing them isn’t an option as they are protected. Harassing them or interfering with their nests isn’t allowed either.

When ospreys catch fish, they position their prey facing forward for better aerodynamics. This is important as these birds carry large payloads for their size. Ospreys look larger, but adults only weigh about three pounds.

Ospreys nest in large elevated open places near water. They build structures bird watchers can monitor with ease. Both males and females help build nests from sticks. They line them with finer materials.

Parents use the same nests year after year and fortify them with more material. After several years these structures become massive. Sometimes nests are constructed at the tops of large dead trees, but utility poles and other man-made structures become the basic framework for many osprey nests.

Females usually lay three eggs which hatch in five to six weeks. Sometimes males help incubate them. Once the eggs hatch, males bring fish back to the nest. Young birds stay in the nest with their mother for about two months.

Older hatchlings usually bully the younger ones when food is scarce. Often, only the first hatched egg survives. Ospreys only hatch one brood per year, so a productive nesting site is critical for survival of the young. Ospreys are long-lived birds and usually breed for about ten years. 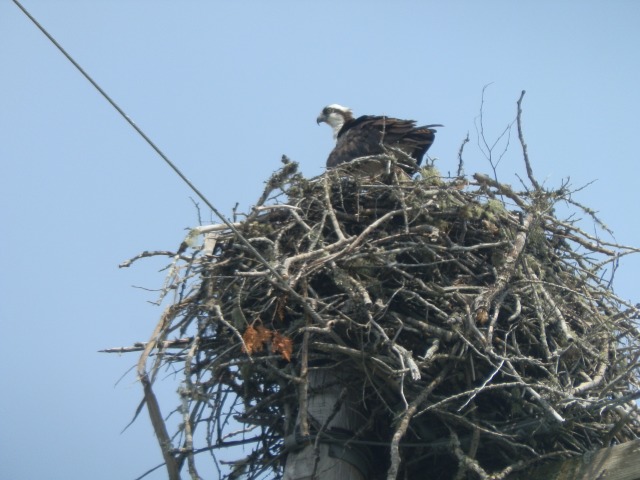 I grew up in Old Town Maine and got a B.S. at the University of Maine in Plant Sciences/ minor in Botany. From there I moved to West Virginia and earned a M.S. in Agronomy at WVU. I also met my wife there. She grew up in rural WV as the daughter of tenant farmers who raised cattle and hogs. Their lifestyle at times was one of subsistence and I learned a lot from them. I've always been a foraging buff, but combining my formal botanical knowledge with their practical 'Foxfire-type' background opened up my eyes a little more. I now teach agriculture to high school students at Northeastern High School in Elizabeth City, NC. My wife teaches with me and we make a great team. I also write a weekly nature/foraging column for the local paper (dailyadvance.com). I also have written several Christian nature/adventure novels that I plan to publish eventually. One is a five book family saga I call the 'Forgotten Virtues' series. In the first book, Never Alone, a young boy comes of age after his father dies in a plane crash, and he has to make it alone. Never Alone is now available in paperback, Kindle and Nook. The second book, Strange Courage, takes Carl from his High School graduation to his recovery from a nasty divorce. The third book, Second Chances, takes Carl from his ex-wife's death and the custody of his son to his heroic death at age 59. The fourth book, Promises Kept, depicts how his grandchildren react and adjust to his death. In the final book, Grandfather's Way, his youngest and most timid granddaughter emerges from the shadow of her overachieving family and accomplishes more in four months than most do in a lifetime. I use many foraging references with a lot of the plants I profile in these articles in those books.
View all posts by tedmanzer →
This entry was posted in general nature and tagged aerodynamics, biomagnification, fishermen, long lived birds, massive nests, Osprey, predatory birds, raptors. Bookmark the permalink.

2 Responses to Ospreys might be the greatest of all fishermen