Jimsonweed is another poisonous plant in the potato family

Last week I wrote about angel trumpet, an ornamental plant in the potato family. Jimsonweed (Datura stramonium) is a very close relative and a weedy plant some people think is attractive enough to be used that way. In fact, numerous nurseries sell it.

It has similar looking flowers to angel trumpet, but they are smaller. Plants can achieve heights of five feet and have large pointed edged leaves. Most varieties used ornamentally are much shorter.

Spiny seed pods look like horse chestnuts and can contain 500 or more bean-shaped black seeds. Each plant produces numerous pods. When these pods dry and split, seeds can be thrown ten feet or more. Seed production is part of the reason this plant is a noxious weed.

Jimsonweed is an annual plant, so producing seeds is crucial for its invasiveness. To make matters worse, seeds can remain dormant in the soil for decades without losing viability. Also, plants occasionally will be perennial in our zone 8 climate, so that’s another reason they are a great concern in the southern US.

A further reason we dread jimsonweed is that it is extremely toxic. All parts of the plant are poisonous. That’s a big problem when children spot them since foliage, flowers and seed pods are so intriguing. Additionally, plants have a bad and well-deserved reputation for misuse.

Another name for jimsonweed is devil’s snare, because of its toxicity. Several alkaloids including atropine are present in significant amounts. Atropine is a strong nerve agent, and misuse often means death.

This is a compound that should only be administered by professionals in known quantities. Concentration in plants can vary tremendously, so this is not a plant to play doctor with.

Jimsonweed also is a concern in wheat and soybean fields, as seeds could wind up mixed with the crop seed. Even small amounts mixed in livestock feed can be problematic, so controlling it is essential. Identifying the seed is a skill that farmers should develop, especially if they grow crops for seed.

Most livestock generally avoid eating jimsonweed plants in pastures, but when pasture growth is limited, they sometimes are forced to consume it. If plants wind up in hay, the likelihood animals might eat some is even greater.

In a vegetable or flower garden, jimsonweed can be controlled by cultivation. The only concern is ridding the area of it before plants go to seed. That shouldn’t be too difficult as the plant is so conspicuous.

On a large scale, controlling this weed chemically is the only way. Many herbicides effective against broadleaf plants can be used to kill jimsonweed. Pre-emergent chemicals are also a good choice, especially in field crops like soybeans, wheat and corn.

This is a plant I often contemplated writing about since it is so common. I was always hesitant, because of my concern about people experimenting with it.

Toxicity among individual plant specimens varies tremendously, and that makes jimsonweed especially dangerous if consumed by any manner. Avoid even touching this plant without washing your hands afterward. I’m serious. 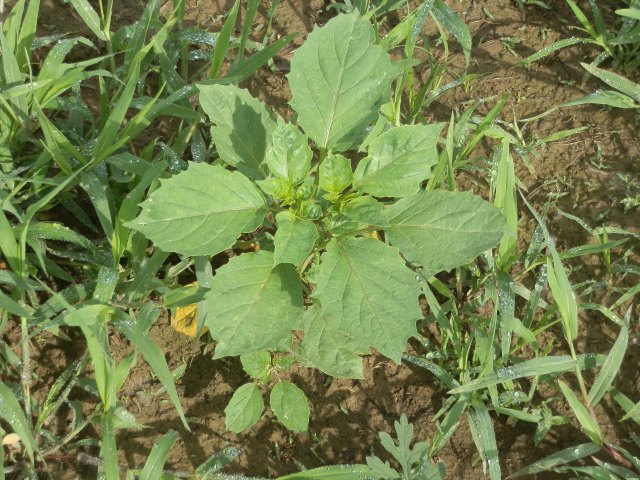 I grew up in Old Town Maine and got a B.S. at the University of Maine in Plant Sciences/ minor in Botany. From there I moved to West Virginia and earned a M.S. in Agronomy at WVU. I also met my wife there. She grew up in rural WV as the daughter of tenant farmers who raised cattle and hogs. Their lifestyle at times was one of subsistence and I learned a lot from them. I've always been a foraging buff, but combining my formal botanical knowledge with their practical 'Foxfire-type' background opened up my eyes a little more. I now teach agriculture to high school students at Northeastern High School in Elizabeth City, NC. My wife teaches with me and we make a great team. I also write a weekly nature/foraging column for the local paper (dailyadvance.com). I also have written several Christian nature/adventure novels that I plan to publish eventually. One is a five book family saga I call the 'Forgotten Virtues' series. In the first book, Never Alone, a young boy comes of age after his father dies in a plane crash, and he has to make it alone. Never Alone is now available in paperback, Kindle and Nook. The second book, Strange Courage, takes Carl from his High School graduation to his recovery from a nasty divorce. The third book, Second Chances, takes Carl from his ex-wife's death and the custody of his son to his heroic death at age 59. The fourth book, Promises Kept, depicts how his grandchildren react and adjust to his death. In the final book, Grandfather's Way, his youngest and most timid granddaughter emerges from the shadow of her overachieving family and accomplishes more in four months than most do in a lifetime. I use many foraging references with a lot of the plants I profile in these articles in those books.
View all posts by tedmanzer →
This entry was posted in Uncategorized and tagged alkaloids, Angel trumpet, annual, atropine, Datura stramonium, devil's snare, jimsonweed, poisonous, potato family, southern US, spiny seed pod, weedy plant. Bookmark the permalink.