Sunflowers are a symbol of summer

We don’t grow many sunflowers commercially in this part of the country, but they are one of our most recognizable flowers. Many folks grow them on a small scale. There are so many reasons to grow sunflowers. They are beautiful, birds love them, they have medicinal qualities and they’re edible.

Sunflowers are easy to grow. They aren’t fussy about soil type but don’t thrive in wet acid soil. They require full sun and grow well in hot weather. They also benefit from high fertility. Sometimes it’s good to fertilize sunflowers frequently if soils are very sandy.

The only real problem growing these flowers is that birds will sometimes dig out seeds before they germinate. Deer eat them too. In our area, sunflowers have few insect problems except in the fall, when grasshoppers can defoliate them. Our high humidity often makes plants susceptible to powdery mildew.

Sunflowers are interesting in that their flowers turn in response to the direction of the sun. They certainly aren’t the only plant to do this, but since flowers are large it’s very noticeable.

Sunflower fans know that there are different types to choose from. There are tall sunflowers, short ones, plants with large solitary blooms and plants with many smaller ones. Most sunflowers are yellow to orange with a dark brown to black center. However, they can be a multitude of colors.

There are basically two types of sunflower seeds. Confection seeds are the large striped ones commonly packaged for human snack food and are often eaten at sporting events. There are multitudes of the smaller oilseed types. These are often a major component of wild bird mixes. They are also used to make sunflower seed oil we buy in grocery stores.

Sunflower seeds continue to gain popularity. They have twice the protein of walnuts or pecans and they are very high in Vitamin E. They are also high in fiber and low in carbohydrates. They also are an option for people allergic to tree nuts or peanuts.

Seeds aren’t the only part of the sunflower that’s edible. People can cook and eat the leaves, and the flower petals make a great tea and are colorful on a salad. Too many can make the salad a little bitter.

Sunflowers also have a history as medicinal plants. They have been used for sore throats and to treat arthritis. Sunflower oil has even been used to treat athlete’s foot.

The main reason most people grow sunflowers is that they’re pretty, dramatic, and they attract birds and other wildlife. Sunflowers can provide incredible color. That’s probably one reason why so many children are fascinated by them. Seed heads are easy to dry and save for bird feeders.

Sunflowers also are versatile in that they can be cut and used in flower arrangements. Blooms often last for a week. The yellow to orange types seem to last longer in a vase than do many of the other colors.

I love seeing them along the roadsides. I wish folks planted more of them. Summer just isn’t summer without sunflowers. 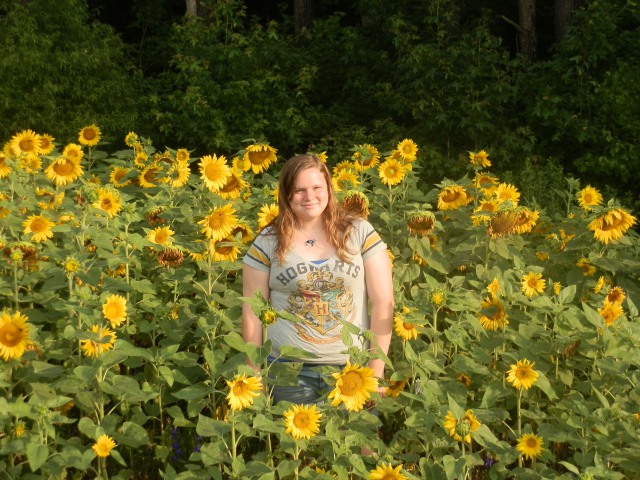 Sunflowers are a familiar sign of summer. This is my daughter, the Horticulture Extension Agent for Pasquotank County North Carolina. The picture was taken back in 2013.

I grew up in Old Town Maine and got a B.S. at the University of Maine in Plant Sciences/ minor in Botany. From there I moved to West Virginia and earned a M.S. in Agronomy at WVU. I also met my wife there. She grew up in rural WV as the daughter of tenant farmers who raised cattle and hogs. Their lifestyle at times was one of subsistence and I learned a lot from them. I've always been a foraging buff, but combining my formal botanical knowledge with their practical 'Foxfire-type' background opened up my eyes a little more. I now teach agriculture to high school students at Northeastern High School in Elizabeth City, NC. My wife teaches with me and we make a great team. I also write a weekly nature/foraging column for the local paper (dailyadvance.com). I also have written several Christian nature/adventure novels that I plan to publish eventually. One is a five book family saga I call the 'Forgotten Virtues' series. In the first book, Never Alone, a young boy comes of age after his father dies in a plane crash, and he has to make it alone. Never Alone is now available in paperback, Kindle and Nook. The second book, Strange Courage, takes Carl from his High School graduation to his recovery from a nasty divorce. The third book, Second Chances, takes Carl from his ex-wife's death and the custody of his son to his heroic death at age 59. The fourth book, Promises Kept, depicts how his grandchildren react and adjust to his death. In the final book, Grandfather's Way, his youngest and most timid granddaughter emerges from the shadow of her overachieving family and accomplishes more in four months than most do in a lifetime. I use many foraging references with a lot of the plants I profile in these articles in those books.
View all posts by tedmanzer →
This entry was posted in Uncategorized and tagged composite flowers, confection seed, cut flower arrangements, drought tolerant, full sun, high fertility, hot weather, oil seed, sunflowers, Vitamin E. Bookmark the permalink.

1 Response to Sunflowers are a symbol of summer