Giant puffballs are common and nearly impossible to misidentify

Those who know me know I’m paranoid about leading foragers astray, especially mushroom hunters. Recently, someone asked me to identify a picture of a mushroom in her yard, and it was a giant puffball (Calvatia gigantea) They’re common this time of year. They’re also edible when young.

These fungi live on dead plant material. Usually, we find them in the same place each year. This is likely because of the increased spore concentration in that area along with the food source of dead material.

Some mycologists suggest the mushrooms might also form relationships with living plants.  These associations are called mycorrhizal, where the plant helps the fungus and the fungus helps the plant.

This fungus is truly gigantic. I’ve seen some bigger than basketballs, and they grow very fast. If you’re thinking about cooking one, simply cut it open. If the inside is white and firm but slightly spongy, brush the mushroom off and slice it up. Don’t soak them in water to clean them or texture will suffer.

There are many ways folks eat them. Some like them sautéed in butter or olive oil. Others bread them first. I don’t bother with them anymore since I’m not crazy about their flavor. Mixed with other things in a stir fry they’re fine, but when cooked alone I’m always disappointed. I’ve read that they can be substituted for eggplant in certain recipes, but I’m not a big eggplant fan either.

If the inside shows even a slight bit of dark color, look for another specimen. Taste and texture will be a major disappointment, but they’re still not poisonous.

When cutting one open, if you see anything but uniform homogenous tissue, throw it away. There are a few poisonous Amanita mushrooms that could fool you when puffballs are extremely young. Once these things are several inches across, nothing can be confused with them. Avoid little ones.

These mushrooms are best if eaten fresh. They can be dried, but they get leathery when reconstituted. I’ve never tried canning or pickling them, but I assume they would retain their texture in the brine solution. Freezing puffballs is not an option as they get soft and mushy when thawed. I tried that once years ago.

Once these fungi mature, they dry up and the entire inside becomes a mass of black powdery spores. There can be several trillion spores in a single fruiting body.

These spores have styptic properties, meaning that they can slow or stop bleeding. Spores can be collected and stored in an airtight container to be used on wounds. The spores won’t germinate and grow fungi on you. People with allergies to dust and pollen might be affected if too many of these spores are inhaled.

Like all fungi, puffballs grow and develop quickly. Depending upon the weather, their fruiting stage can last as little as a few days and their prime edibility can be less than a day. If the temperature turns cool, their metabolism slows, and they persist longer. Sometimes they can last in the fridge for several days. 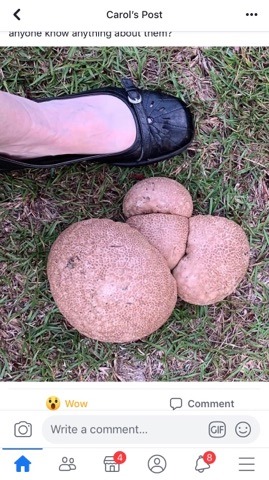 I grew up in Old Town Maine and got a B.S. at the University of Maine in Plant Sciences/ minor in Botany. From there I moved to West Virginia and earned a M.S. in Agronomy at WVU. I also met my wife there. She grew up in rural WV as the daughter of tenant farmers who raised cattle and hogs. Their lifestyle at times was one of subsistence and I learned a lot from them. I've always been a foraging buff, but combining my formal botanical knowledge with their practical 'Foxfire-type' background opened up my eyes a little more. I now teach agriculture to high school students at Northeastern High School in Elizabeth City, NC. My wife teaches with me and we make a great team. I also write a weekly nature/foraging column for the local paper (dailyadvance.com). I also have written several Christian nature/adventure novels that I plan to publish eventually. One is a five book family saga I call the 'Forgotten Virtues' series. In the first book, Never Alone, a young boy comes of age after his father dies in a plane crash, and he has to make it alone. Never Alone is now available in paperback, Kindle and Nook. The second book, Strange Courage, takes Carl from his High School graduation to his recovery from a nasty divorce. The third book, Second Chances, takes Carl from his ex-wife's death and the custody of his son to his heroic death at age 59. The fourth book, Promises Kept, depicts how his grandchildren react and adjust to his death. In the final book, Grandfather's Way, his youngest and most timid granddaughter emerges from the shadow of her overachieving family and accomplishes more in four months than most do in a lifetime. I use many foraging references with a lot of the plants I profile in these articles in those books.
View all posts by tedmanzer →
This entry was posted in foraging and tagged bigger than basketballs, Calvatia gigantea, eggplant substitute, Giant puffballs, live on dead plant material, possibly mycorrhizal, styptic properties, trillions of spores. Bookmark the permalink.