Leyland cypress is the mule of landscape material

We all know what a mule is. It’s a cross between a female horse (Equus caballus) and a male donkey (Equus asinus). Since the parents are different species the mule is sterile.

So, what does that all really mean? For one thing, this plant could never become invasive, because it doesn’t produce viable seeds. That’s one of its good points. Unfortunately, it probably has more bad traits than good ones.

Leyland cypress is fast growing. That can be good if the desired effect is developing a screen in a hurry. Many people use this plant as a windbreak because it grows quickly. Unfortunately, like most fast-growing species it has a shallow root system and plants often blow over.

Another problem is that most people look at Leyland cypresses as large shrubs and plant them too close together. These things can get over 60 feet tall. When planted close together they grow spindly and are even more subject to toppling over.

It’s easy to see why landscapers and homeowners like them. They have attractive bluish-green color, and they grow quickly. Even small specimens can make an impact in a short time. They also are used a lot in coastal areas, since they’re quite resistant to salt spray.

Leylands thrive in a wide variety of soils but won’t tolerate extremely dry or extremely wet environments for very long. Here in the southeast, those conditions can be common and last several weeks. When plants become stressed, they are susceptible to diseases and insects.

Bagworms are a major problem around here. If I need to find samples for teaching purposes, I can always find some. Older trees in dense plantings seem to be the most susceptible. Once bagworms become established it’s only a matter of time before all trees in the planting are affected and ruined. Spider mites can be problematic, too.

I like the idea of using these trees as a screen, but I would consider them a short-term screen. I’d plant a slower-growing, deeper-rooted and more disease and insect resistant species between them with the idea of removing the Leylands in a few years. That way I’d have privacy over a longer period.

In recent years, Leyland cypresses have become popular as Christmas trees. They respond well to frequent pruning and can be shaped quite easily. Branches don’t have the strength of firs, spruces or scots pine, and they don’t have traditional needles, but the crop can be marketable at a younger age.

My attitude toward this species is far less negative as it is toward the ornamental pears. They are a true scourge of the earth. I think Leyland cypress has some fine qualities. It’s not invasive, but it’s overused. We need to be more imaginative. There are many more evergreens at our disposal. 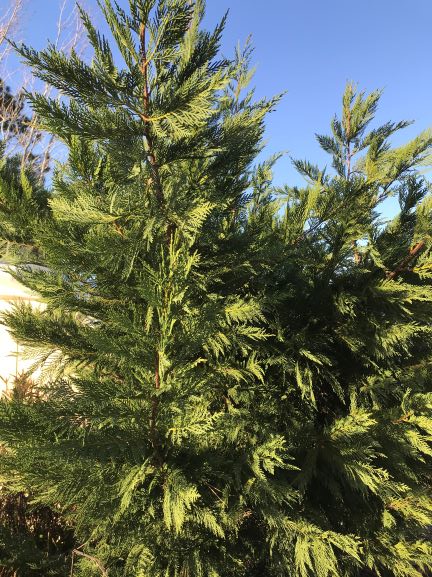 Leyland cypresses are readily available and easy to grow

I grew up in Old Town Maine and got a B.S. at the University of Maine in Plant Sciences/ minor in Botany. From there I moved to West Virginia and earned a M.S. in Agronomy at WVU. I also met my wife there. She grew up in rural WV as the daughter of tenant farmers who raised cattle and hogs. Their lifestyle at times was one of subsistence and I learned a lot from them. I've always been a foraging buff, but combining my formal botanical knowledge with their practical 'Foxfire-type' background opened up my eyes a little more. I recently retired from teaching high school agriculture after 25 years teaching with my wife. Until recently I wrote a weekly nature/foraging column for the local paper (dailyadvance.com). I also have written several Christian nature/adventure novels that can be purchased on Amazon in Kindle format. One is a five book family saga I call the 'Forgotten Virtues' series. In the first book, Never Alone (presently out of print), a young boy comes of age after his father dies in a plane crash, and he has to make it alone. The second book, Strange Courage, takes Carl from his High School graduation to his recovery from a nasty divorce. The third book, Second Chances, takes Carl from his ex-wife's death and the custody of his son to his heroic death at age 59. The fourth book, Promises Kept, depicts how his grandchildren react and adjust to his death (this one is not yet published). In the final book, Grandfather's Way, his youngest and most timid granddaughter emerges from the shadow of her overachieving family and accomplishes more in four months than most do in a lifetime. I use many foraging references with a lot of the plants I profile in these articles in those books. I also wrote a romance novel titled Virginia. It is available on Amazon and is a different type of romance from a man's perspective.
View all posts by tedmanzer →
This entry was posted in general nature and tagged bagworms, Christmas trees, fast growing, inter-generic cross, Leyland Cypress, Monterey cypress, Nootka false cypress, privacy screen, resistant to salt spray, shallow root system, windbreak. Bookmark the permalink.

4 Responses to Leyland cypress is the mule of landscape material