Some plants control the growth of other plants

Some plant species inhibit the growth of others. We’ve all heard people say that certain plants stop others from growing, but is there a scientific basis for it? There is and it’s called allelopathy.

Allelopathy is when plants release chemicals into the environment that are toxic to other plants. It’s a common way for plants to reduce competition near them. Sometimes chemicals reduce feeding by animals and insects. Allelopathic plants discharge chemicals through their leaves, bark, and roots. Most of the time this has a negative connotation.

Black walnut (Juglans nigra) is a tree famous for its allelopathic properties. Many plants simply will not grow near these trees. This has been known for centuries. Most plants in the potato, rose (except for cherries) and cabbage families are sensitive to black walnut allelopathy. Numerous others are too. However, many vegetables like beets, carrots, melons, squash, onions and beans show no effect from the chemical juglone, produced by the black walnut tree.

Plants are naturally competitive, allelopathic or not. The idea that plants work together is not true. Many home gardeners constantly search for a way to make their tomatoes grow better. They read articles that tell them which plants to plant near tomatoes and which ones to keep away.

Allelopathy could enter the equation some, but much of the reason their plants are successful or not depends on the direct competition for water and nutrients. Attracting or repelling certain pests could be reasons, too.

Many folks struggle with growing tomatoes near cabbages. This could be allelopathic or it could be an example of cabbages drawing insect pests, then outcompeting the tomatoes once the pests were present. It’s not clear whether tomatoes not thriving is because of true allelopathy or another environmental factor.

An old-time favorite to plant near tomatoes is the marigold (Tagetes sp.). Marigolds supposedly produce a chemical in their roots that suppresses the root-knot nematode. Marigolds also repel several insects and often it’s insects that transmit viruses and other diseases that destroy tomatoes.

Sometimes plants lose vigor because they have no mycorrhizal fungi on their roots. Mycorrhizae are fungal roots (hyphae)that attach to plant roots and siphon off sugars in exchange for providing plants better mineral nutrient uptake. Some allelopathic chemicals destroy these mycorrhizal fungi. Without this root association, many plants struggle.

In 1928, Scottish scientist Alexander Fleming was researching a possible cure for the influenza virus. What he found instead was that a bread mold produced chemicals that killed bacteria that grew next to it.

Penicillin was the first and even now one of the most widespread antibiotics in use. It’s a classic example of allelopathy, and it has turned out to be a pretty good thing for nearly a hundred years. Therefore, allelopathy is not always bad. 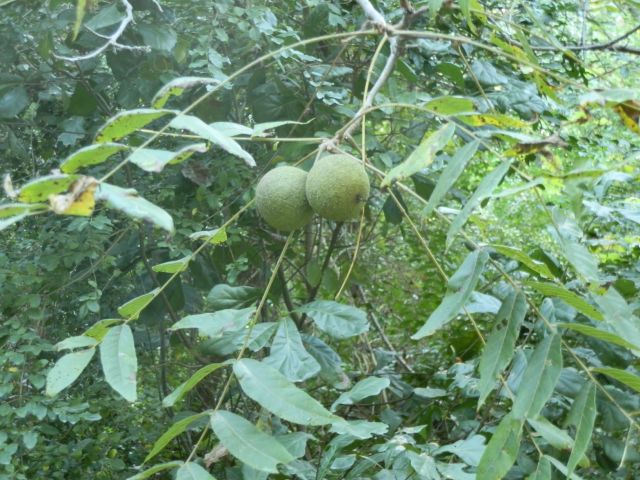 This black walnut tree suppresses many plants but not all

I grew up in Old Town Maine and got a B.S. at the University of Maine in Plant Sciences/ minor in Botany. From there I moved to West Virginia and earned a M.S. in Agronomy at WVU. I also met my wife there. She grew up in rural WV as the daughter of tenant farmers who raised cattle and hogs. Their lifestyle at times was one of subsistence and I learned a lot from them. I've always been a foraging buff, but combining my formal botanical knowledge with their practical 'Foxfire-type' background opened up my eyes a little more. I recently retired from teaching high school agriculture after 25 years teaching with my wife. Until recently I wrote a weekly nature/foraging column for the local paper (dailyadvance.com). I also have written several Christian nature/adventure novels that can be purchased on Amazon in Kindle format. One is a five book family saga I call the 'Forgotten Virtues' series. In the first book, Never Alone (presently out of print), a young boy comes of age after his father dies in a plane crash, and he has to make it alone. The second book, Strange Courage, takes Carl from his High School graduation to his recovery from a nasty divorce. The third book, Second Chances, takes Carl from his ex-wife's death and the custody of his son to his heroic death at age 59. The fourth book, Promises Kept, depicts how his grandchildren react and adjust to his death (this one is not yet published). In the final book, Grandfather's Way, his youngest and most timid granddaughter emerges from the shadow of her overachieving family and accomplishes more in four months than most do in a lifetime. I use many foraging references with a lot of the plants I profile in these articles in those books. I also wrote a romance novel titled Virginia. It is available on Amazon and is a different type of romance from a man's perspective.
View all posts by tedmanzer →
This entry was posted in Uncategorized and tagged allelopathic, allelopathy, Black Walnut, competition, Juglans nigra, juglone, marigold, root-knot nematode. Bookmark the permalink.

1 Response to Some plants control the growth of other plants