Our lawns are starting to green up well. Troublesome weeds are rearing their ugly heads also. Well, depending upon one’s perspective some are quite attractive. The common violet is a prime example. Those bright bluish-purple flowers and heart-shaped leaves would be quite welcome if they weren’t entangled in our grass.

Upon closer look, those showy flowers are rather unique. Many are sterile. Flowers that produce large amounts of seed are little brown inconspicuous ones that never open. Fall is when most of them develop. They usually produce enough seed to populate our lawns and flowerbeds.

The genus Viola is one of the more common genera in the US. Numerous species abound, and many are host to different butterfly larvae. Despite being food for the caterpillars, violet numbers don’t seem to dwindle. Quite the contrary, they spread aggressively. Don’t believe what the classic poets write. Violets are not shy.

Wild violets are perennials less than six inches tall with deep taproots and spreading underground stems called rhizomes. They thrive in cool weather, moist or dry soils, and tolerate sun or shade. Their showy heart-shaped foliage has a waxy layer that sheds water and resists chemicals. Consequently, violets are hard to kill and once established will be a familiar sight.

Repeat applications of herbicide are usually necessary. Still success is far from a guarantee. Most people learn that when declaring war on them. Usually they wind up injuring their turf more than the violets. Furthermore, few chemicals are truly effective against these pesky foes, particularly in native Bermudagrass turf.

Sometimes spot treating with a nonselective chemical like Round-up works. Digging them out is also a possibility, especially in smaller areas. Spring is probably the best time to remove them, but weeding is a lot of work. When mowing, always clean the underside of the deck thoroughly afterwards. This avoids spreading this pest to other parts of your yard.

There can be a bright side. Violets are edible and nutritious. The late Euell Gibbons once referred to them as ‘natures vitamin pill.’ The flowers make a great garnish for salads and cakes. They even make a beautiful and tasty jelly and are also very high in vitamin C. Ascorbic acid content is even higher than in citrus fruits. Leaves and flowers of the violet are considered blood purifiers or detoxifiers.

Violets contain rutin which strengthens the capillaries. Leaves have a taste that is somewhat sweet with a slight peppery bite. They add texture to spring salad and have mucilage that can thicken a soup. Leaves are also a good source of vitamin A. When dried they make a decent tea.

Violets are a diuretic and can lessen some urinary and bladder problems. They are also used in some skin care products. The foliage also contains salicylates, so they can be used as an analgesic.

Pansies are close domestic cousins with many similar properties. Some natural food stores sell their flowers along with nasturtium for people to eat. They’re pricy, so I have other uses for my money. 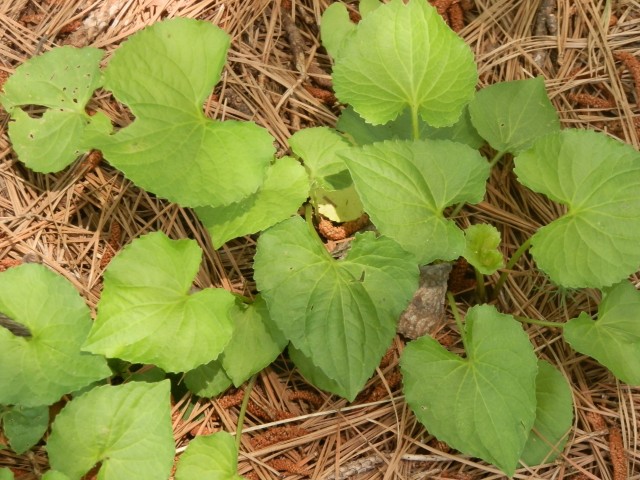 Clump of violets growing on the edge of pines 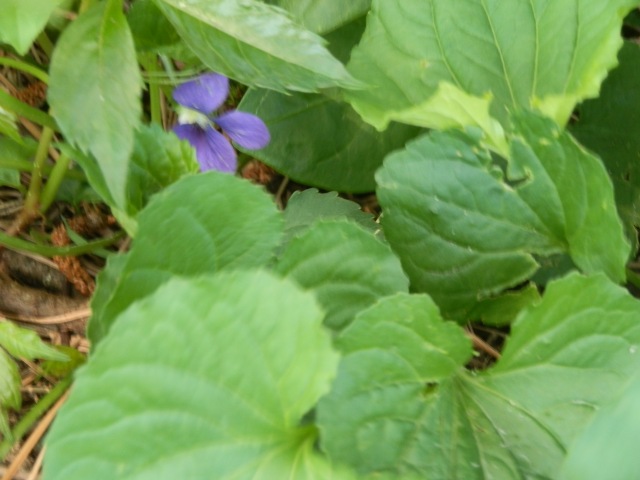 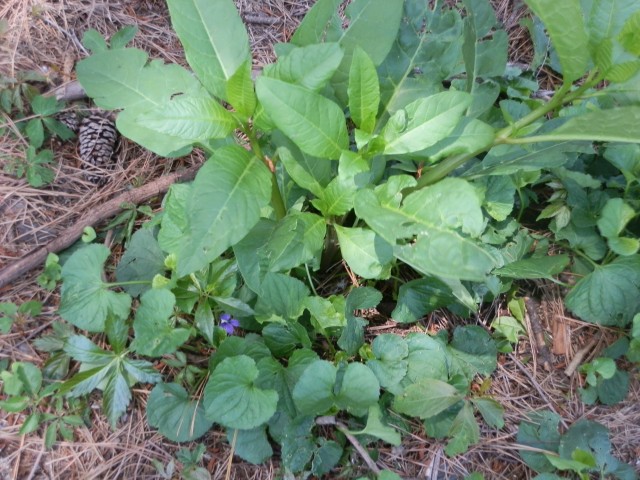 Violets take their place amongst pokeweed and Virginia creeper

I grew up in Old Town Maine and got a B.S. at the University of Maine in Plant Sciences/ minor in Botany. From there I moved to West Virginia and earned a M.S. in Agronomy at WVU. I also met my wife there. She grew up in rural WV as the daughter of tenant farmers who raised cattle and hogs. Their lifestyle at times was one of subsistence and I learned a lot from them. I've always been a foraging buff, but combining my formal botanical knowledge with their practical 'Foxfire-type' background opened up my eyes a little more. I now teach agriculture to high school students at Northeastern High School in Elizabeth City, NC. My wife teaches with me and we make a great team. I also write a weekly nature/foraging column for the local paper (dailyadvance.com). I also have written several Christian nature/adventure novels that I plan to publish eventually. One is a five book family saga I call the 'Forgotten Virtues' series. In the first book, Never Alone, a young boy comes of age after his father dies in a plane crash, and he has to make it alone. Never Alone is now available in paperback, Kindle and Nook. The second book, Strange Courage, takes Carl from his High School graduation to his recovery from a nasty divorce. The third book, Second Chances, takes Carl from his ex-wife's death and the custody of his son to his heroic death at age 59. The fourth book, Promises Kept, depicts how his grandchildren react and adjust to his death. In the final book, Grandfather's Way, his youngest and most timid granddaughter emerges from the shadow of her overachieving family and accomplishes more in four months than most do in a lifetime. I use many foraging references with a lot of the plants I profile in these articles in those books.
View all posts by tedmanzer →
This entry was posted in foraging and tagged diuretic, edible, flowers, foraging, nature, salicylates, Viola, violets, vitamin c. Bookmark the permalink.