Posted on September 2, 2012 by tedmanzer

In northern climates lilac makes a beautiful large shrub to small tree. It has showy cone-like fragrant inflorescences in spring. Lilac struggles in our climate but we have a great alternative in Vitex (Vitex agnus-castus).

Also called chaste tree it has flowers that look somewhere in between a lilac and a butterfly bush. They are also aromatic like lilac. Finger-like foliage has a sage-like aroma and the open airy growth habit makes for a delicate specimen plant.

Vitex, native to the Mediterranean region, blooms a little later in spring and will continue if old flowers are removed. If berries are allowed to develop they resemble peppercorns. Few pests bother Vitex but a fungal leaf spot can often nearly defoliate a tree. This plant also doesn’t tolerate extremely wet soils, but it handles the heat with ease.

So where did the name ‘chaste tree’ come from? As its name implies, its foliage and fruit were thought to reduce sexual desire, and traditionally chewed by monks to make their vows easier to uphold. Another name for the plant is monk’s pepper.

The ancient Greeks also believed the same. Ladies who did not want to be disturbed slept with Vitex leaves to deter any male company. No concrete scientific evidence has been established for these ancient claims, but the legend lives on.

Modern uses abound, however. In Europe, particularly Germany, research is flourishing. Vitex is sometimes called the woman’s herb. It is used for menstrual cycle irregularities, PMS, and menopause symptoms. It is also prescribed for treating fibrocystic breast growths and female infertility.

Chemicals in the plant stimulate the production of luteinizing hormone in the pituitary gland, which boosts levels of progesterone and prolactin. A better progesterone-estrogen balance results. This helps reduce miscarriages and boosts milk production particularly in women with low fertility. Many sources state discontinuing use if already pregnant or nursing, however.

If you are expecting immediate results, you’ll likely be disappointed. It may take several weeks to significantly change hormone levels, but slow change is not always bad. Rapid hormonal changes can be part of the problem in the first place.

Vitex extracts can cause upset stomach, diarrhea, dizziness, dry mouth and skin rashes in some people. Some complain of headaches and insomnia but no serious side-effects have been reported.

Research has shown Vitex use can help treat an enlarged prostate in men. Part of the reason for this condition is a slight shift in testosterone and estrogen balance. Chemicals in Vitex slow conversion of testosterone to estrogen and the result is shrinkage of the prostate.

On the downside, various studies indicate the use of this herb can cause shrinkage of the prostate, which is good, but it can also promote testicular shrinkage, which is not so good. It promotes fertility in women, but impotence and sterility in men. The prostate research is interesting, but for now I think I’ll pass. 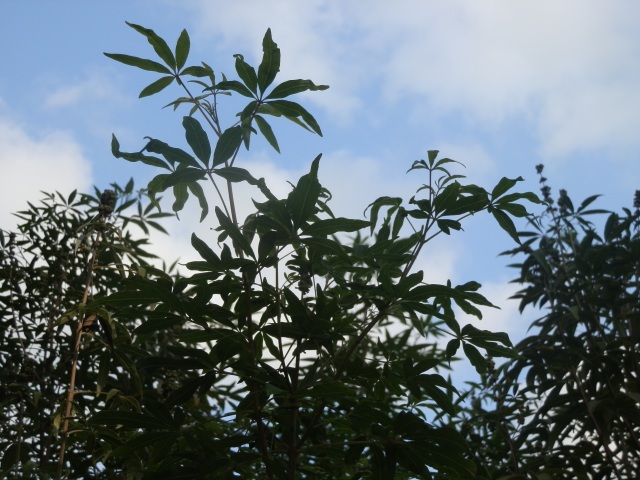 I grew up in Old Town Maine and got a B.S. at the University of Maine in Plant Sciences/ minor in Botany. From there I moved to West Virginia and earned a M.S. in Agronomy at WVU. I also met my wife there. She grew up in rural WV as the daughter of tenant farmers who raised cattle and hogs. Their lifestyle at times was one of subsistence and I learned a lot from them. I've always been a foraging buff, but combining my formal botanical knowledge with their practical 'Foxfire-type' background opened up my eyes a little more. I now teach agriculture to high school students at Northeastern High School in Elizabeth City, NC. My wife teaches with me and we make a great team. I also write a weekly nature/foraging column for the local paper (dailyadvance.com). I also have written several Christian nature/adventure novels that I plan to publish eventually. One is a five book family saga I call the 'Forgotten Virtues' series. In the first book, Never Alone, a young boy comes of age after his father dies in a plane crash, and he has to make it alone. Never Alone is now available in paperback, Kindle and Nook. The second book, Strange Courage, takes Carl from his High School graduation to his recovery from a nasty divorce. The third book, Second Chances, takes Carl from his ex-wife's death and the custody of his son to his heroic death at age 59. The fourth book, Promises Kept, depicts how his grandchildren react and adjust to his death. In the final book, Grandfather's Way, his youngest and most timid granddaughter emerges from the shadow of her overachieving family and accomplishes more in four months than most do in a lifetime. I use many foraging references with a lot of the plants I profile in these articles in those books.
View all posts by tedmanzer →
This entry was posted in foraging and tagged aromatic herb, berries, BPH, Chaste tree, fertility, foraging, medicinal, menopause, Monk's pepper, nature, progesterone-estrogen balance, Vitex, Vitex agnus castus, woman's herb. Bookmark the permalink.