Take a walk on the edge of the woods in the fall, particularly near an old cemetery or abandoned landscape. Your eyes will likely zone in on some iridescent purple to magenta berries. They encircle the stems in clusters and their abundance will impress you.

Beautyberry (Callicarpa americana) is a native shrub not used much these days, but its fall color is as unique as any you’ll see. The fruits really live up to their name.

They grow in full sun to quite shady conditions. Fruiting is more prolific when plants receive adequate sunlight and moisture. Quite often they can be found on the edges of swampy areas. Beautyberries are a low water user and can tolerate drier sites as well.

These deciduous shrubs can grow to eight or nine feet but four feet is more typical. Growth habit is loose and spreading. Plants respond well to pruning and can be kept where you want them. Pruning also makes their growth more dense, which is pleasing to many.

Serrated leaves emerge from the stems in pairs. Fall foliage is yellowish green, but the berries are the real treat to look at.

Squirrels, deer, bobwhite quail and many songbirds love them and can eliminate the gorgeous color in short order. Deer are fond of the foliage as well. Flowers are rich in nectar and attract butterflies.

They can be a culinary treat also. Many people think they are poisonous, but they’re not. When consumed fresh the berries have little taste other than being somewhat astringent and sour.

Cooking changes things. They make a fabulous jelly with a delicate flavor somewhere in between apple and cherry. The color loses some of its vibrancy during processing, but jams and jellies still are a pleasing bright pinkish red.

Odor of crushed foliage is not what I would consider delicate. Beautyberry is related to lantana. Foliage from many lantana cultivars can offend our olfactory nerves and so can beautyberry leaves.

All is not lost, however. Chemicals inside the leaves are highly effective for repelling mosquitoes and biting flies. Research has even shown compounds isolated from beautyberry to be effective in controlling fire ants.

Simply crushing the leaves and rubbing the juice on our skin is safe. It’s probably less dangerous than lathering our skin or our pets with DEET, the active ingredient in most commercial repellants.

I’d say a little bitter smell beats getting eaten up by mosquitoes or ticks. In this slow economy the price is right too.

Researchers at the University of Mississippi are working with this native shrub in hopes of making a buck from it. They have identified three compounds with strong repellant properties. Maybe we’ll see a beautyberry insect repellant on the shelves of our local stores in the future.

Don’t look for it anytime soon. Approving a chemical for use is a tedious process. The EPA has many regulations, meaning it might take several years to get something licensed. In the meantime you can collect your own and maybe enough berries for a batch of homemade jelly. 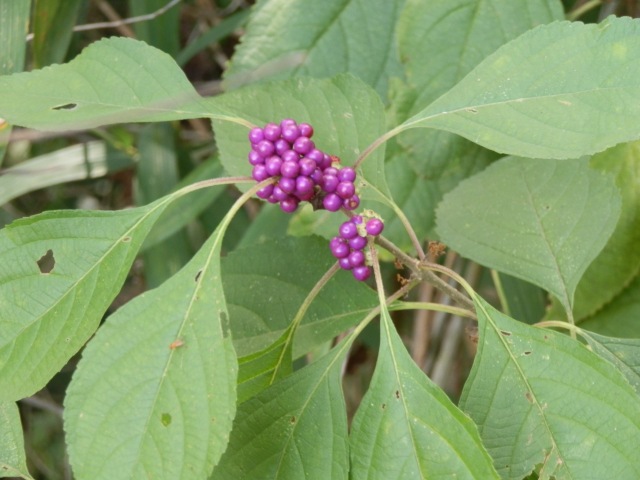 I grew up in Old Town Maine and got a B.S. at the University of Maine in Plant Sciences/ minor in Botany. From there I moved to West Virginia and earned a M.S. in Agronomy at WVU. I also met my wife there. She grew up in rural WV as the daughter of tenant farmers who raised cattle and hogs. Their lifestyle at times was one of subsistence and I learned a lot from them. I've always been a foraging buff, but combining my formal botanical knowledge with their practical 'Foxfire-type' background opened up my eyes a little more. I recently retired from teaching high school agriculture after 25 years teaching with my wife. Until recently I wrote a weekly nature/foraging column for the local paper (dailyadvance.com). I also have written several Christian nature/adventure novels that can be purchased on Amazon in Kindle format. One is a five book family saga I call the 'Forgotten Virtues' series. In the first book, Never Alone (presently out of print), a young boy comes of age after his father dies in a plane crash, and he has to make it alone. The second book, Strange Courage, takes Carl from his High School graduation to his recovery from a nasty divorce. The third book, Second Chances, takes Carl from his ex-wife's death and the custody of his son to his heroic death at age 59. The fourth book, Promises Kept, depicts how his grandchildren react and adjust to his death (this one is not yet published). In the final book, Grandfather's Way, his youngest and most timid granddaughter emerges from the shadow of her overachieving family and accomplishes more in four months than most do in a lifetime. I use many foraging references with a lot of the plants I profile in these articles in those books. I also wrote a romance novel titled Virginia. It is available on Amazon and is a different type of romance from a man's perspective.
View all posts by tedmanzer →
This entry was posted in foraging and tagged beautyberry, edible, fall, foraging, insect repellant, iridescent purple, jelly, nature. Bookmark the permalink.