Bay leaf has been a culinary staple dating back to ancient Greek civilizations. Cooks use it fresh or dry. Many won’t serve spaghetti sauce without it, but few grow their own.

Bay leaves come from a medium to large evergreen shrub known as bay laurel. These woody plants can grow 10-12 feet tall. They are not a fast grower, which can be an advantage for their use as a landscape plant.

If your landscape were a comedy act, bay laurel would be the straight man. These shrubs don’t have dominating flowers or intriguing variegated leaves. Their aroma isn’t appreciated until we use them in cooking or simmering potpourri. They do have a dense growth habit which makes a great hedge or foundation plant.

Leathery leaves with a smooth edge emerge from stems singly. Flowers are pale yellow-green and less than half an inch in diameter. They are born in pairs beside a leaf. Plants are dioecious, meaning entire specimens are either male or female. Fruits ripen in early winter but aren’t used in cooking or as a major food source for wildlife.

Unless planted in a protected spot shrubs risk cold temperature injury in a harsh winter. Other than that they have few pest or disease problems. Bay laurel thrives in a variety of soils and tolerates shade but is more adaptable to sunny locations. Plants have extremely good drought and heat tolerance. Deer don’t like them either.

Sometimes called sweet bay, they are native to the Mediterranean region and are no relation to the sweet bay magnolias found in our swamps. Early Greeks and Romans used the aromatic leaves in many different ways. The leaves have maximum oil content during early and mid-summer.

I find they still give sufficient flavor to marinara sauce through their dormant season. Generally, leaves are removed before eating. They have sharp edges that can irritate gums and out digestive system. However, I have seen recipes where leaves are used in ground form.

In addition to culinary use, many people use extracts from sweet bay to fight dandruff. To prepare this herbal rinse, boil a quart of water and add about three level teaspoons of crushed bay leaves. Let the leaves steep in the covered pot for about twenty-five minutes.

To use this concoction, wash and rinse hair as usual. Then rinse again with this tea-like preparation. After some vigorous massaging, rinse with this solution again. Leave the concoction on the hair for an hour or so. Then rinse with plain water. According to numerous sources, regular use will keep dandruff from recurring.

This same tonic is sometimes used internally to treat an upset stomach and reduce gas. Its strong diuretic properties will rid the body of excess water. This could be a problem during hot summer days.

Many sources tout the high nutritional value of bay laurel foliage. High levels of Vitamins A and C as well as folic acid reside in these leaves. To take advantage of these vitamins chew on the fresh leaves as cooking denatures most vitamins. 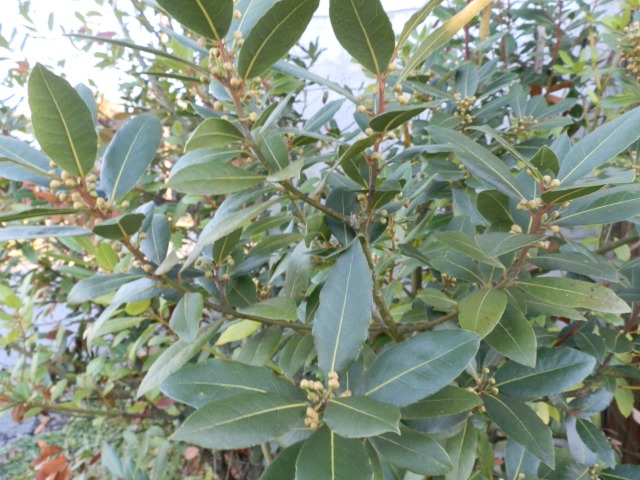 I grew up in Old Town Maine and got a B.S. at the University of Maine in Plant Sciences/ minor in Botany. From there I moved to West Virginia and earned a M.S. in Agronomy at WVU. I also met my wife there. She grew up in rural WV as the daughter of tenant farmers who raised cattle and hogs. Their lifestyle at times was one of subsistence and I learned a lot from them. I've always been a foraging buff, but combining my formal botanical knowledge with their practical 'Foxfire-type' background opened up my eyes a little more. I now teach agriculture to high school students at Northeastern High School in Elizabeth City, NC. My wife teaches with me and we make a great team. I also write a weekly nature/foraging column for the local paper (dailyadvance.com). I also have written several Christian nature/adventure novels that I plan to publish eventually. One is a five book family saga I call the 'Forgotten Virtues' series. In the first book, Never Alone, a young boy comes of age after his father dies in a plane crash, and he has to make it alone. Never Alone is now available in paperback, Kindle and Nook. The second book, Strange Courage, takes Carl from his High School graduation to his recovery from a nasty divorce. The third book, Second Chances, takes Carl from his ex-wife's death and the custody of his son to his heroic death at age 59. The fourth book, Promises Kept, depicts how his grandchildren react and adjust to his death. In the final book, Grandfather's Way, his youngest and most timid granddaughter emerges from the shadow of her overachieving family and accomplishes more in four months than most do in a lifetime. I use many foraging references with a lot of the plants I profile in these articles in those books.
View all posts by tedmanzer →
This entry was posted in foraging and tagged bay laurel, bay leaf, diuretic, evergreen shrub, fight dandruff, marinara spice, sweet bay. Bookmark the permalink.