Sometimes spotting the fragrant plant is easy. Magnolias and gardenias have very conspicuous flowers. Nobody could miss them. Fortune tea olive is different.

Clusters of tiny white flowers are tucked among the foliage. They’re easy for our eyes to miss. Fortunately, our noses won’t. These flowers smell so sweet and delicate that I’ve never run into anyone that found them objectionable. Around here blooming season is usually October and most of November. In milder climates plants can bloom all winter.

It doesn’t end there. This versatile evergreen shrub grows fast but can be maintained as a five foot hedge. It also can be trained into a small tree. Fortune tea olive tolerates severe and improper pruning exceptionally well. It’s tough.

Many people mistake this shrub for a holly. When plants are young they have spiny leaves resembling American holly, but leaves emerge from stems in groups of two. Hollies have what we call alternate leaves, arising from stems singly.

Fortune tea olive is often referred to by its Genus name Osmanthus. Translated from Greek, it means fragrant flower. Many variegated and solid green cultivars adorn the North Carolina landscape.

Last winter dished out some cold temperatures, but I saw no winter injury on any local specimens. Most Osmanthus species are listed as hardy to zone 7 but we had a few days last winter below that temperature threshold.

All Osmanthus species require full or nearly full sun for optimal growth. Flowering is especially enhanced by sunlight. They are quite tolerant to a variety of soil conditions though and thrive in all but the wettest soils. Acid soils are not a problem either.

These shrubs display outstanding resistance to damage by deer, rabbits and other wildlife. Plants are also not invasive, so they are environmentally friendly. Best of all, they aren’t disease susceptible and have few insect pest problems either. This season, especially this fall has been tough on trees and shrubbery as far as pests and diseases go.

They seem to compliment so many of our other landscape plants. They make great screens and are dense enough to keep most unwanted guests out, both two and four legged. If they grow too tall they can be pruned back into place.

This evergreen has so many things going for it it’s a shame you can’t eat it. Well, in a way you can. Its flowers make a delightful herbal tea. They also can be added to regular black tea for a sweeter fragrance. Osmanthus flower extracts also create interest when folded into mild flavored cookie or cake dough.

Both the blossoms and the leaves of these plants are used by the perfume industry. I never realized how much until I started researching it. Numerous products are out there. The glowing reports I read almost made me want to go out and buy some. Maybe some other time. 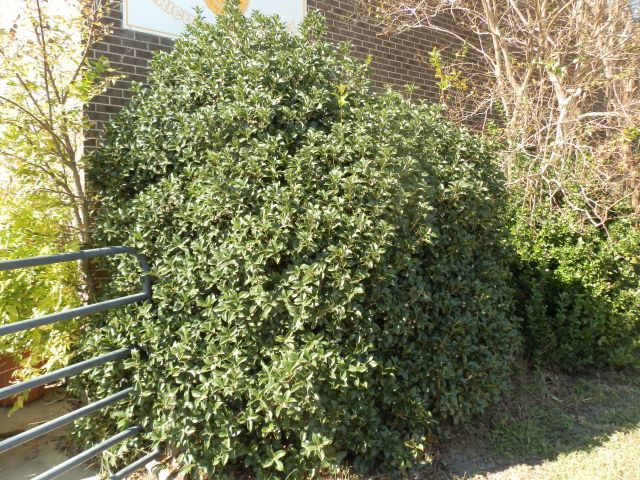 I grew up in Old Town Maine and got a B.S. at the University of Maine in Plant Sciences/ minor in Botany. From there I moved to West Virginia and earned a M.S. in Agronomy at WVU. I also met my wife there. She grew up in rural WV as the daughter of tenant farmers who raised cattle and hogs. Their lifestyle at times was one of subsistence and I learned a lot from them. I've always been a foraging buff, but combining my formal botanical knowledge with their practical 'Foxfire-type' background opened up my eyes a little more. I now teach agriculture to high school students at Northeastern High School in Elizabeth City, NC. My wife teaches with me and we make a great team. I also write a weekly nature/foraging column for the local paper (dailyadvance.com). I also have written several Christian nature/adventure novels that I plan to publish eventually. One is a five book family saga I call the 'Forgotten Virtues' series. In the first book, Never Alone, a young boy comes of age after his father dies in a plane crash, and he has to make it alone. Never Alone is now available in paperback, Kindle and Nook. The second book, Strange Courage, takes Carl from his High School graduation to his recovery from a nasty divorce. The third book, Second Chances, takes Carl from his ex-wife's death and the custody of his son to his heroic death at age 59. The fourth book, Promises Kept, depicts how his grandchildren react and adjust to his death. In the final book, Grandfather's Way, his youngest and most timid granddaughter emerges from the shadow of her overachieving family and accomplishes more in four months than most do in a lifetime. I use many foraging references with a lot of the plants I profile in these articles in those books.
View all posts by tedmanzer →
This entry was posted in foraging and tagged edible flowers, evergreen shrub, fall blooming, Fortune tea olive, fragrant flowers, holly-like foliage, inconspicuous flowers, Osmanthus, perfume, small tree, tolerates severe pruning, versatile evergreen shrub, zone 7. Bookmark the permalink.