I like to try new things. You never know you like or dislike something until you try it, the saying goes. I was perusing Wal-Mart recently and noticed some red spiny looking things 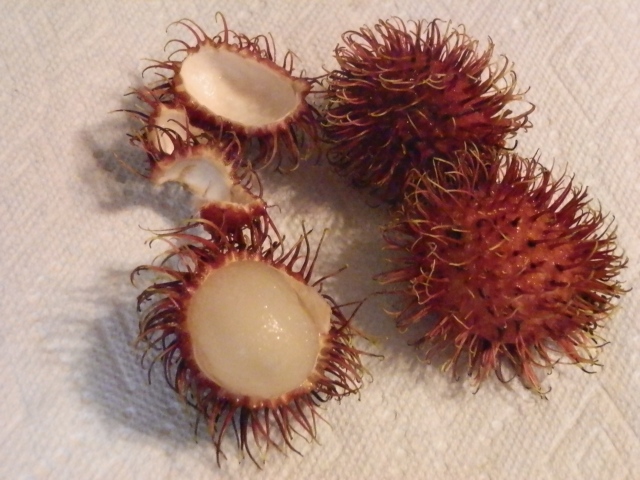 in the produce area. They looked like sea urchins.

They were fruits called rambutan (Nephelium lappaceum), native to Malesia and they’ve spread to surrounding areas. Naturally, I bought some.

They look like they’d tear your hands up, but they are soft and surprisingly easy to peel. The fleshy part under the skin is white to translucent and contains a single elongated seed. The flesh itself has the texture of a peeled grape. According to most sources, the flavor is similar to pears. I think it favors grapes, though that might be because of the texture similarity.

Rambutans are evergreens with foliage that at first glance might remind one a little of hickory or pecan trees. Leaves emerge from stems singly like pecans, but they have a more leathery texture and their edges are smooth.

Rambutan trees are another one of those polygamo-dioecious species. Some are male and some are female and some have both types of flowers. Trees with both flower types usually bear the most fruit. Rambutans produce fruit in spring but a greater quantity in fall.

Don’t expect to grow any of your own unless you have a big greenhouse. Rambutan trees could not possibly survive our winters. They would need to be planted in protected places to survive in south Florida.

Fruits are filled with antioxidants such as vitamin C. They’re also high in essential minerals too, like iron, copper, manganese, calcium and phosphorus. Like nearly all fruits they are also high in fiber.

Wild claims abound on the internet. This fruit is touted as a cure for some cancers. Some researchers claim rambutan can help control blood sugar levels. Others claim that due to high levels of vitamin C, sperm quality and quantity will be increased.

Treatments for many other maladies are also reported also. Therapeutic uses range from treating dysentery to weight loss to headaches to fever. Some even say rambutan can help maintain healthy hair and proper skin hydration. Most treatments involve using other parts of the rambutan tree like leaves and seeds.

Now I’m not saying we should believe everything we read on the internet. I certainly don’t, but I am saying these fruits are definitely safe to eat and they taste pretty good. The slippery texture might be a turnoff to some. Nothing’s perfect.

They are a bit more pricy than our commonly consumed fruits. Being a self-admitted cheapskate, I won’t partake of them on a regular basis. I won’t turn my nose up to them either if some are offered to me. 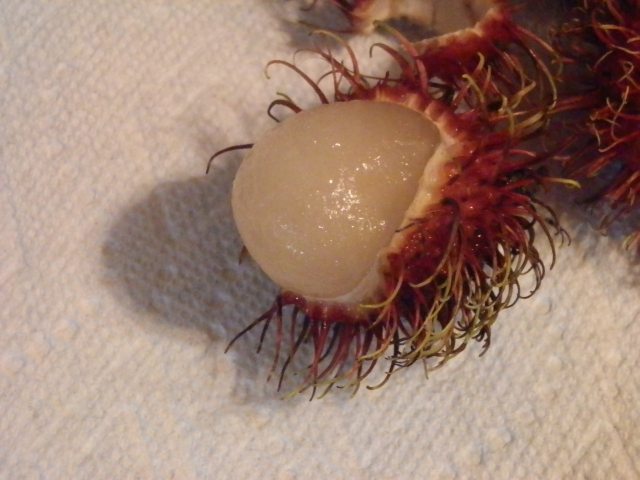 I grew up in Old Town Maine and got a B.S. at the University of Maine in Plant Sciences/ minor in Botany. From there I moved to West Virginia and earned a M.S. in Agronomy at WVU. I also met my wife there. She grew up in rural WV as the daughter of tenant farmers who raised cattle and hogs. Their lifestyle at times was one of subsistence and I learned a lot from them. I've always been a foraging buff, but combining my formal botanical knowledge with their practical 'Foxfire-type' background opened up my eyes a little more. I recently retired from teaching high school agriculture after 25 years teaching with my wife. Until recently I wrote a weekly nature/foraging column for the local paper (dailyadvance.com). I also have written several Christian nature/adventure novels that can be purchased on Amazon in Kindle format. One is a five book family saga I call the 'Forgotten Virtues' series. In the first book, Never Alone (presently out of print), a young boy comes of age after his father dies in a plane crash, and he has to make it alone. The second book, Strange Courage, takes Carl from his High School graduation to his recovery from a nasty divorce. The third book, Second Chances, takes Carl from his ex-wife's death and the custody of his son to his heroic death at age 59. The fourth book, Promises Kept, depicts how his grandchildren react and adjust to his death (this one is not yet published). In the final book, Grandfather's Way, his youngest and most timid granddaughter emerges from the shadow of her overachieving family and accomplishes more in four months than most do in a lifetime. I use many foraging references with a lot of the plants I profile in these articles in those books. I also wrote a romance novel titled Virginia. It is available on Amazon and is a different type of romance from a man's perspective.
View all posts by tedmanzer →
This entry was posted in foraging and tagged antioxidants, Litchi chinensis, look like sea urchins, lychee, Malaysia, Nephelium lappaceum, polygamo-dioecious, Rambutan, red spiny fruits, texture of peeled grapes, tropical, vitamin c. Bookmark the permalink.