It’s so hard to find landscaping with winter interest. Once mid-December hits and freezing temperatures are commonplace, most fall foliage color is gone. Very few flowers and flowering shrubs are blooming either.

Carolina jessamine (Gelsemium sempervirens) still manages to display some yellow funnel shaped flowers, though the full display won’t be realized until spring. Lately mine have been glorious.

Once established, this perennial woody vine really makes impressive growth. Smooth edged evergreen leaves emerge from stems in pairs. This time of year they begin to develop a bronze cast. Foliage growth has stopped for the year, but flowers will pop out periodically throughout the winter during mild spells.

Plants tolerate a wide variety of soils. When they are young they require moist sites but once they become established they tolerate drought very well. Jessamine also has few disease or insect problems.

It’s not a huge fertilizer user but it will respond to regular feeding. It’s important not to over fertilize with nitrogen. Foliage might be gorgeous but flowering will be impaired.

This aggressive vine thrives in full sun. It also performs quite well under partial shade, though blooming is much better in sunny places. Plants can be pruned during any season. In sunny spots with regular pruning it can even be maintained as a ball shaped shrub.

I don’t like to trim them during fall as the chances of winter kill are greater. However, if plants die back some they can be pruned back severely in spring and rejuvenated. Once established they are hard to kill. They even make a good ground cover on steep slopes.

Jessamine covers a fence or trellis with glossy leaves and deer will leave it alone. There’s good reason for that. Every part of the plant is poisonous. Pets generally won’t touch it, but if plants are ingested they could potentially cause problems.

Numerous sources state medicinal uses for the rhizomes of this plant.  Preparations from these underground stems are used to combat fever and severe coughing. They’re also used for some nerve problems like sciatica.  I urge not trying it unless specifically prescribed by a licensed herbalist. Dosage mistakes could be fatal. Less than a teaspoon of crushed rhizome could kill you.

Carolina jessamine is native to our area. For that reason alone it is often coveted for landscape use. Plants can spread into adjacent areas but their invasiveness is far less problematic than that of other woody runners like trumpet vine, Japanese honeysuckle or wisteria. I’ve never seen Carolina jessamine crowd out and kill other vegetation like those do.

Still, since they are a vine they must be contained somewhat. If that is a problem maybe they aren’t for you. As for me, I like color and this vine has got it. Best of all, it often blooms when little else does. 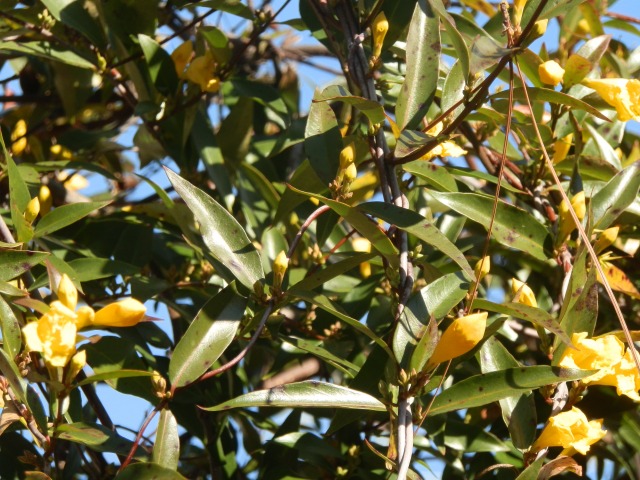 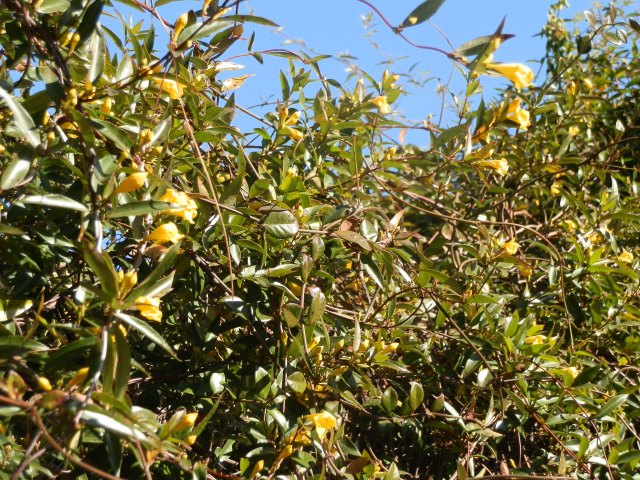 I grew up in Old Town Maine and got a B.S. at the University of Maine in Plant Sciences/ minor in Botany. From there I moved to West Virginia and earned a M.S. in Agronomy at WVU. I also met my wife there. She grew up in rural WV as the daughter of tenant farmers who raised cattle and hogs. Their lifestyle at times was one of subsistence and I learned a lot from them. I've always been a foraging buff, but combining my formal botanical knowledge with their practical 'Foxfire-type' background opened up my eyes a little more. I now teach agriculture to high school students at Northeastern High School in Elizabeth City, NC. My wife teaches with me and we make a great team. I also write a weekly nature/foraging column for the local paper (dailyadvance.com). I also have written several Christian nature/adventure novels that I plan to publish eventually. One is a five book family saga I call the 'Forgotten Virtues' series. In the first book, Never Alone, a young boy comes of age after his father dies in a plane crash, and he has to make it alone. Never Alone is now available in paperback, Kindle and Nook. The second book, Strange Courage, takes Carl from his High School graduation to his recovery from a nasty divorce. The third book, Second Chances, takes Carl from his ex-wife's death and the custody of his son to his heroic death at age 59. The fourth book, Promises Kept, depicts how his grandchildren react and adjust to his death. In the final book, Grandfather's Way, his youngest and most timid granddaughter emerges from the shadow of her overachieving family and accomplishes more in four months than most do in a lifetime. I use many foraging references with a lot of the plants I profile in these articles in those books.
View all posts by tedmanzer →
This entry was posted in foraging and tagged Carolina jessamine, deer resistant, full sun, Gelsemium sempervirens, glossy leaves, ground cover, invasiveness, moist sites, partial shade, perennial woody vine, poisonous, wide variety of soils, yellow flowers. Bookmark the permalink.