Winter foraging can be fun and challenging

Collecting edibles near your home can be a satisfying and money-saving hobby. It’s fun realizing there are things right under your nose that are tasty and available in quantities needed for a family meal.

Winter is a lean time of the year though. Squirrels are steadily cleaning up all the pecans and planting them everywhere, especially in our flowerbeds. They have a slightly harder time moving black walnuts around, so many of them could be lying around near the trees. If the grass is thick you might need a rake to find them.

Live oak (Quercus virginiana)  are the only acorns I collect. They’re often fine to eat without any treatment at all. However, squirrels like them too, and bushytails can clean up a tree in a hurry.

Another favorite that often hasn’t been ravaged by squirrels or deer is the beechnut (Fagus grandiflolia). These require a little processing, but they can make a great addition to a pancake or biscuit mix. Collect the little triangular nuts and roast them on a cookie sheet at a low oven temperature. Crush the nuts and separate the meal from the chaff. Add to your favorite baking mix. The taste will remind you of buckwheat.

Most fleshy fruits like crabapples (Malus sp.) are falling prey to birds. Grapes have long since passed. Rose hips are a possibility. They don’t usually develop well on knock out roses, but the ones on rugosa roses (Rosa rugosa) are very tasty and loaded with vitamin C.

Here in eastern North Carolina, our winters aren’t severe, so there’s a lot of plant growth still going on. It’s not like summer, and selection can be limited, but if you’re a fan of greens, you’re in luck. Flavors are many and varied.

If you like mild greens that can be consumed raw or cooked with equal delectable results, then common chickweed (Stellaria sp.) is for you. It’s coming out in full force now and should be in good supply throughout the winter. Plants are tender and pointed teardrop-shaped bright green leaves emerge in groups of two.

There’s also another benefit from foraging this one. You won’t have to fight it in your flowerbeds next spring. For best results, get chickweed before you see the white flowers.

If you like a little more bite to your greens, try collecting some bittercress (Cardamine hirsuta). It has featherlike leaves that radiate around a central stem. Its flavor reminds me of kale, and this one’s also great fresh or cooked. As spring advances, the foliage will get progressively more pungent. Sowthistle (Sonchus sp.) makes a good green raw or cooked, but it gets fibrous when it gets old.

If pungent is your pleasure, most grassy areas have a good supply of wild field garlic (Allium vineale). I’m always surprised when I talk to folks about this one. It’s not poisonous. All parts of the plant are edible, but I don’t often mess with the below-ground portion. It’s a lot of work cleaning up each bulblet. I prefer to clip the green above-ground portion.

These happen to be some of my favorite wild winter foods. Always be aware when collecting from any area that pesticides were not used. It’s not worth the risk.

common chickweed is in all my flowerbeds

bittercress has a delightfully spicy flavor. 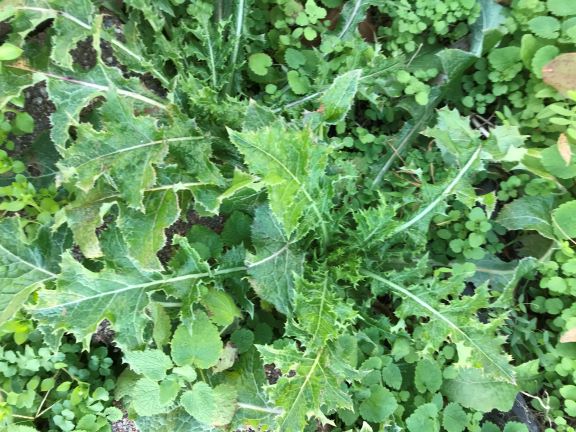 Field garlic has the flavor to spice up all sorts of things.

I grew up in Old Town Maine and got a B.S. at the University of Maine in Plant Sciences/ minor in Botany. From there I moved to West Virginia and earned a M.S. in Agronomy at WVU. I also met my wife there. She grew up in rural WV as the daughter of tenant farmers who raised cattle and hogs. Their lifestyle at times was one of subsistence and I learned a lot from them. I've always been a foraging buff, but combining my formal botanical knowledge with their practical 'Foxfire-type' background opened up my eyes a little more. I now teach agriculture to high school students at Northeastern High School in Elizabeth City, NC. My wife teaches with me and we make a great team. I also write a weekly nature/foraging column for the local paper (dailyadvance.com). I also have written several Christian nature/adventure novels that I plan to publish eventually. One is a five book family saga I call the 'Forgotten Virtues' series. In the first book, Never Alone, a young boy comes of age after his father dies in a plane crash, and he has to make it alone. Never Alone is now available in paperback, Kindle and Nook. The second book, Strange Courage, takes Carl from his High School graduation to his recovery from a nasty divorce. The third book, Second Chances, takes Carl from his ex-wife's death and the custody of his son to his heroic death at age 59. The fourth book, Promises Kept, depicts how his grandchildren react and adjust to his death. In the final book, Grandfather's Way, his youngest and most timid granddaughter emerges from the shadow of her overachieving family and accomplishes more in four months than most do in a lifetime. I use many foraging references with a lot of the plants I profile in these articles in those books.
View all posts by tedmanzer →
This entry was posted in foraging and tagged "live oak", beechnut, bittercress, Black Walnut, common chickweed, Crabapple, pecan, rugosa rose, sowthistle, wild field garlic. Bookmark the permalink.

2 Responses to Winter foraging can be fun and challenging