Pencil cactus is an interesting but poisonous houseplant

I get a lot of questions about poisonous plants. Many species, both interior, and exterior can contain poisonous chemicals. Most aren’t a major concern. In fact, many of our common houseplants are considered poisonous, but they are found everywhere. Often, we see them in public places frequented by pets or small children.

Poinsettias are common Christmas decorations, and they have poisonous latex in them. If we get this latex on our hands and then rub our eyes, we’ll be sorry. However, the same can be said for touching habanero peppers.

Elderberries are quite poisonous prior to ripening. In large quantities, nutmeg can cause dizziness, drowsiness and seizures. Apple seeds and cherry pits contain cyanide compounds. Potatoes exposed to light contain glycoalkaloids. These can even cause death. Raw cashews contain the same compound found in poison ivy.

Pencil cactus (Euphorbia tirucalli) is a poinsettia relative. It has a reputation for being extremely poisonous. I’ve even had folks ask me why we have it in our greenhouses. The answer is simple. We keep poisonous cleansers under our sinks. Who worries about that? We even eat foods containing poisonous components like the ones already mentioned.

I wouldn’t place pencil cacti around unsupervised toddlers or puppies, but they are an attractive and intriguing houseplant for well-lit places. The white latex is the only toxic part, and these plants have no thorns.

They’re great in succulent dish gardens, but after a year or two, they often must be separated and planted by themselves. Eventually, they can become large. I’ve seen these Euphorbias well over six feet tall indoors.

Pencil cacti require very little maintenance and they can be pruned without causing harm to the plant. The white sap can be a skin irritant to some. It will cause severe eye problems for most people.

People allergic to latex are especially susceptible to eye irritations, and in some cases have even gone temporarily blind. Corneas can be totally burned out. I wouldn’t recommend people with latex allergies keeping this plant or others containing latex. Otherwise, washing with soap and warm water immediately after handling will remove the toxins and avoid any problems.

Pencil cacti are also toxic to pets. The sap can cause irritation to the mouth and digestive system, but generally, toxicity is overrated. Many other plants like daffodils are potentially a greater concern for pets. Oleander, Aloe vera, castor beans and tomato foliage are common plants that can be problematic for canines.

Ingesting the sap from pencil cactus is not common. Numerous articles warn us that it’s toxic, but the sap is so bitter I doubt even the most curious toddler could tolerate swallowing enough to be life-threatening.

Dumbcane is another houseplant often touted as extremely toxic. It contains calcium oxalate crystals, which cause burning and tongue paralysis. Symptoms are mild and temporary, and I suspect children and pets wouldn’t consume enough to hurt them.

We have houseplants for decoration, and pencil cacti make striking contrasts to our other plants. Furthermore, any plants with latex are likely to cause skin and eye irritations. Keep that in mind. 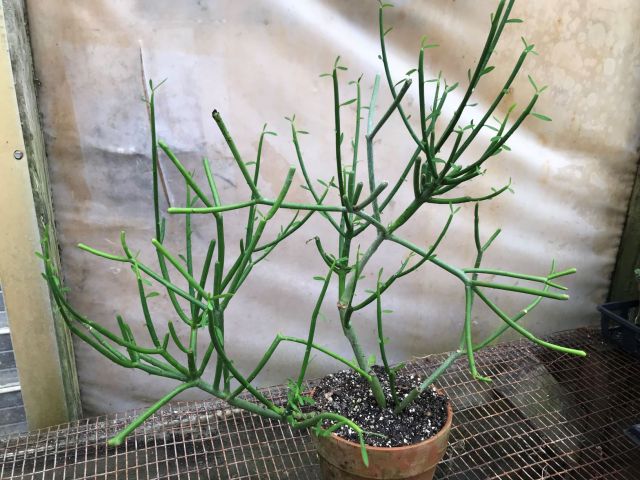 This young pencil cactus is thriving in the greenhouse.

I grew up in Old Town Maine and got a B.S. at the University of Maine in Plant Sciences/ minor in Botany. From there I moved to West Virginia and earned a M.S. in Agronomy at WVU. I also met my wife there. She grew up in rural WV as the daughter of tenant farmers who raised cattle and hogs. Their lifestyle at times was one of subsistence and I learned a lot from them. I've always been a foraging buff, but combining my formal botanical knowledge with their practical 'Foxfire-type' background opened up my eyes a little more. I now teach agriculture to high school students at Northeastern High School in Elizabeth City, NC. My wife teaches with me and we make a great team. I also write a weekly nature/foraging column for the local paper (dailyadvance.com). I also have written several Christian nature/adventure novels that I plan to publish eventually. One is a five book family saga I call the 'Forgotten Virtues' series. In the first book, Never Alone, a young boy comes of age after his father dies in a plane crash, and he has to make it alone. Never Alone is now available in paperback, Kindle and Nook. The second book, Strange Courage, takes Carl from his High School graduation to his recovery from a nasty divorce. The third book, Second Chances, takes Carl from his ex-wife's death and the custody of his son to his heroic death at age 59. The fourth book, Promises Kept, depicts how his grandchildren react and adjust to his death. In the final book, Grandfather's Way, his youngest and most timid granddaughter emerges from the shadow of her overachieving family and accomplishes more in four months than most do in a lifetime. I use many foraging references with a lot of the plants I profile in these articles in those books.
View all posts by tedmanzer →
This entry was posted in general nature and tagged Euphorbia tirucalli, latex, no thorns, pencil cactus, poisonous, skin irritant. Bookmark the permalink.

4 Responses to Pencil cactus is an interesting but poisonous houseplant